Appetite for Art and Artifacts 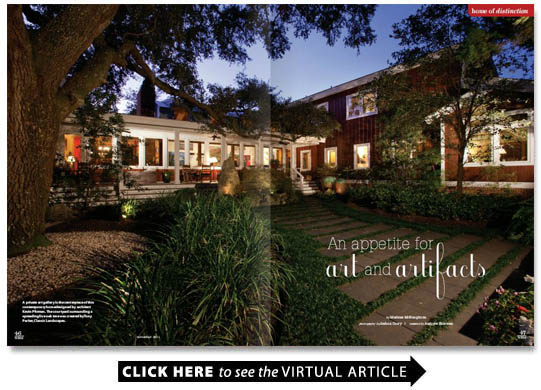 The slit drumlanky breadfruit timbers carved with totemic facial featuresrepresents a rite of passage to the indigenous New Hebrides people and their ceremonial culture. It is said that when a man accumulates enough wealth represented by his herd of pigs he pays for a drum to be made and advances to a higher social status.

You will find no pigsducks perhaps but no swinebeyond the threshold.

But the incongruous pairing of the Vanuatu artifacts with an 1854 rosewood low signature Steinway box grand piano yes amid other juxtapositions at this Joshuas Landing contemporary waterfront home a repository for its residents eclectic collection of artifacts antiquities and fine art.

For the first time in their lives the intrepid worldly couple hired an architect Kevin Pfirman to create a house with the gallery at the center that would showcase their prized acquisitions amassed during decades of living and traveling in the continental U.S. and abroad. The slit drums and Steinway rangelike their cultivated palatefrom one extreme to the other. Tribal masks and figures are displayed on pedestals on an Asian carpet that blankets a Cape Fear Riverwood floor. Hundreds of pieces of cypress form the puzzling vaulted ceiling that soars above it. Buttressed by exposed beams the upper walls of this private art gallery are perforated with clerestory windows. Three of the gallerys interior walls are lined with paintings. The fourth wall framed by posts opens to the adjacent corridor.

Like an orange peeled the architecture reveals an exposed structurea collection of sectionsand supports the massing of the house where the wingsone for living and entertaining the other for sleeping and repairingconverge in the middle surrounding the gallery and its adjacent dining room.

The floorplan supports the wandering of guests from the gallery and the dining room into the corridor. The corridors glazed exterior doors open onto a covered porch. Porch steps lead down into a secluded courtyard. Looking back at the home from the courtyard the gallery and dining room sparkle like jewels inviting guests to float into and out of Mort and Judy Nebletts stunning Hewletts Creek home.

Judy Neblett spent a year working with Pfirman to design the structure.

“It is the first time we dont have a formal living room ” Mort says. “We had been traditional people ” he continues. “Its a fun house.”

Judy describes their previous home a historic dwelling on the Intracoastal Waterway and Masonboro Sound. “You came into a small entryway and then it was a two-story gallery ” but their appetite for art and antiquities outgrew the space. “Here we were seven years ago not ready to get rid of our art. Our kids cant take it; its too big. We realized we needed to build.”

Having lived abroad for long periodsthe Nebletts once visited the home of silk industrialist Jim Thompson. Thompsons famed House on the Klong in Bangkok was assembled from multiple Thai country dwellings which Thompson filled with collectibles. In spite of his beautiful objects the house itself had an enviable sense of calm for which the Nebletts had searched the globe.

“I spent a lot of my life traveling overseas on business ” Mort says. Using Thompsons Bangkok house as a model Mort adds “Kevin did exactly what we asked him to do.”

Having owned a gallery for a short while Judy a former art history major says she and Mort have collected art forever. “Everything we have means a lot to us and our life ” she says. “Weve been married for almost 46 years so weve really collected for a long time.”

The Nebletts also possess an unbridled reverence for place. From his early days as a Wilmingtonian and a Wrightsville Beach boy and her childhood spent in Pennsylvanias Brandywine River region the Nebletts honored the natural setting.

Case in point at the far corner of the homes living wing is Morts office.

“Its a great place to have an office ” he says. Gesturing toward the view of the creek he explains “This is tidal so later in the day it will be completely high; you wont see any of the oyster beds.”

“I like ducks and I like the out of doors ” says Mort a game hunter as well as an artifact hunter.

“We used to go to flea markets before they were a big deal ” Judy says. One local antique dealer auctioneer D.C. North was instrumental in rounding out the decoy collection. “Most of these are by known carvers ” Mort says.

The waterbird collection some pieces more than 100 years old one cork bird decoy that was “shot over” by Teddy Roosevelt hunting on Quogue Long Islandrepresents well-known North Carolina and Virginia decoy carvers Ned Burgess and Alvira Wright to name two that North helped Neblett curate during a long fertile period of collecting.

“I thought we would miss living on the waterway because you could look straight across to the ocean but I love this because I love birds ” Judy says. “We see all kinds of birds.”

Covering the floor of Morts bird room is a textile woven by Sinai nomads. “They dont make rugs like Persians but they weave pretty pieces. Somebody a merchant put an edge on it. I just liked the colors ” he says.

Throughout the home the floors are carpeted with rugs from the Far East to the Middle East China and Iran. Lamps made from Thai temple drums and a repurposed sheep shearers table are functional living room accessories as well as conversation pieces; in the dining room Afghan lintels above the mantel and a table they have carted around ever since they lived in Australia in the 1960s tell part of their story. Everywhere there is art on canvaspaintings by Maude Gatewood and outsider artist Howard Finster; Tiffany art glass displayed near $25 trinkets from Harbor Island Antiques; clay tiles from the British Museum gift shop and a clay teapot from the Cameron Art Museum gift shop.

When they found it the land had long been Joshua Franks farm an area also used by hunters who would bring their kills to the creek bank for field dressing leaving the carcasses behind. When the Nebletts chose the site for their home the U.S. Department of Agriculture awarded them a grant to clean it up. In addition as stewards of the natural wetland area they are required to meet certain criteria establishing an osprey nest platform a rain garden and planting only vegetation that is indigenous to southeastern North Carolina.

Now pavers crease lush carpets of grass to form pathways and as many as 50 urns imported from Asia are potted with tropical specimens that Mort cultivates and maintains himself.

One of the sites biggest challenges was designing and building the house around a spreading live oak tree. “We actually cantilevered over the roots of the tree ” Judy explains “so the roots are not disturbed by the house.” Supported by concrete pilings and steel girders the wings of the house form a large horseshoe. “It made sense to make a big U ” Judy adds “and it made sense to have you come into the gallery.”

Because of the northern exposure and the heavy tree canopy few plants would grow inside the courtyard designed by Tony Parker of Classic Landscapes. Scott McGhee was the onsite arborist. Today a statement rock pirated from the northeast Cape Fear River is surrounded by a split-leaf Japanese maple ornamental grasses and quilted moss.

The courtyard view is also framed through the couples master suite windows on the ground floor of the two-story three bedroom three and a half bath wing.

“It is so calming to look out here ” Judy says.