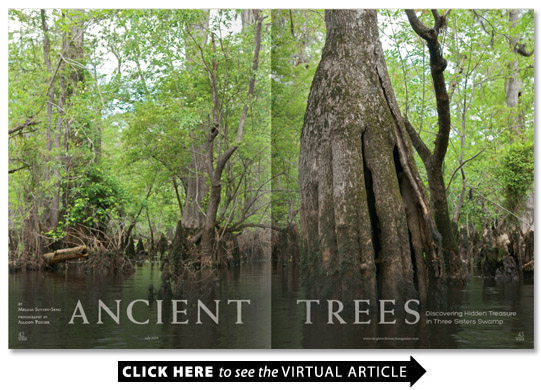 Scientists and conservationists have discovered a North Carolina tree that is 2 624 years old making the bald cypress the fifth-longest living tree species on earth.

Two creeks merge in Sampson County giving birth to the Black River which winds through Pender and Bladen counties before joining the Cape Fear River 66 miles downstream. In one particular spot the Black splits into smaller channels and the floodplain widens creating an enchanting place rather unenchantingly named Three Sisters Swamp.

Nature lovers and kayakers have long admired Three Sisters isolated and quietly teeming with life. Cypress knees and stumps jut out of the water creating space for green mosses to grow and ivies to take root. In May and June spider lilies begin to spring up in the thick black mud along the shore bright white starbursts against the dark browns and greens of the undergrowth. Spanish moss hangs in gray curtains from the trees. By night river otters feast on mussels dug up from the bone-white sand of the river bottom and leave the pearlescent shells to decorate fallen logs. Birds flit about overhead chirping and calling and singing from the branches of the bald cypress trees that make this swamp not only hauntingly beautiful but unique in the natural world.

In 1981 conservationist Julie Moore was working for the North Carolina Natural Heritage Program. Knowing she was documenting natural areas in the coastal plain a forester named Dan Gilbert invited Moore to Cone’s Folly hunting preserve saying he had some trees to show her. A curious invitation Moore thought coming from a man who was in the business of cutting down trees. Moore met Gilbert at a logging camp one early fall day and the pair rode in an old pickup to a swamp on the Black River and fell silent taking it in as scores of wood ducks descended for the evening into the shelter of the bald cypress trees along the banks. “It was one of those times that you know someone is sharing with you something that is very important to them ” Moore says. She knew immediately that Three Sisters was a special place.

To the untrained eye Three Sisters Swamp is an unlikely candidate for a forest of huge ecological and scientific importance. The brown water is reminiscent of tea steeped too long and the trees are not especially tall nor surprisingly wide. In fact the water is among the purest in North Carolina turned brown not by runoff or other pollution but by naturally decaying plant material. The state named the Black River an “Outstanding Resource Water” in 1994. It’s the cypress trees gnarled with age many hollowed by core rot that make Three Sisters truly incredible. There is no place like it in the world.

Four years after she was first introduced to Three Sisters Moore invited Dr. David Stahle of the University of Arkansas to come visit. He was at first barely interested. Stahle is a scientist and he was looking not for bald cypress but for post oaks. As a dendrochronologist he studies extremely old trees to uncover what they can teach us about climate conditions over long periods of time. Stahle was not especially excited about seeing Moore’s cypress trees but he came anyway. That choice would eventually lead to the discovery of the oldest cypress trees on earth. Over the course of the middle to late 1980s Stahle and his team explored and researched in the Three Sisters Swamp and determined that some trees there were at least 1 200 years old. One tree named Methuselah by locals dated to 364 AD.

In 1990 The Nature Conservancy a nonprofit organization whose mission is “to conserve the lands and waters on which all life depends ” began acquiring land for conservation along the Black River. Nature Conservancy employees survey and monitor areas under their management and provide educational resources for locals and visitors. They work closely with the scientific community to identify ecologically significant areas in need of protection and to conduct research in areas already under conservation. Thanks to donations and conservation easements the organization protects 19 000 acres of land along the Black River including the Three Sisters Swamp.

Angie Carl came to Wilmington to work for The Nature Conservancy in 2004. Three Sisters was her first exposure to old-growth swamp forests and she assumed swampland everywhere was as beautiful and captivating as the area she was newly tasked with managing. Not until Stahle returned for further research in 2015 did Carl learn how unique the Black River and Three Sisters Swamp are. Carl recalls trudging through the swamp with the research team counting trees an excited Stahle stopping every few minutes to exclaim how magnificent the forest was how remarkable — and how surprisingly old even to him — the cypress trees appeared to be. The team bored long thin cross-sections from the weathered cypress trees and transported the samples back to Stahle’s Arkansas lab for analysis. The results were record-breaking: Amid a forest of thousand-year-old cypresses stands a truly ancient tree that is 2 624 years old.

A bald cypress grows unlike other trees a wide swollen base flaring out below a slender trunk and a distinctive root system sending “knees” jutting up out of the water or ground near the tree. As the tree matures the basal swell becomes less pronounced the trunk thickening to closer match the size of the base. You can glean clues about a cypress’s age by observing as Stahle calls it the “gnarl factor.” Ancient trees have withstood many storms and you can observe healed wounds from limbs blown away decades or even centuries ago. This particular ancient tree took root about the year 605 BCE. At that same time King Nebuchadnezzar had recently come into power in Babylon and had begun construction of his (fabled) Hanging Gardens. Neither the Roman Colosseum nor the Great Wall of China had been built. The tree rings tell tales recording a severe drought that might help explain the disappearance of the Lost Colony at Roanoke. The bald cypress forest creates a kind of temple on the water suspending time and turning a kayak trip into a meditation on the transcendence of nature.

The Black River and sites like Three Sisters are important to our shared history and you don’t need to be a scientist or professional conservationist to help care for them. Donations to organizations like The Nature Conservancy enable the protection of these areas. Phone calls and letters to elected officials go a long way toward ensuring natural resources are around for generations to come. Everyday actions like correctly disposing of chemicals and motor oil limiting the use of fertilizers and pesticides and choosing cleaning products that are safe for river ecosystems are all practical ways too. Whether you’re an outdoor enthusiast a local history buff or simply a lover of nature there are many ways to participate in the ongoing preservation of the Three Sisters Swamp and its ancient trees natural wonders more enduring than much that human civilization has built.