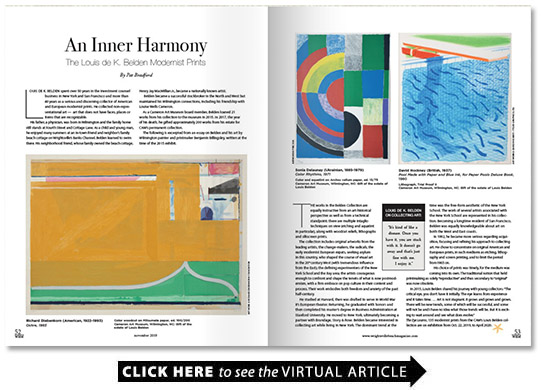 Louis de K. Belden spent over 50 years in the investment counsel business in New York and San Francisco and more than 40 years as a serious and discerning collector of American and European modernist prints. He collected non-representational art — art that does not have faces places or items that are recognizable.

His father a physician was born in Wilmington and the family home still stands at Fourth Street and Cottage Lane.As a child and young man he enjoyed many summers at an in-town friend and neighbor’s family beach cottage on Wrightsville’s Banks Channel. Belden learned to swim there. His neighborhood friend whose family owned the beach cottage Henry Jay MacMillian Jr. became a nationally known artist.

Belden became a successful stockbroker in the North and West but maintained his Wilmington connections including his friendship with Louise Wells Cameron.

As a Cameron Art Museum board member Belden loaned 21 works from his collection to themuseum in 2015. In 2017 the year of his death he gifted approximately 200 works from his estate for CAM’spermanent collection.

The following is excerpted from an essay on Belden and his art by Wilmington painter and printmaker Benjamin Billingsley written at the time of the 2015 exhibit.

The works in the Belden Collection are equally instructive from an art-historical perspective as well as from a technical standpoint: there are multiple intaglio techniques on view (etching and aquatint in particular) along with woodcut reliefs lithographs and silkscreen prints.

The collection includes original artworks from the leading artists the change-makers the radicals the early modernist European expats seeking asylum in this country who shaped the course of visual art in the 20th century West (with tremendous influence from the East); the defining experimenters of the New York School and the Bay area; the artists courageous enough to confront and shape the tenets of what is now postmodernism with a firm embrace on pop culture in their content and process. Their work embodies both freedom and anxiety of the past half-century.

He studied at Harvard then was drafted to serve in World War II’s European theater. Returning he graduated with honors and then completed his master’s degree in Business Administration at Stanford University. He moved to New York ultimately becoming a partner with Brundage Story & Rose.Belden became interested in collecting art while living in New York. The dominant trend at the time was the free-form aesthetic of the New York School. The work of several artists associated with the New York School are represented in his collection. Becoming a longtime resident of San Francisco Belden was equally knowledgeable about art on both the West and East coasts.

In 1992 he became more serious regarding acquisition focusing and refining his approach to collecting art. He chose to concentrate on original American and European prints in such mediums as etching lithography and screen printing and to limit the period from1965 on.

His choice of prints was timely for the medium was coming into its own. The traditional notion that held printmaking as solely “reproductive” and thus secondary to “original” was now obsolete.

In 2015 Louis Belden shared his journey with young collectors: “The critical eye you don’t have it initially. The eye learns from experience and it takes time. … Art is not stagnant. It grows and grows and grows. There will be new trends some of which will be successful and some will not be and I have no idea what those trends will be. But it is exciting to wait around and see what does evolve.”The Eye Learns 135 modernist prints from the CAM’s Louis Belden collection are on exhibition from Oct. 22 2019 to April 2020.