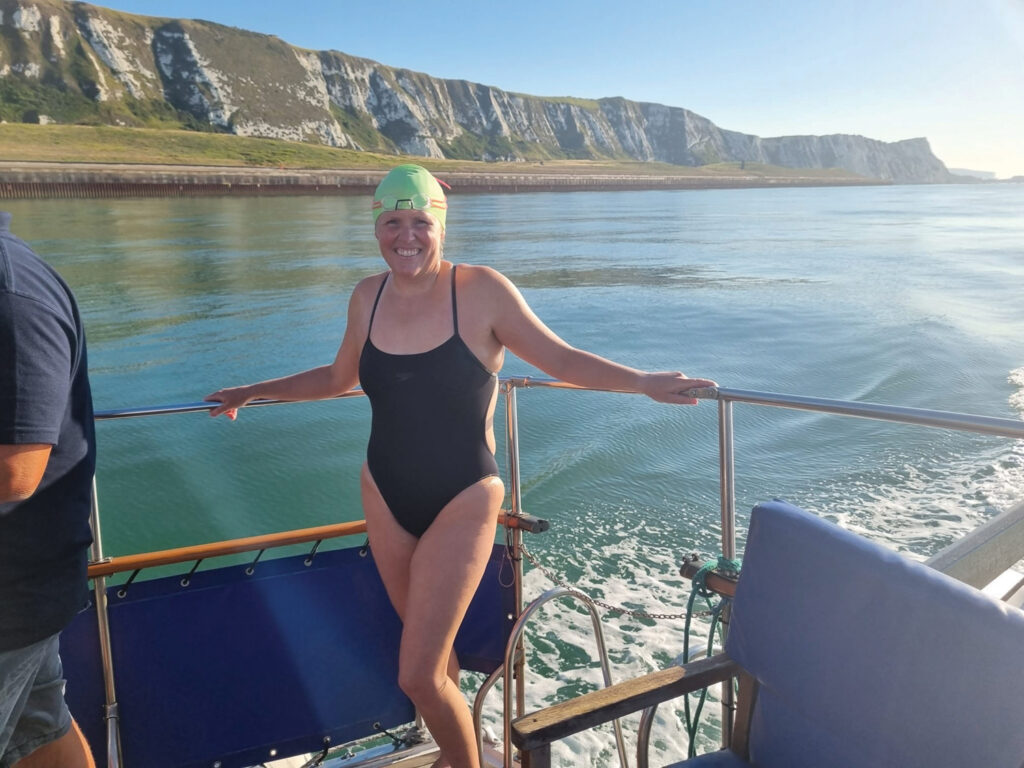 When she was a child, Laura Goodwin decided that she would someday swim from England to France. That day came on July 11, when Goodwin completed the storied English Channel swim.

“It is finally beginning to sink in that I made it,” she said a couple of days later. “What I feel right now is amazing and grateful. It was a perfect day in the Channel, where I realized a lifelong dream. So very many people came together to make that happen for me. A huge thank-you to all of them!”

Goodwin acknowledged the difficulty of the task in an interview with Wrightsville Beach Magazine a few months before the attempt (“The Improbable Dream” April 2022).

“There are a lot of things that can stop you in the Channel,” she said.

As it turned out, she was indefatigable. Nothing — not the cold water, not wind, not waves, not jellyfish and not fatigue — could keep her from fulfilling her childhood dream. Goodwin completed the 21-mile swim in a relatively swift 10 hours and 44 minutes.

“It was hard, but mostly I managed to have a really good time,” she said. “My crew was fantastic, the conditions were amazing, and it was very easy to keep a great attitude going and to enjoy the results of my years of training and preparation.”

Goodwin is a swim and triathlon coach based in Raleigh. Her training included a lot of open-water training in Wrightsville Beach.

The English Channel swim ranks among the toughest endeavors in the world of endurance sports — “crazy hard,” as Goodwin put it. As of July 5, there were just 2,248 documented solo crossings since 1875. Only 773 of those were by women. By comparison, about 4,000 people have successfully summited Mount Everest.

Goodwin’s training had prepared her for success, and with ideal weather conditions she had a good feeling about her attempt. But she didn’t want to celebrate prematurely.

“I had a very strong urge not to jinx myself, so in one sense [I knew I was going to make it] when I touched France,” she said. “But one of my favorite ways of motivating myself — that I have been using since I was a 12-year-old swimming on my age group team at the YMCA in Clarksburg, West Virginia — is, ‘If you can make it halfway, you can make it all the way.’ You can bet I was telling myself that once I made it into the French shipping lanes!”

French authorities allow English Channel swimmers to touch their country’s soil, but they don’t allow them to linger. As soon as she completed the swim, Goodwin had to climb into the pilot boat and return to England. So the immediate future includes a longer stay on the continent with her family, who have been based in England since March.

“Now that both kids are out of school, the next thing on the list is to travel to France and throughout Europe. I’m very excited. As much as I really love open-water swimming, I’m really ready to see something other than greenish seawater at this point!”

“I have already told my husband that ‘The Year of Eric’ has now begun,” she said. “But I’m definitely thinking about an Ironman Triathlon at some point in the future. And there are a lot of beautiful, warm places to swim — that sounds pretty attractive right now as well. But first, rest, regroup, and show other people the kind of support that they have shown me!”