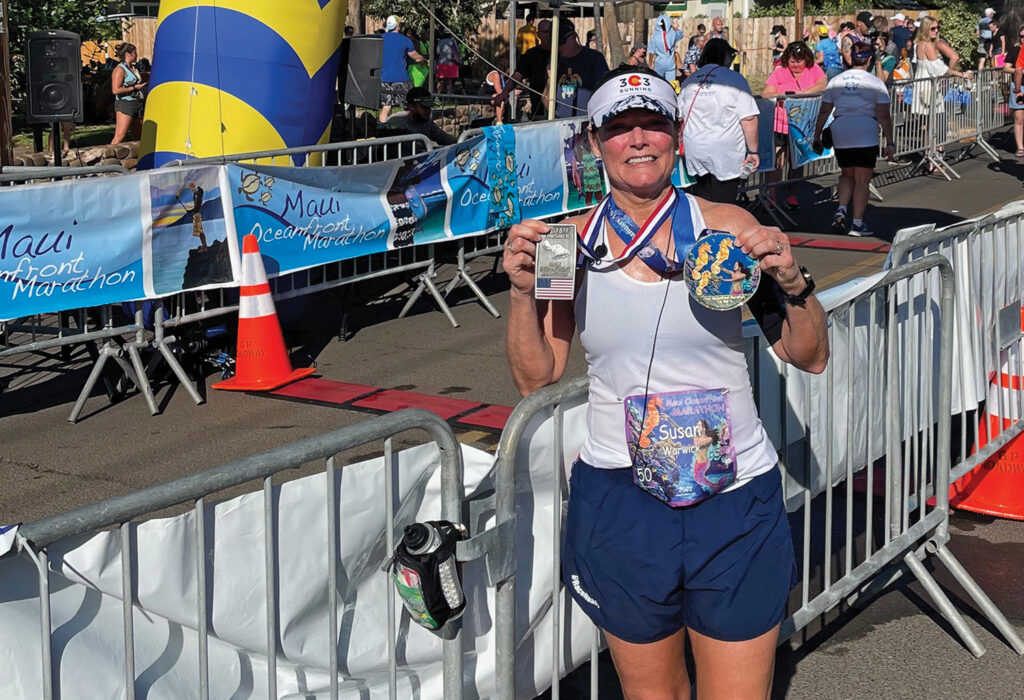 Susan Warwick achieved her goal of running a marathon in all 50 states when she completed the Maui Oceanfront Marathon in January 2022. Courtesy of Susan Warwick

When she began running marathons after accepting a friend’s challenge, 60-year-old Susan Warwick had no idea that her quest to gain fitness and improve health would morph into an epic challenge spanning 22 years, replete with unique perspectives, fabulous discoveries, and lifetime memories.

“Be it national park, national treasure, natural beauty or iconic venue, every state has something to offer,” says Warwick.

Warwick has run 52 marathons, racing in all 50 states plus Washington, D.C., and Paris.

Her first marathon, the Marine Corps race in D.C., was both exciting and humbling.

“Running through D.C., with its history and monuments, was inspiring; I get goose bumps just thinking about that race,” she says.

Next came Kiawah Island, South Carolina, where Warwick qualified for the prestigious Boston Marathon. Boston, with its history, legendary spectator support, iconic course, and participant camaraderie was among her favorites.

“After 15 marathons, I realized I hadn’t repeated any state. I knew others had goals to run marathons in every state, but only after I discovered the Fifty States Marathon Club, which certifies results and awards trophies to runners who complete the feat, did I seriously contemplate the possibility for myself,” says Warwick.

She contemplated, then planned, trained and executed. Her most treasured memories involve her husband, Steve, and other family members, who served as “support crew” through the years. “Steve got tired of hearing me constantly talk of marathons, but he enjoyed the travel, and started training himself,” she says.

He has completed five marathons, running his fifth on his 55th birthday in Maryland.

“Big Sur, California, was scenic with entertainment all along. Drums, tuxedo-clad pianists, and, oh, the hills! The shoreline along Highway 1 was figuratively, and literally, breathtaking,” Warwick says. “Bar Harbor, Maine, took place in Acadia National Park, with its rolling hills among colorful fall leaves, and the ocean. I ate so much lobster, I forgot to carbo-load.”

“I told Steve, ‘We aren’t stopping! I know the course; we are going to finish this race,’” she says. “When we heard the clock was still running, we pressed on and reached the finish line.”

“Living at sea level with few hills made for some tough running experiences in mountainous states,” she says. “I looked for downhill marathons, when possible, but that can be tough on the legs. I ran several marathons in rain start to finish. I encountered freezing rain in Little Rock, Nashville, and Jackson, Mississippi. My hottest marathons took place in Hawaii, Phoenix, Dubuque, Iowa, and Deadwood, South Dakota.”

“I was on track to finish my Fifty States Challenge in 2020, with only four states left. Then, everything was canceled,” she says. “They tried rescheduling only to have to cancel repeatedly.”

Finally, Alaska, one of Warwick’s four remaining states, held its marathon in June 2021. She completed it, despite a mid-race rerouting due to a bear on the course that added an entire mile to the already daunting 26.2-mile marathon distance.

Then came the Maui Oceanfront Marathon in Hawaii. “Volcanic eruptions in Tonga triggered tsunami warnings on race day,” she says. “We were told to seek higher ground if we heard warning sirens!”

“Twenty other runners finished their 50ths that day. We all earned special medals for our efforts.”

“Looking back, I’m grateful to my family and friends for understanding the time and resources I needed to train, plan and travel, and for their support. I am also grateful for the simple ability to run,” she says.

Warwick met many other inspiring runners along the way, each with a unique background and unique goals.

“Our one shared goal was to succeed in crossing that finish line,” she says. “It’s a marathon. It’s not supposed to be easy.”

Warwick is eager to pass along the priceless wisdom and insights she gained during her quest to conquer the Fifty States Challenge.

“Celebrate your accomplishments,” she urges other runners. “Realize you can do more than you ever dreamed, even when the going gets tough. Assigning a special person to each mile and dedicating that mile to them, taking time to enjoy the scenery and the ride, and adjusting goals, when necessary, can carry you through the tough spots. There are times when you will question your sanity, but you will finish, and you will soon be looking forward to your next race.”

Runners and other endurance athletes will attest that the most painful moments teach the most valuable lessons. We learn to appreciate what we often take for granted — our families, friends, bodies, health, fitness, the very passage of time itself.

The wisdom we gain when we accept and strive to conquer insurmountable challenges, as Warwick has, cannot be quantified. This wisdom is life’s greatest reward.