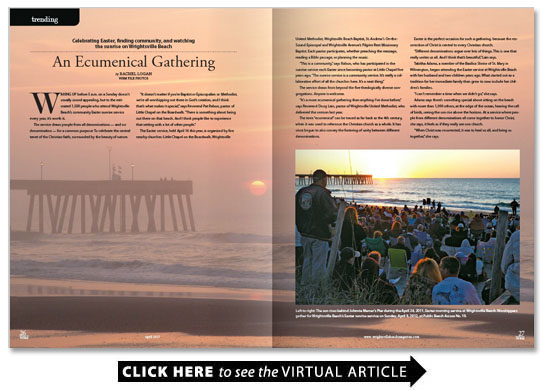 Waking up before 5 a.m. on a Sunday doesn’t usually sound appealing but to the estimated 1 500 people who attend Wrightsville Beach’s community Easter sunrise service every year it’s worth it.

The service draws people from all denominations — and no denomination — for a common purpose: To celebrate the central tenet of the Christian faith surrounded by the beauty of nature.

“It doesn’t matter if you’re Baptist or Episcopalian or Methodist we’re all worshipping out there in God’s creation and I think that’s what makes it special ” says Reverend Pat Rabun pastor of Little Chapel on the Boardwalk. “There is something about being out there on that beach. And I think people like to experience that setting with a lot of other people.”

The service draws from beyond the five theologically diverse congregations. Anyone is welcome.

The term “ecumenical” can be traced as far back as the 4th century when it was used to reference the Christian church as a whole. It has since begun to also convey the fostering of unity between different denominations.

Easter is the perfect occasion for such a gathering because the resurrection of Christ is central to every Christian church.

“Different denominations argue over lots of things. This is one that really unites us all. And I think that’s beautiful ” Lain says.

Tabitha Adams a member of the Basilica Shrine ofSt.Mary in Wilmington began attending the Easter service at Wrightsville Beach with her husband and two children years ago. What started out as a tradition for her immediate family then grew to now include her children’s families.

“I can’t remember a time when we didn’t go ” she says.

Adams says there’s something special about sitting on the beach with more than 1 000 others at the edge of the ocean hearing the call of birds seeing the sun rise above the horizon. At a service where people from different denominations all come together to honor Christ she says it feels as if they really are one church.

“When Christ was resurrected it was to heal us all and bring us together ” she says.

The tradition of celebrating Easter with a sunrise service dates to the biblical accounts of the resurrection of Jesus. The four Gospels in the New Testament — Matthew Mark Luke and John — all mention that it was early Sunday morning when the empty tomb was discovered.

“Christians for years have gathered as the sun comes up because that took place on the very first Easter. Mary Magdalene went to see Jesus just as the sun was coming up ” Lain explains. “Christians have been doing that for hundreds of years around the world. They’ll do it all over our country and all over the world again this year.”

Neither is a sunrise service a new thing at Wrightsville Beach. None of the pastors can say with certainty when it was started but all agree it was decades ago.

Mike Edmonds who has been involved with Wrightsville Beach Baptist Church for more than 40 years says he remembers attending a small Easter sunrise service on the beach in the ’70s.

“When I first attended we were lucky to have 40 people ” he says.

Back then it was simple. Edmonds remembers loading a piano into an old pickup and driving it down on the beach. Now there’s a platform microphones and instruments plugged into a sound system.

Edmonds and other members of Wrightsville Beach Baptist set up the platform at the water’s edge. The pastors face inland so the congregation on their own beach chairs and blankets stretching from both sides of Public Beach Access No. 19 at E. Oxford Street almost to Johnnie Mercer’s Pier can appreciate God’s creation as they look out at the dawn ocean views.

“Aside from maybe a boat on the horizon all you see is something God has made ” Lain says.

This setup also has practical benefits. When the hundreds of voices sing together the sound goes out over the water instead of toward houses filled with sleeping residents and vacationers.

“We haven’t heard any complaints from neighbors ” Rabun says. “But there will not be a single parking space anywhere on the streets.”

With hundreds of people congregated at one section of Wrightsville Beach finding a parking spot can be difficult. Parking begins at Little Chapel. People begin to arrive at 5 a.m. or even earlier. Some walk others bike. Despite the early time no one seems to be grumpy.

“Everyone is in such a good mood. It’s lovely ” Adams says. “When you go [to the beach] in the summer if someone sees a parking spot they take it. The morning of the service people will give you that spot.”

The combination of several simple factors together — the sunrise the beach an Easter service community — creates a meaningful experience.

The Easter service has motivated the beach-area churches to become even more ecumenical. They have started a community beach service the Sunday before Thanksgiving. Some are also coming together to build a Habitat for Humanity house this year. The pastors have regularly scheduled lunches to stay in touch.

“We really like each other and that makes a big difference ” Lain says. “And I think it probably shows when we do a service together.”

Last year’s Easter sunrise service was Lain’s first. Per tradition that says the honor goes to a newcomer to the area he preached the sermon.

“What an honor to be able to bring the word of God to be able to expound on the scripture on such a holy day as Easter to be able to tell people about the glory of the resurrection to so many people all at once ” he says.

This year it’s Wrightsville Beach Baptist Pastor John McIntyre’s turn. Last year’s service was also his first. He recalls standing with the other pastors watching the people pour out onto the beach.

“Watching everybody come I thought ‘Wow this is really really special.’ That’s the neatest thing about Easter how it does bring us together despite our differences ” McIntyre says. “Jesus loves everybody and how can I not if he gave his life for me?”