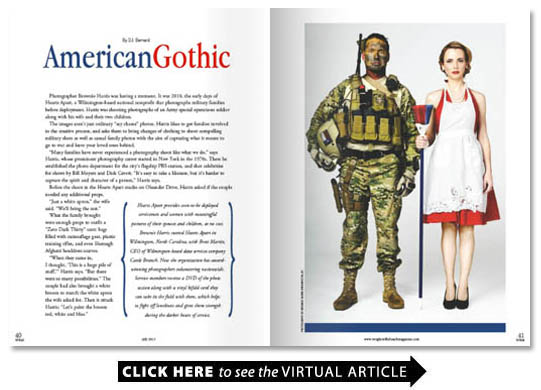 Hearts Apart provides soon-to-be deployed servicemen and women with meaningful pictures of their spouses and children at no cost. Brownie Harris started Hearts Apart in Wilmington North Carolina with Brett Martin CEO of Wilmington-based data services company Castle Branch. Now the organization has award-winning photographers volunteering nationwide. Service members receive a DVD of the photo session along with a vinyl bifold card they can take in the field with them which helps to fight off loneliness and gives them strength during the darker hours of service.

Photographer Brownie Harris was having a moment. It was 2010 the early days of Hearts Apart a Wilmington-based national nonprofit that photographs military families before deployment. Harris was shooting photographs of an Army special operations soldier along with his wife and their two children.

The images arent just ordinary say cheese photos. Harris likes to get families involved in the creative process and asks them to bring changes of clothing to shoot compelling military shots as well as casual family photos with the aim of capturing what it means to go to war and leave your loved ones behind.

Many families have never experienced a photography shoot like what we do says Harris whose prominent photography career started in New York in the 1970s. There he established the photo department for the citys flagship PBS station and shot celebrities for shows by Bill Moyers and Dick Cavett. Its easy to take a likeness but its harder to capture the spirit and character of a person Harris says.

Before the shoot in the Hearts Apart studio on Oleander Drive Harris asked if the couple needed any additional props.

When they came in I thought This is a huge pile of stuff Harris says. But there were so many possibilities. The couple had also brought a white broom to match the white apron the wife asked for. Then it struck Harris: Lets paint the broom red white and blue.

Harris is used to shooting American icons in photographs. In New York he shot John F. Kennedy Jr.s first formal portraits since he was a child in the White House. Hes also taken photographs of US Presidents including Clinton and Carter and a host of American luminaries. Then when he moved to Wilmington 17 years ago he continued his work as a set photographer for Hollywood films and TV shows shot here and as an industrial photographer for major corporations like GE and Raytheon.

Hearts Apart is his way of giving back. What I personally like is the direct good feeling from the families that you know youre giving them something special. And it means so much to all of us he says.

Like Jennifer the Army wife who blew up Harriss photos of her husband into life-sized images and placed them in her childrens bedrooms after her husband Dave was deployed. After her familys photo session Jennifer was overwhelmed by its effect on her family.

Having such amazing photographs of Dave allows our children to go to bed and wake up each day seeing their daddys smile she wrote in an email. A simple thank you seems to barely scratch the surface on how this experience touched our lives.

Hearts Apart is having an even deeper impact with its photographs of newborns for the deployed father who cant experience the birth. One of the first newborn shoots Harris did was for a mother who gave birth on a Friday and came in to be photographed on a Monday.

Shooting a three-day-old baby was something in itself Harris says. But then while shooting the wife Skyped her husband in Afghanistan who hadnt seen the baby yet or any photos.

I held up my LCD viewfinder to the Skype camera so he could see his baby girl says Harris. Then I looked at the Skype screen and he was crying.

Connecting soldiers and their families is why Hearts Apart is so important Harris says. Its something so simple.

Back in the studio Harris was on a roll. At the five-hour mark the shoot had already gone longer than any other he had done. Harris captured poses of the soldier in full camouflage the family in University of Texas outfits and the wife with a rifle with her back to her husband in full gear in a James Bond pose.

The gear reminded Harris that he once came close to going to war himself. In college at the height of the Vietnam War he was registered for the draft.

It was a very scary time he says.

He participated in his share of anti-war protests because more than 58 000 Americans were killed in Vietnam he says. I wish Id had Hearts Apart back then to help the Vietnam Vets they were treated terribly when they came back home.

While the proposition of going to war was raising Harriss consciousness images coming back from Vietnam were raising the consciousness of America as a whole. But the photos Harris creates with Hearts Apart turn the war photography genre around. Instead of bringing the war home they capture a moment at home with loved ones to keep the warrior solid and grounded while away.

After eight hours of the shoot Brownie Harris and the Hearts Apart crew have sent out for dinner. Little did Harris know the shoot would go on for another two hours. His friend brought back the broom with the bristles painted red and blue and the handle blue leaving the base white. The wife put on the white apron over a red dress with pearls. Next to her stood her soldier in cammo gear with face painted a helmet under his arm and a rifle on his back. She held the broom upside down and suddenly it looked like a pitchfork.

Then in an instant it happened Harris says. He snapped the photo and in his viewfinder was a new version of Grant Woods painting American Gothic. Only in this one the woman holds the symbolic pitchfork standing strong while her husband serves his country with a photo in his pocket to remind him of why all this is worth it.