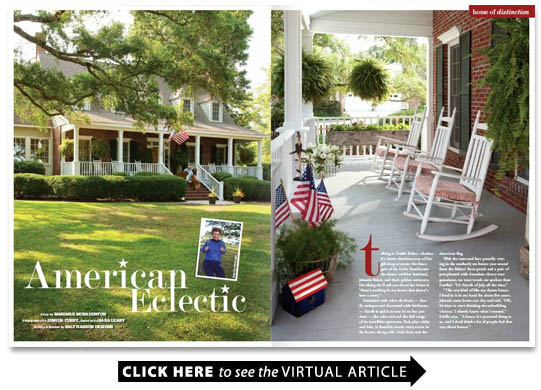 Talking to Estelle Baker whether its inside the showroom of her gift shop or across the fence gate of the Airlie Road home she shares with her husband Johnnie Baker and their golden retrievers first thing shell tell you about her home is “theres nothing in my house that doesnt have a story.”

Furnished with what she loves family antiques and decorated with heirlooms Estelle is quick to zero in on her passions the color red and the full range of its tonal blue spectrum. Red plus white and blue is found in nearly every room in the home along with Uncle Sam and the American flag.

With the stars and bars proudly waving in the southerly sea breeze year-round from the Bakers front porch and a pair of pots planted with American cherry rose geraniums no truer words are spoken than Estelles: “Its Fourth of July all the time.”

“This was kind of like my dream house. I lived in it in my head for about five years. Johnnie came home one day and said OK its time to start thinking about building a house. I already knew what I wanted ” Estelle says. “A house is a personal thing to us and I dont think a lot of people feel that way about homes.”

She attributes that connection to the Mount Olive home place in which she was born in which her mother was born where her mother spent her entire life and where Estelle lived with her grandmother.

“We never moved and I just thought people had houses and lived in them forever ” Estelle says.

With a family history of generations gathered beneath one roof the Baker home is also a home away from home for the couples two adult children and their spouses and the Bakers six grandchildren ages 6 to 17.

Both eastern North Carolina natives Estelle and Johnnie settled permanently in Wrightsville Beach in 1970 moving into a cottage on Greensboro Street where they reared their children Allison and Jay. Johnnie commuted to Charlotte for the next 25 years where he owned and operated an environmental testing lab. When the chance to sell out and move the lab to the coast surfaced the Bakers invested in the waterfront property on Airlie Road where they built a restaurant instead opening the Bridge Tender in 1976. The lab went to Wilmington. The house that anchors the corner of Airlie and Stokely Avenue came along in 1995.

Built by Chris Stone and Robert Montgomery Estelle says she began designing the house in her head at least five years before they broke ground.

“I wanted a dining room; I knew I wanted a living room and they had to be separate. I wanted a symmetrical house a house that looked like it belonged here. It had to have a front porch ” she emphasizes. “That was probably the most important thing. I cannot stand a winky porch ” she says “I have to have a porch big enough to cuss a cat in (without getting fur in your mouth).”

She turned the pages of Southern Living and found a house that Johnnie liked too. It was designed by renowned architect William Poole who had recently moved his offices to Wilmington. The Low Country bungalow was modified by sets of Pooles plans to create a custom style for the Bakers.

“This is the only house we have ever built ” Estelle says. “Weve always taken another house and either renovated or just made do ” she says. “We havent moved that much either.”

The house rests beneath a canopy of large oak tree limbs on a grassy knoll surrounded by a picket fence overlooking a bustling road and the Intracoastal Waterway. The architecture a wide shade porch double-hung plantation-style windows and upper floor dormers frames views of Wrightsvilles sportfishing and pleasure yacht fleet and the drawbridge beyond.

“When I think of my home when I drive down Airlie Road and there it is the thing I want to see on my porch is that flag flying and my husband on the steps with my dogs. Thats what he does every afternoon when he comes home from work. Hes on the porch on the steps sometimes in a chair. The dogs are usually sitting there beside him.”

“And then I also picture my grandchirren running around screaming like banshees. The first Christmas we were actually in the house I said the only thing I really want is a swing in that tree ” she recalls. “Theres no telling how many miles my grandchirren have swung on that tree.”

The Bakers met midway through college with Estelle in summer school at East Carolina University in the early 1960s. Johnnie a former Air Force serviceman was studying at Atlantic Christian in Wilson when he and some buddies traveled to Greenville to meet up with some girls. And though they had been seeing others the night Estelle Flowers laid eyes on Johnnie Baker outside of the Joyner Library kismet intervened.

“Oh my gosh you talk about one fine-looking fella: he had on black pants a black golf shirt and he was smoking a cigarette. He was so nice. We went to the Pure Oil station ” a local hang out where her crowd gathered to drink beer and listen to the juke box. Three nights later Johnnie Baker told Estelle he was going to marry her. Estelle says “I was head over heels and I still am. Weve had our moments but what a ride its been.”

Estelle explains how they came to open a restaurant in a state government surplus facility and save the Crest Movie Theater from demolition or other high profile enterprises. “Weve been given these opportunities ” she says. “We make decisions pretty quickly. I dont think we ever set out to do this ” she describes the spirit of entrepreneurship that has infused their marriage and a shared hard work ethic born from different backgrounds Johnnies from farming with his father Estelles somewhat more urbane experiences working in her fathers general store as an employee of Mount Olives parks and recreation department and later as a pickle counter at the Mount Olive Pickle Factory.

Her family home is located across the railroad tracks from the pickle factory. Her great grandfather settled there because of the transportation the railroad provided.

“He was a nurseryman. He came as a man who grew up on the land. He and his brothers all farmed. He was a big strawberry grower. They all were farmers.”

Estelles father was a local merchant who owned a grocery store J. B. Flowers and Son.

“It was basically a general store back in the day and it was right downtown Mount Olive ” Estelle says.

Today her home is filled with antiques and family heirlooms from the Mount Olive home place the store and more.

“Everything means something to us ” Estelle explains. “Theres no pretense about this house.”

“Were not ready for her to be married yet ” Estelle says.

The invitations and their engraved script underscore Estelles love of the written word the passion that inspired her to first become an English teacher. So enamored of language is she that phrases are written on walls scratched on chalkboards painted on signs or framed under glass. Psalm 118 verse 24 is painted above the windows in the breakfast room. “This is the day that the Lord has made; let us rejoice and be glad in it.”

“I try to live by that. This is where we live here in the kitchen ” Estelle says. “Im in that room all the time. Im in my think place. When Im writing a list of things or I have letters to write I go sit at that table. I have to get a sharp pencil or a pen I like to think with a pencil though.”

Red counters predominate her think room red walls her dining room red upholstery her formal living room even the master bedroom suite is painted red. Only Johnnies man cave above the garage is not red. Estelle calls it the green room.

She is also the steward of her great grandfathers Civil War troop flag.

“I have his Confederate veterans medal basically given after the War Between the States or the Late Great Unpleasantness ” she says.

“Its not about the stuff in the house although the stuff is meaningful to me its the people ” Estelle says. “Its just such a blessing to see your grandchildren grow up. We are very blessed.”

And though it would appear that this lady has everything she loves and dreams of there is one more red thing missing.

“One of my fondest wishes is to own an old red pickup truck ” Estelle smiles.