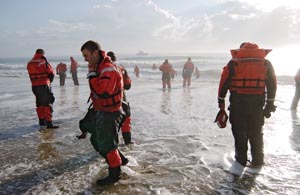 Theres both rhyme and reason to the unpredictable patrols of the United States Coast Guard that emerge from Wrightsville south end on a daily basis and cruise the Intracoastal Waterway from Marker 69 in the north (Surf City) to Marker 163 in the south (Carolina Beach State Park) and off-shore in that vicinity. The commanding officer of the station Special Chief Eric Floyd will often leave the details of such patrols to the Executive Officer in charge. Tasked with maintaining specific areas of responsibility that overlap those of its “sister” stations on Oak Island and Emerald Isle the Wrightsville Beach routes are designed so that potential lawbreakers cant anticipate the schedules. The Wrightsville Beach Coast Guard cruises the Masonboro Inlet one day Motts Channel on another day and hit the New Topsail Inlet on yet another. Theyll get them all eventually.

“At least once a week ” says Floyd ” were hitting our areas of responsibility.”

While always on-call to respond to emergencies of a search and rescue nature much of the stations work revolves around what are called “law enforcement boardings ” which include responses to observed improper boating behavior and routine boardings that determine whether a vessel is adequately equipped with the proper safety gear. In many ways these boardings are as much about education as they are about law enforcement designed to keep boaters aware of safety issues. 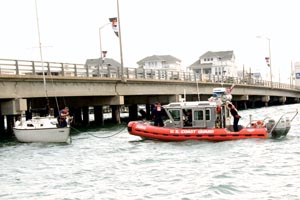 According to Maritime Enforcement Specialist John Porubic the South Wrightsville Beach station performed approximately 400 law enforcement boardings last year and about 75 search and rescue operations. Many of the latter were in response to people out on the water being “overwhelmed by the weather and/or going out beyond the capabilities of their vessel or seamanship.”

“Thats not representative of the number of times we get called out ” says Porubic. “Halfway to the scene well find that a situation has resolved itself before we get there. Not every case is documented so were launching four or five times for every (one that is).”

Thankfully to date very few of the search and rescue missions have been of a dramatic nature. Many in fact border on the mundane.

“Youd be surprised what we get called out for ” says Floyd. “We got called out one time to rescue a dog that had been stranded on an island. We went out there and found the dog alright but we couldnt catch it.”

In the summertime of course the frequency of such “search and rescue” calls increases. College students camping out on Masonboro Island for example will find themselves either incapable of navigating back to the mainland or be the subject of calls made by their parents.

“People will call and ask us to go out and find their kids ” says Floyd. “Well go over there to find three kids and end up evacuating 15 of them.”

When seriously bad weather (a hurricane for instance) approaches the eastern shores of North Carolina one of the first orders of business for the station is evacuating the boats and sometimes the entire station. In danger of sustaining damage from floating or blowing debris in the path of serious weather the boats will be moved through Snows Cut up into the more naturally protected harbor of Wilmington from where the station crew will maintain communication with the Sector Chief. Wrightsville Beach is located within what is known as Atlantic Area Sector 5 embracing North Carolina Virginia Maryland Delaware and portions of New Jersey and Pennsylvania.

With the onset of sustained winds anywhere over 25-30 knots its important as well that the stations boats be south of the Wrightsville Beach bridge.

“If the boats are up north and we get those kinds of sustained winds ” says Floyd “we cant get back because the bridge closes.”

How It All Began

The United States Coast Guard and its continued presence in the area of Wrightsville Beach has its roots in piracy.

The American Revolution had its seeds in what the colonists considered unfair taxation on goods being imported into this country and while John Adams Thomas Jefferson and Benjamin Franklin were vociferously protesting this in Philadelphia citizens along the Atlantic seaboard were taking matters into their own hands boarding ships and just taking the stuff. Once open war with England was declared smuggling became something of a patriotic duty a means to relieve King George of revenue. Piracy became privateering a system whereby private ships were commissioned by government to attack enemy vessels and split the “take” with investors. 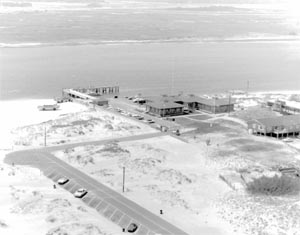 All that changed when the colonies won their fight for independence because one of the ways the founding fathers determined they would generate revenue of their own would be to levy tariffs on imported goods. Smugglers of course had a hard time with the distinction between a tax imposed on them by King George and one sanctioned by some upstart Congress of the United States. In April 1790 the first Treasury Secretary Alexander Hamilton introduced a bill into Congress creating a United States Revenue Marine Service a wildly unpopular bill among smugglers.

Congress approved of the plan in August 1790 and construction of 10 “cutters” began. There was no US Navy at the time so the men aboard these ships were designated as “officers of the customs.” Built for speed strong enough to patrol the coast in all manner of weather conditions and drafting shallow to allow boat chases up inland rivers these 10 cutters were stationed at strategic locations along the Atlantic sea coast. The Virginia cruised out of Norfolk the Active patrolled the Chesapeake Bay the Eagle sailed out of Savannah and the South Carolina was stationed in Charleston. The Diligence out of Wilmington was tasked with patrolling “the sounds and coasts” of North Carolina.

Today the Diligence VI in the Port of Wilmington a 210-foot diesel-powered helicopter-capable cutter accommodating 76 crew members is the only active Coast Guard cutter named after one of the first 10 and ported in its original home.

The other side of “the founding of the Coast Guard” story came about because of life-saving operations directed toward the crew and passengers of shipwrecks. The United States Life-Saving Service was formed after passage of the Newell Act in 1848. It established a series of unmanned life-saving stations along the Eastern seaboard beginning in New Jersey (home to Representative William Newell chief advocate of the legislation). The stations were administered by the Revenue Cutter Service staffed with volunteers like a fire department. It took a few Carolina hurricanes particularly one which occurred in September 1854 to make the United States Life-Saving Service realize that they were ill-equipped and ill-trained.

Congress threw more money at the service allowing for a full-time keeper and two superintendents at each station but it wasnt until 1871 that thanks to a new Treasury Department Chief Sumner Kimball new stations were built and six-man boat crews were assigned to each. Stations cropped up along the rock-bound coasts of Maine Cape Cod Port Aransas Texas and on North Carolinas Outer Banks. Wrightsville Beach was not on that list.

In 1878 the network of stations was formally organized as a separate agency of the US Department of the Treasury and became the United States Life-Saving Service. By the time President Woodrow Wilson signed the “Act to Create the Coast Guard” in 1915 combining the Revenue Cutter Service with its life-saving counterpart there were 270 life-saving stations covering the Atlantic the Pacific the Gulf of Mexico and the Great Lakes. The US Lighthouse Service was added in 1939 and was joined by the US Steamboat Inspection service in 1946. Wrightsville Beach was not on that Coast Guard list of stations either.

According to Virginia Kuhn author of Tide and Times: A History of Wrightsville Beach funds were allocated for a Coast Guard Station Wrightsville Beach prior to World War II but when that war got underway the funds were diverted to support the war effort. It wasnt until 1957 at the request of town aldermen that a station was built on the sound side of the thenTown Hall in the vicinity of the Carolina Yacht Club. There were actually three buildings on that site one housing the fire department one housing the police department and one accommodating the Coast Guard station.

It was almost immediately apparent that a larger facility was necessary but it wasnt until 1969 two years after jurisdiction over the Coast Guard fell to the Department of Transportation that the new station on Water Street was built and dedicated. Originally designed to house a crew of 18 the current station is billeted for 32 and maintains four boats: two 25-foot Response Boats and two 41-foot Utility Boats.

The events of September 11 changed the Coast Guard forever ” says former Executive Petty Officer Mike Hall who was stationed at Wrightsville Beach from 2006-2009. “With the development and implementation of the Homeland Security Department we were immediately transferred to that department and became its lead agency. 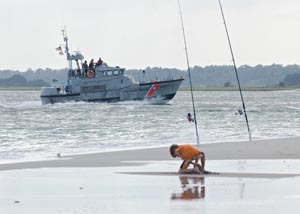 “With that ” Hall adds “came funding that we had never seen before funding that wed been fighting for for years. The first noticeable change was the focus on the ports around the United States. “

According to Hall there wasnt a lot of new terminology involved with this switch. The Coast Guard already had what were known as “Port Security Units” and port security patrols were already in place. What changed or broadened was the focus. The law enforcement aspect of the Coast Guards mission suddenly became as important as the role it played in saving lives.

“Ask someone before 9-11 what the Coast Guard did and the answer would have been: save lives ” says Hall. “After 9-11 the answer became: We protect the shores of the United States and we save lives.”

The station on Wrightsville Beach works very closely with other nearby stations which provide a variety of support services. This support works in both directions as was the case when the nuclear attack submarine USS North Carolina was officially commissioned in the Port of Wilmington. While primary escort and protection services for this submarines trip up the Cape Fear River in May 2008 fell to the Oak Island station station Wrightsville Beachs boats were there to lend a hand. With search and rescue operations air support (fixed wing or helicopter) can be mustered out of Elizabeth City or Charleston South Carolina.

As with most public and private sectors the Coast Guard has been the beneficiary of a quantum leap in the development and uses of improved technology.

“The first that comes to mind ” says Hall “was the advent of global positioning systems (GPS). In 1983 GPS was brand new and something that only the rich and famous could afford. At that time using a satellite to tell you where you were was like something out of The Jetsons.”

Now with GPS well established at stations all over the country as well as “forward-looking infrared” (FLIR) systems which become a vessels night eyes the capabilities of the Coast Guards dual mission of homeland security and saving lives has become much more sophisticated and well coordinated with other agencies.

“There isnt an agency that we dont liaison with ” says Hall “from the Fish and Wildlife services to local fire and police departments. Most government agencies are undersized and its essential that agencies partner up.”