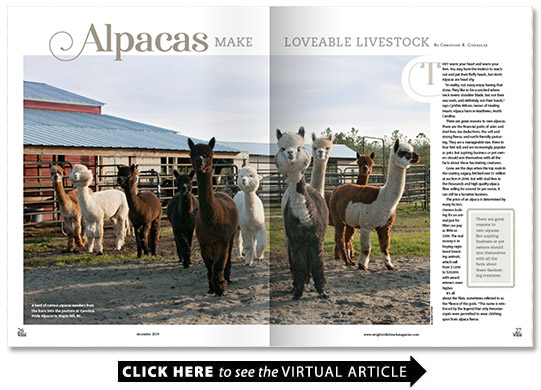 They warm your heart and warm your feet. You may have the instinct to reach out and pat their fluffy heads but don’t. Alpacas are head shy.

“In reality not many enjoy having that done. They like to be scratched where neck meets shoulder blade but not their rear ends and definitely not their heads ” says Cynthia Wilson owner of Healing Hearts Alpaca Farm in Matthews North Carolina.

There are great reasons to own alpacas. There are the financial perks of sales and stud fees tax deductions the soft and strong fleece and earth-friendly pasturing. They are a manageable size three to four feet tall and are increasingly popular as pets. But aspiring business or pet owners should arm themselves with all the facts about these fascinating creatures.

Gone are the days when the top male in the country Legacy fetched over $1 million at auction in 2006. But with stud fees in the thousands and high quality alpaca fiber selling for around $6 per ounce it can still be a lucrative business.

The price of an alpaca is determined by many factors. Owners looking for an animal just for fiber can pay as little as $300. The real money is in buying registered breeding animals which sell from $1 000 to $20 000 with award winners even higher.

It’s all about the fiber sometimes referred to as the “fleece of the gods. ” The name is reinforced by the legend that only Peruvian royals were permitted to wear clothing spun from alpaca fleece.

45 miles northeast of Wilmington. “It is as warm as wool one-third the weight and is moisture wicking. It is a high-end fiber and that makes it more expensive. One of its features is that the fiber is hollow. It keeps moisture away from the body and is popular for hiking socks.”

Sandra Hooper owned two alpaca farms one in southwest Virginia and one in Wilmington with a herd totaling nearly 100. She says U.S. alpaca stock is becoming exceptional. Businessmen hand-selected the best animals from Peru back in the 1980s when laws were lifted allowing the import of alpacas.

Unlike thread count in sheets where the higher the number the better in alpaca fleece the lower the micron count the softer the feel.

“The United States is quite competitive in low-micron count alpaca fleece ” Hooper says. “Although lower micron is desirable the American breeders arebreeding for fleeces that can be processed by American mills for exceptional end products for American buyers.That micron count generally runs 14-16.”

Hooper sells bedding and other products made of alpaca fleece locally through Eclipse and her on-line store. Alpaca fiber has a spring memory it acclimates to body temperature and aids in sleeping she says. The fiber also is being used in high fashion with Chinese buyers acquiring as much yarn as they can.

Alpacas are indigenous to South America and grouped in the camelid family. There are two types of alpacas: the huacaya and the suri whose fleece resembles dreadlocks called pencil locks.

Huacaya make up about 90 percent of alpacas in the world. They look like a fluffy teddy bear with a smushed face differing them from their llama cousins who have elongated muzzles and are much heavier and taller.

Prices on skeins of alpaca yarn vary depending on color and quality.

“I can get $6 per ounce for high quality alpaca fiber that has been hand dyed ” says Char Johnson owner of Happy Tails Alpacas in China Grove North Carolina.”If I’ve got three pounds of quality fleece I can make $288 dollars from one fleece. It does take some time to do that. I have to shear wash we have North Carolina orange clay to get out to make sure there are no beans (fecal balls) stuck to their fleece. There’s a process for dying wash again dry. It is time consuming.”

There can be sticker shock when someone hears the price.

“People will look at the skein and say ‘This is expensive ‘ but I try to lovingly educate them on the process ” Johnson says. “I point out it takes me a year to grow I pay for shearing and milling. Mostly customers get it but the kill shot is this is made here in North Carolina by a woman-owned business. Using the strong ‘shop local’ movement I’m not ashamed to go for that.”

Aside from fiber for spinning and knitting many end products such as socks hats bedding dryer balls fertilizer and felted soaps are becoming popular.

“I found a really good mentor who taught me how to shear and spin yarn ” says Tanya Hiltz owner of Triple H Farms in Lake Waccamaw. “I specialize in unique yarns experimenting with small beaded crystals and artificial flowers or pearls. It’s more tedious but it makes them really unique.”

Alpaca products are hypoallergenic because the fiber contains no lanolin.

“The dryer balls help people with cancer or others who can’t have chemicals against their bodies ” Wilson says. “They draw moisture out of clothes fluff your clothes up and can cut drying time up to 30 percent making them moreearth-friendly.”

A researcher team from Vanderbilt University have an alpaca farm in rural Mercer Tennessee studying the alpaca’s unique antibodies that can potentially be usable as they relate to the enzyme PPP2R5D in treating human patients with a diagnosis of autism Alzheimer’s disease and some cancers.

Alpacas are friendly to the environment. They do not pull grass from the ground they bite the tops. Unlike heavy cattle which can tear up the soil the soft-toed relatively lightweight alpacas (averaging 150-180 pounds) don’t stress the ground.

“They don’t disturb the environment ” Peters says. “They don’t pull vegetation they bite it off more like lawn mowers.They also have a PH-balanced manure. People love it for their gardens. It doesn’t have to be composted.”

Peters’ herd numbers 80; he hopes to package fertilizer in the future. For now he like other farmers will sell the manure by the bucket or whatever container a buyer brings along in a “serve-yourself” manner.

Alpacas can also be friendly to the bottom line. They can be a great tax advantage for investors who buy animals that are boarded and agisted on others’ farms.

The AOAI website is full of helpful information listing tax publications to explore and stating some of the benefits of farm ownership citing expenses that can be deducted or cash sheltered.

“Most importantly you can depreciate your alpacas each year ” Hooper says. “There are alpacas for everyone and their business plan.”

Educate Yourself Before Buying

Most owners stress the need for first-time buyers to do some research before purchasing alpacas. Alpacas need shelter separation by gender special halters and feed yearly shearing toenails trimmed and more. Good sources of information can be found in contacting national and local owner groups.

Alpacas were introduced to the U.S. in the 1980s and the Alpaca Owners Association Inc. (AOAI) list more than 260 000 registered animals throughout the country. There are 5 000 registered with AOAI in North Carolina. The Carolina Alpaca Breeders and Owners association (CABO) which was created to be an educational source and a liaison between farmers and interested buyers lists nearly 40 farms with North Carolina addresses. There are also mini farms who are not affiliated with AOAI or CABO.

Wilson a CABO member says it is always good to have a mentor. One thing she has learned is that the psychology of alpacas is delicate and they ideally need to be with three or more of their own gender to develop a pecking order.

To Pet or Not to Pet

There are differing opinions on having alpacas as pets. Many ranchers love their animals but respect the fact that while they are domesticated to some degree they are still livestock. Each animal is unique. Some like petting and human companions others can become aggressive and go berserk.

“If you ask 10 farmers you will get 20 different answers ” laughs Hiltz the Triple H Farms owner. “They are not like a horse where there is more of a bonding. Each one has its own personality. You see a kid on TV with a solo alpaca and they are best friends (allegedly). People see a cute baby alpaca and owners will get 50 inquiries for a baby but if you are a good farm it is not a good idea to pull a baby alpaca off their mothers to be a pet.”

Hiltz says people should ask themselves what they want in a pet. Alpacas are not going to curl up with you on the couch. They are herd animals and it is not good for them to be left alone or combined with other animals. Some handling conditions can even bring on berserk male syndrome.

“Berserk male syndrome can happen when animals associate too much with humans ” she says. “When they have over-handling in early stages they see humans as equal and it starts as play but it can get rough. I have a friend who was given an aggressive animal but they didn’t tell her that. The alpaca bit a piece of her scalp. It was play biting that turned into a really ugly dominate scene.”

Aggressive behavior is the exception. Alpacas do not typically bite; their teeth are for chewing cud but they do spit when anxious. Alpacas are curious creatures that like cats prefer to approach rather than be approached.

“I have some (alpacas) that are very very sweet ” Hiltz says. “One will come up and want neck rubs and to hang out with me all day.”

Finding the right home and the right business fit is a concern for current alpaca owners. They fear people rushing out to purchase the cute animals before learning how to care for them.