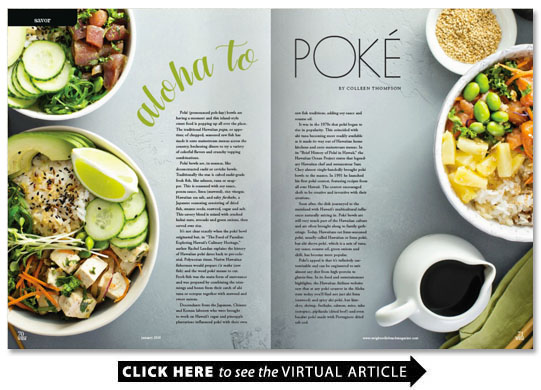 Poke (pronounced poh-kay) bowls are having a moment and this island-style street food is popping up all over the place. The traditional Hawaiian pupu or appetizer of chopped seasoned raw fish has made it onto mainstream menus across the country beckoning diners to try a variety of colorful flavors and crunchy topping combinations.

It’s not clear exactly when the poke bowl originated but in “The Food of Paradise: Exploring Hawaii’s Culinary Heritage ” author Rachel Laudan explains the history of Hawaiian poke dates back to pre-colonial Polynesian times. Native Hawaiian fisherman would preparei’a maka(raw fish) and the word poke means to cut. Fresh fish was the main form of sustenance and was prepared by combining the trimmings and bones from their catch of ahi tuna or octopus together with seaweed and sweet onions.

Descendants from the Japanese Chinese and Korean laborers who were brought to work on Hawaii’s sugar and pineapple plantations influenced poke with their own raw fish traditions adding soy sauce and sesame oil.

It was in the 1970s that poke began to rise in popularity. This coincided with ahi tuna becoming more readily available as it made its way out of Hawaiian home kitchens and onto mainstream menus. In its “Brief History of Poke in Hawaii ” the Hawaiian Ocean Project states that legendary Hawaiian chef and restaurateur Sam Choy almost single-handedly brought poke bowls to the masses. In 1991 he launched his first poke contest featuring recipes from all over Hawaii. The contest encouraged chefs to be creative and inventive with their creations.

Soon after the dish journeyed to the mainland with Hawaii’s multicultural influences naturally mixing in. Poke bowls are still very much part of the Hawaiian culture and are often brought along to family gatherings. Today Hawaiians eat limu-seasoned poke usually called Hawaiian or limu poke but ahi shoyu poke which is a mix of tuna soy sauce sesame oil green onions and chili has become more popular.

Poke’s appeal is that it’s infinitely customizable and can be engineered to suit almost any diet from high-protein to gluten-free. In its food and entertainment highlights the Hawaiian Airlines website says that at any poke counter in the Aloha state today you’ll find not just ahi limu (seaweed) and spicy ahi poke but kimchee shrimp furikake salmon miso tako (octopus) pipikaula (dried beef) and even bacalao poke made with Portuguese dried salt cod.

Making your own poke bowl at home is totally doable. The essentials of a great poke bowl are using the freshest fish you can find and then balancing a variety of flavors and textures. As the history of poke shows there is no one way to assemble poke and you can turn it into what you want it to be.

The great thing about a poke bowl is that you can make it according to your taste. So choose a base you would like whether it’s sticky sushi rice jasmine rice brown rice quinoa farro or even cauliflower rice. The temperature of the rice is always warm and the fish should always be cold. Use a rice cooker to make perfect rice because wet or starchy rice will ruin the poke.

Only use the freshest sushi-grade fish. Tuna and salmon are the traditional options for poke bowls. Cut the fillet lengthwise working against the grain into half-inch strips. Then cut the strips crosswise into half-inch pieces. If you don’t want to use raw fish cooked shrimp works well as does tofu for a meat-free option.

When it comes to your dressing choose carefully as a lot of the flavor of the dish comes from the dressing. Dressings such as soya sauce and ponzu sauce and wasabi and citrus flavors are delicious and complement the fish well.

Fill Up Your Bowl

Now is the time to fill up your bowl with delicious and fresh ingredients. Don’t forget the crunch. Traditionally crushed candlenuts were used but you can use macadamias cashews pickles or wasabi peas. A great poke has contrasting textures flavors and temperatures.

In a medium-sized bowl whisk together soy sauce rice vinegar sesame oil honey ginger crushed red pepper flakes green onions and sesame seeds. Add the tuna and toss. Let the mixture marinate in the fridge for at least 30 minutes or up to 1 hour.