All Gave Some Some Gave All 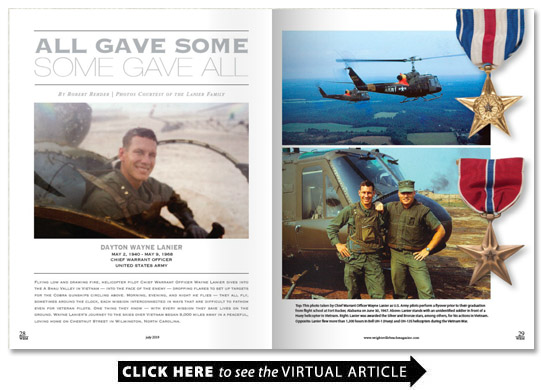 Flying low and drawing fire helicopter pilot Chief Warrant Officer Wayne Lanier dives into the A Shau Valley in Vietnam — into the face of the enemy — dropping flares to set up targets for the Cobra gunships circling above. Morning evening and night he flies — they all fly sometimes around the clock each mission interconnected in ways that are difficult to fathom even for veteran pilots. One thing they know — with every mission they save lives on the ground. Wayne Lanier’s journey to the skies over Vietnam began 9 000 miles away in a peaceful loving home on Chestnut Street in Wilmington North Carolina.

The Vietnam War lasted from Nov. 1 1955 to the fall of Saigon on April 30 1975 — the longest war in American history. In Vietnam Wilmington lost 20 sons — seemingly ordinary men who through raw courage gave their lives under the harshest conditions imaginable. Wayne Lanier was one who gave all even as he saved lives around him.

Some men are engineers at ease in the linear world of azimuths angles and equations. Others are musicians comfortable in the harmony of composing arranging and performing music. One might think those two disciplines would be mutually exclusive — at opposite ends of a spectrum. One is artistic dynamic and free-spirited while the other is empirical geometric and conventional — two quite different mindsets. Wayne Lanier was an exception — a sharp mathematician and a musical virtuoso.

Born in Wilmington on May 2 1940 his early introduction to music began in grade school with a clarinet and piano at his family home in Chestnut Heights three houses from the venerable Chestnut Street School. For Wayne and his older brother Toney it was a happy home filled with flowers and vegetables from the garden of their devoted mom Elma Toney Lanier. The boy’s father Dayton Jay Lanier was a career civil engineer with the Wilmington Corps of Engineers.

Dad Lanier understood the value and discipline of music lessons and so his boys like it or not had a routine each weekday morning before school of 30 minutes practice on the piano and then another 30 minutes on their band instruments. From those early lessons Wayne would go on to play in both the New Hanover High Marching Band and the Dance Band the NC State Marching Band the famous Jetty Jumpers and the popular beach music band The Tassels. By college age he was adept at playing all woodwind instruments and professional on the tenor sax.

Music came easy to the young man as did his classes. He breezed through his assignments and while other students spent hours studying or practicing he had ample free time to collect rare coins and start a remarkable stamp collection. But above all he was fascinated with flying. He spent many hours meticulously building and flying model airplanes. His sleek perfectly balanced planes — Fairchilds Pipers and Cessnas — were works of art built by a prospective young engineer.

Never immune to risk taking early on he demonstrated a competitive nature. Where he learned the rudiments of marble shooting is a mystery but he was a renowned crack shot even in grade school as evidenced by his winnings. His friends of that era said that he would fashion a circle on the playground before school at recess or after class and take on any challengers. The results are literally thousands of multicolored “taws ” “mibs ” “ducks” and “cat-eye” marbles that sparkle and wink from huge glass jars that remain today in his extraordinary collection.

His 1958 New Hanover High School Yearbook “The Wildcat ” stated that he was a member of the Latin Club the NHHS Marching Band ROTC the Sergeants Club the Swimming Team the NHHS Dance Band and the Government Club. An athlete he played Little League baseball in Wilmington was an outstanding swimmer and waterskier and for two years was a lifeguard at Wrightsville Beach.

After graduating from New Hanover High Lanier entered N.C. State University where he studied civil engineering and was a pledge at Sigma Phi Epsilon Fraternity. Local and regional bands provided the music on campus and none was more popular than The Tassels with whom Lanier could be found on weekends playing everything from jazz to beach music on his Selmer saxophone. Fellow band members said he had a fantastic repertoire of popular songs and could walk into a jam session and recognize any lyric any tempo any measure and begin to play never missing a beat.

For three years Lanier studied civil engineering at N.C. State but eventually his music took precedence over college. As the Vietnam War loomed large his draft number was just weeks away so in May of 1966 he joined the Army’s 1st Cavalry Division (Airmobile) the first full U.S. Army division deployed to Vietnam. It was natural that he would be a pilot — and with his math ability and strong sense of mission he would be one of the very best.

fter intense training at three U.S. bases — Fort Polk Louisiana Fort Wolters Texas and Fort Rucker Alabama — he became an officer and pilot. Arriving in Vietnam in August 1967 he joined the 1st Cavalry Division Airmobile in Binh Dinh Province and flew daily missions with the 229th Assault Helicopter Command in the Bell UH-1 known as the “Huey.” The demands on pilots were grueling. Chief Warrant Officer Lanier flew troop transport visual reconnaissance gunship duty and medical transport — often around the clock. Routinely Huey pilots spiraled down into landing zones in tight circles from thousands of feet up to avoid enemy fire. All that stood between a Huey pilot and a small-arms bullet was a thin sheet of aluminum.

In April 1968 the Marine Corps had suffered large casualties at the Khe Sanh Marine Combat Base in northwestern Quang Tri Province. Contributing to those casualties was a 25-mile-long valley known as the A Shau which lies close by Khe Sanh and served as a North Vietnamese supply line running north-south along the Laotian border. U.S. aerial surveillance confirmed that the A Shau Valley contained a massive buildup of Communist troops and war supplies. Often cloaked under heavy clouds and prone to sudden weather changes the steep mountainous terrain offered protection and was used by the North Vietnamese Army (NVA) to launch battles against Khe Sanh and other major U.S positions.

The Army needed experienced pilots to fly observation helicopters into the valley to locate enemy formations and mark them for assault attacks usually by dropping white phosphorous grenades. On May 9 1968 CWO Lanier and his door-gunner Cpl. Chris Frankhauser left their base on a mission into the A Shau Valley to locate NVA positions. It would be their final flight.

The following is the Department of the Army’s battle report with CWO Lanier’s Silver Star Award from that mission:

Department of the Army Award of the Silver Star. Chief Warrant Officer Lanier distinguished himself by exceptionally valorous action while serving as a pilot of an OH-13S helicopter during a reconnaissance mission in the A Shau Valley. While flying ahead of an advancing infantry unit he spotted several enemy bunkers and foxhole positions. Although intense enemy ground fire was directed at his helicopter CWO Lanier remained over the area relaying information about the enemy positions to the ground elements. CWO Lanier continued to fly over the insurgent’s emplacements even after he and his aircraft received direct hits. While relaying vitally needed information to the infantry units CWO Lanier’s helicopter burst into flames and crashed mortally wounding him. CWO Lanier’s gallant action was in keeping with the highest traditions of the military service and reflects great credit upon himself his unit and the United Sates Army.

The Silver Star is the nation’s third highest battlefield honor. CWO Lanier was also awarded the Bronze Star and the Air Medal with 23 Oak Leaf Clusters. He had logged more than 1 300 hours of flight time in Vietnam. There are 2 202 Vietnam helicopter pilots on the Vietnam Veterans Memorial Wall in Washington D.C. Chief Warrant Officer Dayton Wayne Lanier can be found on Panel 57E Line 26.