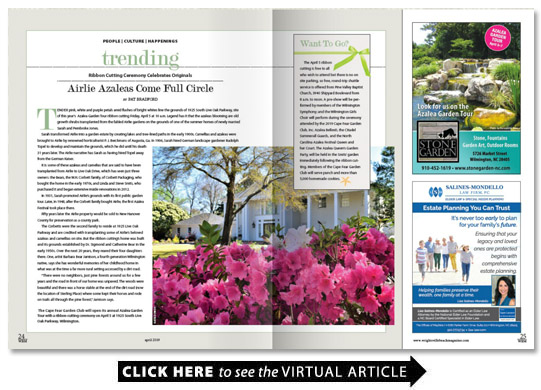 Tender pink white and purple petals amid flashes of bright whites line the grounds of 1925 South Live Oak Parkway site of this year’s Azalea Garden Tour ribbon cutting Friday April 5 at 10 a.m. Legend has it that the azaleas blooming are old growth shrubs transplanted from the fabled Airlie gardens on the grounds of one of the summer homes of newly married Sarah and Pembroke Jones.

Sarah transformed Airlie into a garden estate by creating lakes and tree-lined paths in the early 1900s. Camellias and azaleas were brought to Airlie by renowned horticulturist P. J. Berckmans of Augusta Ga. In 1906 Sarah hired German landscape gardener Rudolph Topel to develop and maintain the grounds which he did until his death 31 years later. The Airlie narrative has Sarah as having hired Topel away from the German Kaiser.

It is some of these azaleas and camelias that are said to have been transplanted from Airlie to Live Oak Drive which has seen just three owners: the Bears the W.H. Corbett family of Corbett Packaging who bought the home in the early 1970s and Linda and Steve Smits who purchased it and began extensive inside renovations in 2012.

In 1931 Sarah promoted Airlie’s grounds with its first public garden tour. Later in 1948 after the Corbett family bought Airlie the first Azalea Festival took place there.

Fifty years later the Airlie property would be sold to New Hanover County for preservation as a county park.

The Corbetts were the second family to reside at 1925 Live Oak Parkway and are credited with transplanting some of Airlie’s beloved azaleas and camellias on site. But the ribbon cutting’s home was built and its grounds established by Dr. Sigmond and Catherine Bear in the early 1950s. Over the next 20 years they reared their four daughters there. One artist Barbara Bear Jamison a fourth generation Wilmington native says she has wonderful memories of her childhood home in what was at the time a far more rural setting accessed by a dirt road.

“There were no neighbors just pine forests around us for a few years and the road in front of our home was unpaved. The woods were beautiful and there was a horse stable at the end of the dirt road (now the location of Sterling Place) where some kept their horses and rode on trails all through the pine forest ” Jamison says.

The April 5 ribbon cutting is free to all who wish to attend but there is no on site parking so free round-trip shuttle service is offered from Pine Valley Baptist Church 3940 Shipyard Boulevard from 8 a.m. to noon. A pre-show will be performed by members of the Wilmington Symphony; and the Wilmington Girls Choir will perform during the ceremony attended by the 2019 Cape Fear Garden Club Inc. Azalea Belles the Citadel Summerall Guards and the North Carolina Azalea Festival Queen and her Court. The Azalea Queen’s Garden Party will be held in the Smits’ garden immediately following the ribbon cutting. Members of the Cape Fear Garden Club will serve punch and more than 5 000 homemade cookies.