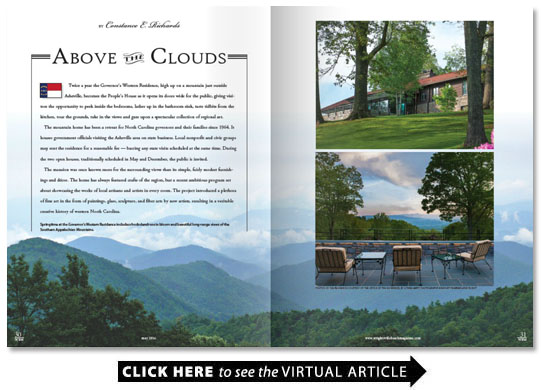 Twice a year the Governor’s Western Residence high up on a mountain just outside Asheville becomes the People’s House as it opens its doors wide for the public giving visitors the opportunity to peek inside the bedrooms lather up in the bathroom sink taste tidbits from the kitchen tour the grounds take in the views and gaze upon a spectacular collection of regional art.

The mountain home has been a retreat for North Carolina governors and their families since 1964. It houses government officials visiting the Asheville area on state business. Local nonprofit and civic groups may rent the residence for a reasonable fee — barring any state visits scheduled at the same time. During the two open houses traditionally scheduled in May and December the public is invited.

The mansion was once known more for the surrounding views than its simple fairly modest furnishings and d�cor. The home has always featured crafts of the region but a recent ambitious program set about showcasing the works of local artisans and artists in every room. The project introduced a plethora of fine art in the form of paintings glass sculpture and fiber arts by new artists resulting in a veritable creative history of western North Carolina.

Good Humor Ice Cream owner and Washington D.C. resident Tom Briner built the 6 000-square-foot split-level part stone part cedar home in 1939. The property changed hands once and was then donated to the state in 1964.

The home and surrounding 18 acres of wooded grounds sit atop Town Mountain at an elevation of 3 140 feet offering spectacular vistas. Views of Mount Pisgah beyond gently curving ridges and the art deco-esque skyline of downtown Asheville are visible in the distance.

The barbecue and grill pavilion was added in the early 1990s during the Jim Hunt administration. Since then many a pig-pickin’ and bluegrass concert has taken place over red-checkered tablecloths in the covered picnic area.

A nonprofit Governor’s Western Residence Association was formed during Hunt’s first administration in 1984 to help support the facility. Many of the acquisitions for the home come through this group — most in the form of gifts and donations.

Updates every few years have brought contemporary touches to the home although it still is somewhat charmingly dated with warm hand-planed birch wood paneling throughout much of the interior. Even down to the window shades donated by a company in Boone the residence showcases (where possible) all that is western North Carolina-made.

During an update for then-Gov. Beverly Perdue original cloth-coated electrical wiring was discovered throughout the house and determined to be a fire hazard says Kaye Myers former chairwoman of the Governor’s Western Residence Association that oversees operations and fund-raising for the home.

“We removed every piece of furniture ” says Myers who also worked at the residence with Gov. Hunt when the picnic pavilion was built and continues to work with the North Carolina Department of Cultural Resources. “We tore out ceilings and walls wiring; it was very much a skeleton. And what stood out is how well built this house was. There are huge timbers inside the walls. That house is not going anywhere.”

On the heels of the rewiring came an ambitious project in 2011 to create a permanent display of artworks from craftsmen and artists of the region throughout the Governor’s Western Residence.

While Cherokee baskets traditional quilts (one by nationally renowned Hendersonville quilter Georgia Bonesteel) pottery charcoal drawings and watercolor landscapes have long been part of the quiet d�cor the overhaul now firmly showcases how much the Asheville area has grown in the area of art. The River Arts District and various artist colonies throughout the county and neighboring towns are well represented truly demonstrating how western North Carolina has become a Mecca of cultural tourism.

From Wendy Whitson’s unmistakable grid-like landscapes to the Kodacolor prisms of Gary Beecham’s glass sculptures the art infuses the residence with the pure hand-hewn essence of the mountains of North Carolina.

The contemporary swooping curves of Weaverville glass artist Michael Hatch’s vessels fill a vitrine with a fresh burst of color. A commanding painting of the rocky French Broad River by Asheville-based Englishman Julyan Davis who has eloquently captured the American South on canvas for decades lends gravitas as do Whitson’s contemporary vertical treescapes that flank a doorway.

Functional andirons and fire tools by David Brewin of John C. Campbell Folk School in Brasstown lend authentic touches. Hand-built tables some with intricate inlay work give a nod to both the art deco and mid-century modern eras.

What once bore more resemblance to a large mountain cabin interior is now fresh airy sleek but still rustic — such is the transformative power of the art.

A 2012 soiree at the home spilling out onto the sweeping granite patio outside celebrated the redecoration of the residence with the artists community leaders and Perdue in attendance.

“It is quite an honor to have my painting in the residence ” says Whitson who attended the celebration. “Although it was accumulated in a few months it looks as if it was thoughtfully collected over a lifetime. It is a true testament to the quality and depth of art and craft available in western North Carolina. Art brings people together. Having work represented here is an extremely high compliment for all artists.”

Special guests have appreciated the residence and the grounds over the years. U.S. Rep. Gabrielle Giffords and her husband Mark Kelly were guests for two weeks in late 2011 as Giffords recovered and received medical treatment following an assassination attempt. During her stay Giffords underwent intensive therapy including language therapy from Western Carolina University professor Nancy Helm-Estabrooks who specializes in communication disorders. The secluded location ensured privacy.

Sometimes the wilderness seclusion encroaches on the guests a bit too much — as in Gov. Pat McCrory’s encounter with a 140-pound black bear on the grounds. In a video the governor can be heard telling his security detail “don’t do anything stupid” as the collared bear — which was being tracked by the Wildlife Resources Commission — sniffed about before ambling off again. On her first visit to Asheville in 2009 Perdue also received a bear welcome.

The next open house for the public takes place on Saturday May 15 from 9:30 a.m. to 1:30 p.m. when the flowers in the grounds should be in full bloom. Although there can still be a chill in the mountains in mid May temperatures should be pleasant for a walk outside to a circular metal sculpture titled “Window on the World” by Stefan “Steebo” Bonitz in the yard that overlooks Asheville below. The sculpture donated by the family-owned business Biltmore Iron and Metal has a plaque that reads “With hopes to inspire all.”

And so do the works of the Governor’s Western Residence inside and out.