BY Emily A. Brown 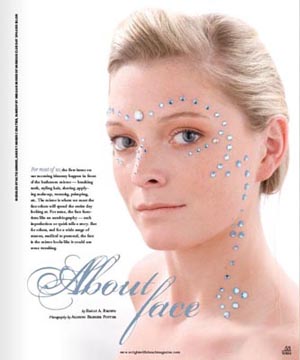 For most of us the first items on our morning itinerary happen in front of the bathroom mirror brushing teeth styling hair shaving applying make-up tweezing primping etc. The mirror is where we meet the face others will spend the entire day looking at. For some the face functions like an autobiography each imperfection or quirk tells a story. But for others and for a wide range of reasons medical to personal the face in the mirror looks like it could use some tweaking.

Fortunately there are options for those who wish to alter their appearance. Help comes in the form of facial plastic surgery and its a lot less intimidating than you might think. Whether the procedure is minimally invasive or part of a drastic reconstruction the skys the limit when it comes to alterations made on our most defining body part.

Plastic surgery on the face falls into two categories: cosmetic or reconstructive. In general cosmetic plastic surgery tends to be non-compulsory its done to alter or improve ones appearance. Some patients want to halt the signs of premature aging while others want to change the size or shape of a facial attribute that has bothered them for a while.

A common catalyst for those who seek surgery is “the desire to look rested refreshed and younger ” says Tor M. Ljung M.D. of Azalea Coast Plastic Surgery. Given the state of todays economy job seekers are acting on those desires in an attempt to obtain the upper hand in a vast pool of applicants. Guy Williams practice administrator for Wilmington Plastic Surgery agrees. “In todays workforce ” Williams says “people want to appear more marketable.” To some hiring teams the laugh lines (or their absence) on your face are as important as the qualifications on your resume. Through surgical and non-surgical facial procedures patients can achieve a refreshed energetic appearance that accurately portrays the effort and enthusiasm they bring to a prospective employer.

Some people undergo facial plastic surgery because its medically necessary. When surgery is performed to improve health and body function or to alleviate illness its referred to as reconstructive. Surgery can fix problems such as birthmarks cleft palates and facial deformities. Other patients are victims of accidents or burns or suffer from diseases. Patients seeking procedures that alter their appearance often receive assistance from their insurance company if the procedure is considered reconstructive.

Ultimately the lines between reconstructive surgery and cosmetic surgery are blurred. “Theyre very intertwined ” says Dr. Ljung. “Were trained in how to do reconstructive [surgery] but its pointless if you cant make it look good.” Often as in the case of removing skin cancers from the head and neck skin grafting is implemented to make the area look normal again. This is just one example of how the two aspects of facial plastic surgery merge.

Before any patient lies down on the operating table doctors ask critical questions to determine if in fact they are appropriate candidates for surgery. Patients are evaluated based on their medical histories (they should be low-risk) mental state (to rule out conflicting psychological issues) motivations and expectations.

Dr. Edward J. Ricciardelli of Summit Cosmetic Surgery stresses how important it is that patients and their doctor are on the same page. In his pre-surgery consultations he strives “to make sure we know exactly what their expectations are. Are they realistic and can I meet those expectations?” Ricciardelli also stresses especially for facial procedures the importance of a healthy skin-care regimen throughout the process noting “If you are operating on bad skin youre going to have bad skin afterwards.” The best candidates for facial plastic surgery regardless of the procedure are ones with healthy skin.

Once its confirmed that a patients decision to alter their appearance is healthy and logical the transformative journey begins. Here are a few of the basic options.

Before exploring the individual parts of the face that can be altered and improved its important to discuss one signature plastic surgery procedure that seeks to make the entire face look younger and more refreshed. Commonly referred to as a “facelift ” a rhytidectomy is a frequently requested procedure that smoothes loose skin on the face and neck while tightening muscles and tissues beneath the skin and removing excess fat.

Like other plastic surgery procedures facelifts aid in reducing the visible signs of aging (wrinkles) and tend to increase self-assurance.

The best candidates for a facelift are patients with skin that has begun to droop but still maintains some elasticity. Patients with jowls and fat deposits under the jaw line often benefit from rhytidectomy. There are several different varieties of facelifts some involving fewer incisions than others. When a patient determines his/her problem areas are limited to the neck doctors may choose to perform a more conservative “necklift” procedure. Doctors will help determine which is best for each patient. Facelifts are often performed in coordination with other procedures like browlifts and eyelid surgery.

A brow lift often called a forehead lift is used to correct drooping in the eyebrow or forehead area. As we grow older the expressions we display via facial muscles a grin or scowl for example can cause horizontal lines and furrows on the forehead. These creases make a person appear angry sad or tired.

To fix this doctors may perform one of two procedures both of which involve work on the muscles and tissue areas that are causing the drooping. Those muscles and tissues are removed or corrected to smooth the skin on the forehead. In one method a surgical incision is made just behind the hairline. In another method an endoscope is used enabling the procedure to be conducted with a minimal number of incisions. The result is often a refreshed youthful appearance with flatter skin on the forehead.

When examined literally the age-old adage “beauty is in the eye of the beholder” is exactly right. Floppy puffy or drooping eyelids and bags that appear above and below eyes caused when fat forces its way through layers of muscle can make a person appear sad haggard and older than they really are.

To correct this surgeons perform a blepharoplasty commonly referred to as eyelid surgery. During the procedure fat and skin are removed from the upper and lower eyelids. Often blepharoplasty is done in conjunction with other procedures like facelifts or browlifts. When the procedure is done to remedy visual defects it may be covered by medical insurance.

Many people consider the nose to be the most defining facial characteristic. Consequently its also the feature with which people have an abundance of concerns. “Its out of proportion with the rest of my face ” is a common complaint. Some noses are misshapen due to injuries; athletes frequently seek out rhinoplasty after suffering sports-related accidents. Other people pursue rhinoplasty to alter naturally occurring humps on the nose or to cure chronic breathing problems.

Rhinoplasty can reduce or increase the overall size of the nose change the shape of the tip or the bridge narrow the width of the nostrils or change the angle between the nose and upper lip. Surgeons may remove add or carve nasal bone tissue and cartilage during the procedure to achieve the patients desired appearance. The end result is an overall visual equilibrium between the nose and other facial features.

The chin is crucial in maintaining a good balance between all facial features. Mentoplasty is the term for surgical enhancement or reduction of chin size. When patients seek to make their chin appear more prominent surgeons can help them decide on a chin implant in a shape and size that is appropriate for the individuals face. Even the smallest chin implants have a large effect on the overall look of the face. A mentoplasty is often performed in conjunction with a rhinoplasty.

Otoplasty    Pinning back of the ears

One physical attribute the ears attract a significant amount of attention when they are too large or protrude. Distortion of the ears can cause high levels of self-consciousness and poor self-esteem. Luckily there are options for patients who are uncomfortable with the size and shape of their ears and we arent talking about a new hairstyle either.

Otoplasty often called the “pinning back of the ears ” can refer to the act of setting ears closer back to the head but can also reshape the ears reduce their size or make them more symmetrical.

A large percentage of the patients who fill plastic surgery waiting rooms are not seeking to go under the knife at all. Those wishing to achieve a rested youthful appearance by less invasive means often seek out injectables and fillers to do the trick. BOTOX Juvederm Restylane and Radiesse are just a few examples of procedures that are performed relatively fast with significantly less downtime than traditional surgery. In addition to fillers many doctors offer their patients facials chemical peels or laser resurfacing. The non-surgical list is long and ever-changing as scientific and medical advancements occur and the demands of our image-driven society change.

Many of the non-surgical procedures are reflections of one important trend doctors are noticing in plastic surgery facial volume restoration. “Were really getting away from the pulling cutting trimming and tightening ” says Dr. Ricciardelli. “We want to create volume full cheeks full areas around the eyebrows and cheekbones. Were trying to achieve natural results trying to actually recreate what has been lost with aging.”

“Thirty years ago everything was about removing fat to look skinnier ” says Dr. Ljung. “Now things have turned 180 degrees. People lean more toward volumizing the face. Think about a babys face or a teenagers face theyre full. To look younger people often want to look fuller. Today its about restoring facial volume.”

Whether youre looking to alter an aspect of your face that has you feeling self-conscious or youre seeking a procedure to make you look younger as you re-enter the workforce the options for a makeover and opportunities for satisfaction are numerous. One final word of caution: Its important to thoroughly research surgeons offices and the surgeries they perform to determine which is optimal for you.