Abandoning Form and Embracing the Abstract 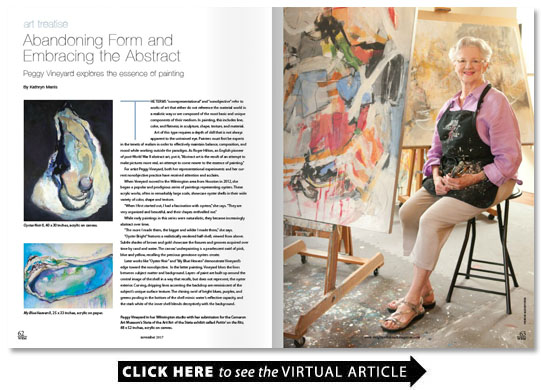 The terms “nonrepresentational” and “nonobjective” refer to works of art that either do not reference the material world in a realistic way or are composed of the most basic and unique components of their medium. In painting this includes line color and flatness; in sculpture shape texture and material.

Art of this type requires a depth of skill that is not always apparent to the untrained eye. Painters must first be experts in the tenets of realism in order to effectively maintain balance composition and mood while working outside the paradigm. As Roger Hilton an English pioneer of post-World War II abstract art put it “Abstract art is the result of an attempt to make pictures more real an attempt to come nearer to the essence of painting.”

For artist Peggy Vineyard both her representational experiments and her current nonobjective practice have received attention and acclaim.

When Vineyard moved to the Wilmington area from Houston in 2012 she began a popular and prodigious series of paintings representing oysters. These acrylic works often in remarkably large scale showcase oyster shells in their wide variety of color shape and texture.

“When I first started out I had a fascination with oysters ” she says. “They are very organized and beautiful and their shapes enthralled me.”

While early paintings in this series were naturalistic they became increasingly abstract over time.

“Oyster Bright” features a realistically rendered half-shell viewed from above. Subtle shades of brown and gold showcase the fissures and grooves acquired over time by sand and water. The canvas’ underpainting is a pearlescent swirl of pink blue and yellow recalling the precious gemstone oysters create.

Later works like “Oyster Noir” and “My Blue Heaven” demonstrate Vineyard’s edge toward the nonobjective. In the latter painting Vineyard blurs the lines between subject matter and background. Layers of paint are built up around the central image of the shell in a way that recalls but does not represent the oyster exterior.Curving dripping lines accenting the backdrop are reminiscent of the subject’s unique surface texture.The shining swirl of bright blues purples and greens pooling in the bottom of the shell mimic water’s reflective capacity and the stark white of the inner shell blends deceptively with the background.

Vineyard likens her creative process to the dance-like battle of the matador.

“I do a lot of mark making first with charcoal and then I will often add water or a wash on top ” she says. “That’s when I start layering with paint. I use long brushes in different sizes so I come up to the paper kind of like a bullfighter. Once I apply the paint I step back to take a look at what I’ve done and then I go back in.”

Vineyard began her career in education teaching at the elementary level. While she credits this work with allowing her room to stretch her artistic wings she was encouraged to pursue teaching in lieu of the studio art degree she wanted.

“I taught elementary art and took additional classes and workshops during the summertime. I was always involved in art making bedspreads clothes anything creative ” she says. “But I never had the luxury of painting anytime I wanted.”

She later worked full time in real estate and raised four children but never forsook her art. Vineyard continued to take workshops and courses carving out precious time for her passion for painting and nonobjective art.

After her move to Wilmington she connected with a small group of unique artists called Diverse Works who are devoted to nonobjective “left of field” art practice.

“When I moved to Wilmington I started out more traditional and got more abstract as I went along ” she says. “The oysters played a big part in my development. Abstract art is abstracting a form — like my flower and oyster paintings. And the next step is to abandon the form altogether; the nonobjective work I’m doing now.”

In abandoning form Vineyard allows emotion thought and feeling to guide composition. In a painting titled “Threads of Life ” Vineyard builds a winding almost chaotic scene out of layers of white gray and black. Connecting this central gray-scaled element to the corners of the canvas are bright hardly wrought lines of green red orange and yellow. The effect is an organized and intellectually arousing tension.

Here Vineyard contemplates time and considers the many threads that compose our experiences — including a personal one that impacted Vineyard and her piece.

“A friend of mine died recently and it was such a shock because it happened so suddenly ” she says. “I realized that my paintings have a lot of threads in them. In life we weave in and out of many threads some joy some disappointment. Friends weave in and out and then the thread breaks.”

Vineyard starts with a feeling thought or inclination but not always a specific or guided purpose. Instead she allows her knowledge of art and composition to give visual form to an often-intangible feeling.

“It takes a lot of concentration and knowledge of the elements of art before you can start working non-objectively ” she says.”I don’t have a preconceived idea. When I start a work I choose color first. I’ll start drawing lines with black — marker or graphite — then I start painting and it goes from there. Sometimes it takes revisiting a piece over and over again. I work on several canvases at a time to make a series; I often start on one and work to the next one and go back and forth.”

Vineyard cites the women of the Abstract Expressionist Movement as inspiring her work. Among the many artists she mentions as influential are Joan Mitchell Helen Frankenthaler and Grace Hartigan.

For most art lovers a reference to Abstract Expressionism calls to mind artists like Jackson Pollock Franz Kline and Willem de Kooning. While the movement became irrevocably connected to a version of masculinity that defined 20th-century U.S. culture many female artists contributed to and advanced the first uniquely American art movement.

The Palm Springs Art Museum referenced this missing history for their exhibition of the groundbreaking artists earlier this year: “As part of a circle of painters known as Abstract Expressionists they helped forge the first fully American modern art movement. Though women actively participated alongside men in the studios clubs and exhibitions textbook accounts of the movement tell the story through the work of a handful of male artists. In fact the image of the paint-splattered heroic male artist has come to characterize the movement as a whole. � Until recently their involvement has been under-reported and their canvases undervalued. Yet their authentic expressions belong front and center in the accounts of abstract expressionism.”

The influence of these female painters is visible in many of Vineyard’s paintings through the contrast between background and foreground line and brushstroke quality and the high color contrast she employs.

In her works like “The Big Chill” and “Begone ” Vineyard reflects the vibrancy of abstract expressionism as the critic Harold Rosenberg described it: “At a certain moment the canvas began to appear to one American painter after another as an arena in which to act — rather than as a space in which to reproduce re-design analyze or ‘express’ an object actual or imagined. What was to go on the canvas was not a picture but an event.”

In “Begone ” a 30 x 30-inch work of acrylic on canvas Vineyard draws attention to the stroke of brush on the surface. By employing only variations of white gray and black and a single shade of shockingly vibrant red the artist calls attention to the flatness of the canvas and creates movement and contrast through large swaths of color and a subtle layering of paint.

In “The Big Chill ” Vineyard utilizes a complex system of mark-making washes layering and paint removal.She combines this variety of brushstroke and paint quality with a high-contrast color palette of icy purples and blues and brilliant shocks of bright red and orange.This dramatic technical style both calls attention to the flatness of the canvas and encourages the viewer to engage emotionally with the piece.

One of Vineyard’s strengths is her ability to embrace the unexpected and adapt to accidents during the creative process. By embracing the medium as the defining characteristic of their work abstract expressionist painters are known for their creativity and flexibility and for their devotion to process over product.

“I like the happy mistakes ” she says. “Once when I was painting I had a big jar of white gesso in my hand; it fell on the floor and shot up onto the painting I’d been working on. I couldn’t believe it had happened but I thought I’d try to make something out of it. I never take it too seriously because you can always paint over it. There are a lot of mistakes and deletions in painting so if you make a mistake just paint over it!”