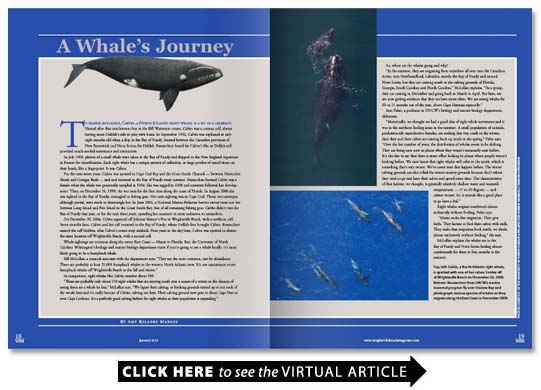 To marine biologists Calvin a North Atlantic right whale is a bit of a celebrity. Named after that mischievous boy in the Bill Watterson comic Calvin was a curious calf always leaving mom Delilahs side to play with boats. In September 1992 Calvin was orphaned at only eight months old when a ship in the Bay of Fundy located between the Canadian provinces of New Brunswick and Nova Scotia hit Delilah. Researchers feared for Calvins life as Delilah still provided much-needed sustenance and instruction.

In July 1993 photos of a small whale were taken in the Bay of Fundy and shipped to the New England Aquarium in Boston for identification. Each right whale has a unique pattern of callosities or large patches of raised tissue on their heads like a fingerprint. It was Calvin.

For the next seven years Calvin was spotted in Cape Cod Bay and the Great South Channel — between Nantucket Shoals and Georges Bank — and returned to the Bay of Fundy every summer. Researchers learned Calvin was a female when the whale was genetically sampled in 1994. She was tagged in 1998 and scientists followed her development. Then on December 31 1999 she was seen for the first time along the coast of Florida. In August 2000 she was sighted in the Bay of Fundy entangled in fishing gear. Her next sighting was in Cape Cod. There two attempts although partial were made to disentangle her. In June 2001 a National Marine Fisheries Service survey team saw her between Long Island and Fire Island in the Great South Bay free of all remaining fishing gear. Calvin didnt visit the Bay of Fundy that year or for the next three years spending her summers in areas unknown to researchers.

Whale sightings are common along the entire East Coast — Maine to Florida. But the University of North Carolina Wilmingtons biology and marine biology department states if youre going to see a whale locally its most likely going to be a humpback whale.

Bill McLellan a research associate with the department says They are the most common just by abundance. There are probably at least 25 000 humpback whales in the western North Atlantic now. Its not uncommon to see humpback whales off Wrightsville Beach in the fall and winter.

There are probably only about 150 right whales that are moving south over a course of a winter so the chances of seeing them are a whole lot less McLellan says. We figure their calving or birthing grounds extend up to our neck of the woods here and its really because of Calvin calving out here. Their calving ground now goes to about Cape Fear or even Cape Lookout. Its a perfectly good calving habitat for right whales as their population is expanding.

So where are the whales going and why?

In the summer they are migrating from anywhere all over into the Canadian Arctic into Newfoundland Labrador mostly the Bay of Fundy and around Nova Scotia but they are coming south to the calving grounds of Florida Georgia South Carolina and North Carolina McLellan explains. As a group they are coming in December and going back in March to April. But here we are now getting evidence that they are here more often. We are seeing whales for 10 or 11 months out of the year above Cape Hatteras especially.

Historically we thought we had a good idea of right whale movement and it was in the northern feeding areas in the summer. A small population of animals predominately reproductive females are making that trip south in the winter then they and their calves are coming back up north in the spring Pabst says. Over the last number of years the distribution of whales seems to be shifting. They are being seen now in places where they werent necessarily seen before. Its also fair to say that there is more effort looking in places where people werent looking before. We now know that right whales will calve in the north which is something thats very recent. Weve never seen that happen before. The winter calving grounds are also called the winter nursery grounds because thats where they tend to go and have their calves and spend some time. The characteristics of that habitat we thought is generally relatively shallow water and warmish temperatures — 17 to 20 degrees — and calmer waters. So it sounds like a good place to go have a kid.

Moms make this migration. They give birth. They lactate or feed their calves with milk. They make that migration back north we think almost exclusively without feeding she says.

McLellan explains the whales are in the Bay of Fundy and Nova Scotia feeding almost continuously for three to four months in the summer.

So they are feeding night and day and putting on that layer of blubber or internal fat he says. A female will come south and most likely will not feed from the time she leaves. It could be as much as up to six months. And even be lactating at this time too.

Females reproduce about every three years. Whales gestate for 12 – 13 months and have one calf. The calf is approximately 16-18 feet long and weighs around 1 500 pounds. After the mother and her calf migrate back north and they rest for one year feeding and rebuilding those stores. Female sexual maturity is variable.

The youngest returning females are about six or seven years old. It can be older than that Pabst says.

Erin Cummings and Ryan McAlarney are aerial observers for UNCWs marine mammal program. They have seen 23 different species of cetaceans on the East Coast.

Thats a huge percentage of the worlds species Pabst says.

Pabst McLellan Cummings and McAlarney say December through the spring is a good time to look. Locally right whales have been sighted from the area around the aquarium at Fort Fisher. From land McLellan says We see them at the state park just above the aquarium. Go across the dune crossing and its not uncommon to see humpbacks blowing five or six miles offshore.

UNCW researchers indicate North Carolina has the highest species diversity of marine mammals of any state along the East Coast.

We see a third of the whales of the world in North Carolina McLellan explains.

Cummings says We get to see animals that other people may never ever see. Thats pretty exciting.

The historical and cultural influences of whaling practices in North Carolina from the colonial period to the turn of the 20th century is the focus of Ryan Bradleys thesis. Bradley a masters candidate in the maritime studies department at East Carolina University is investigating the archeology as well as attempting to catalog artifacts and record stories related to North Carolinas whaling history by meeting with descendants of whalers for his thesis project.

He has hosted a series of talks in Corolla Cape Hatteras Manteo and Beaufort during which Outer Bankers and Core Sounders shared their stories and showed off their artifacts.

I lived in Nantucket and visited fabulous museums like Mystic Seaport. After moving to North Carolina for graduate school I was shocked to find out that North Carolina had a similar whaling culture but no one had done a lot of research about it he says.

Bradley found the area north of Shackleford Banks was a prime location for whaling activities. A license issued in 1666 is the first historical record of whaling on North Carolina shores but that was an enticement for New Englanders to come south.

The Outer Bankers didnt keep records Bradley says. We know they began whaling sometime before the Revolution.  Some whalers may have made their home in the Banks to whale fish and farm he explains. They could farm and fish most of the year and then hunted in January when whales were migrating north.

Whaling was one of the few industries in which Outer Bankers could make money. Typically crops and fish were traded but fishermen hunted whales for cash. According to W.C. Kerr a geologist and visitor to the Outer Banks in 1875 the oil and bone from a single right whale sold between $1 200 to $1 500. Whaling also became family tradition. Mothers and children helped cut up the whales and boil the blubber.

Whaling elsewhere in the country was a company run business. But in North Carolina we dont have evidence that its funded by anyone else than themselves Bradley elaborates.

Whaling off the Outer Banks dried up around 1917 when whale oil was replaced by petroleum.