A View To Remember 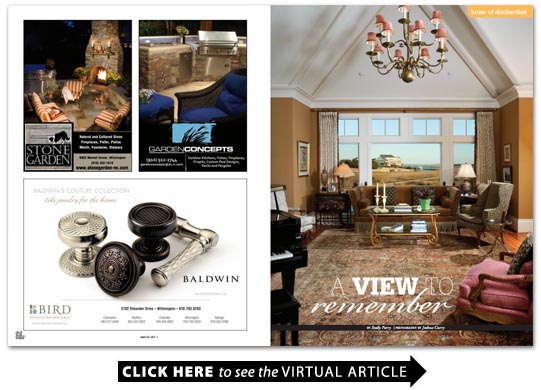 Anne and Dennis Sorhagen bought their house off Old Military Cuttoff Road in 2001.

“It was originally purchased as a pre-retirement second home ” Anne says. “The original house was very informal and beachy. Our home in New Jersey was a classic traditional and we had treasured pieces of furniture that would not fit in the original house.”

Although the Sorhagens looked at other homes they were unable to find one that matched the outstanding Guinea Lane location and views. “So renovation was the answer ” Anne says.

The heart of the house is the kitchen where as Anne says all the important things happen. With the table as the centerpiece the stage is set for a comfortable atmosphere while entertaining. Annes authentic “kitchen table” is a refreshing shift from the standard island. The sturdy surface made of seasoned wood from a Kentucky distillery adds to the organic feel of the room.

A small vestibule separates the kitchen from the hallway accentuating the kitchen. Architect Michael Kersting says “We wanted the kitchen to stand alone so here as well as throughout the house we thickened the thresholds as a way to create more permanence.” Heavy moldings and 12-inch baseboards add to the stability framing the pale green walls that complement the natural palette of color found throughout the kitchen.

Glazed wood cabinets reach toward the 10-foot ceilings and display a variety of earthy pewter accents that tie the room together including a 1910 platter from a Newport Rhode Island beach club and pewter Juliska stonewear on the table.

Functionality is a major characteristic of the kitchen and the appliances help get the job done with two Bosch dishwashers two garbage disposals a GE trash compactor Sub-Zero refrigerator and a microwave above an appliance garage that hides the toaster. A pantry to the side holds extra cooking utensils easy to grab when whipping up meals.

An exposed structural beam delineates the dining area from the food preparation area. This is where Kersting brought in an exterior porch by removing the wall and expanded the kitchens footprint and is also where the kitchen opens to an elevated open deck truly an extension of the kitchen with a custom-made stainless steel grill. Overlooking the marshes the deck drifts toward the living room and interior connecting corridors which link the foyer to the dining room looping back around to the kitchen.

“The Sorhagens knew they wanted fairly significant renovations ” Kersting says adding that Anne wanted the classic shingle-style home with a formal interior. “Once we came to understand the direction things were going we needed more space.”

So instead of adding on to the existing two-story structure Kersting created an entirely separate one-story addition and merged the two with a bridge. “It created an interesting space which became an internal courtyard ” Kersting says. “This also helped preserve the views from the kitchen.”

Jim Farlow of The Farlow Group was the Sorhagens building contractor for the project.

“I really like this house ” Farlow says adding that he was impressed by the creativity that went into merging the new structure with the original. “They really were able to capitalize on the outdoor space and the views.”

Anne says that her decision to hire Farlow was a simple one after she visited one of his work sites and found it impeccably clean. Kersting was also an easy choice for the Sorhagens who interviewed several architects before making their final selection.

“We found that Michael in our opinion was the only architect that designed homes with something new fresh and interesting in mind ” Anne says. “He approached our project first by asking about our lifestyle and our furniture. He wanted to match our home to our lifestyle.”

Entertaining plays a large role in the Sorhagens lives both privately and for the various nonprofits they support so Kersting strove to create a design that would allow plenty of room to entertain guests yet remain comfortable for the couple on a day-to-day basis.

Although Anne is partial to entertaining around the kitchen table the dining room offers a picture-sized window that frames a view of the meticulously manicured landscape.

Just off the kitchen a dry bar an old entertainment center restored and electrified by Curtis Martin makes for an easy transition into the rest of the house with a wet bar right around the corner. Honed granite countertops and a hammered copper sink sit atop a mini-fridge and wine cooler creating an ad hoc butlers pantry within easy reach during gatherings.

The foyer holds an antique Chinese altar table and a rare antique map of Captain Cooks last voyage in 1784 framed in Koa wood. Inside the entertainment room the space opens up with impressive views of the marshes. Seventeen-foot ceilings provide an acoustic haven for an impromptu concert on the couples grand piano. A gorgeous Knoll-designed sofa by Edward Ferrell Ltd. sits in front of the large window.

“I love the living room the way its separated ” Farlow says. “They really maximized the views with the wall-to-wall windows.” Artwork accompanies the gorgeous views with paintings throughout the home from local artists some of whom are close friends of the couple.

Down the hall is the scullery which traditionally borders the kitchen and lends itself to food prep though Kersting and Anne had a different take on it.

“In this case it has evolved into a side area for laundry and a work space and small office ” Kersting says. “Its kind of a catch-all for the house.” The Archer Read cabinetry is painted French white matching the trim throughout the house and is framed by slate gray walls. Floors tiled in twelve-inch black-and-white squares are effortlessly chic in the room that Anne calls her “own space.”

“Because I am involved in the community and a partner in a business I needed a full-fledged office with the flexibility of taking care of household tasks at the same time ” she says. “Our kitchen is the scene of socializing and lots of conversing not a place where matters with a confidentiality component could be discussed.”

Next to the scullery the powder room is a vivid continuation of the classic black and white colors with patterned wallpaper from Stroheim & Romann. Around the corner is one of the only sections of the Sorhagen home that could not be renovated: the staircase and elevator.

“In my opinion the stairwell is quite ordinary ” Anne says. “I had to come up with a way to make it special.” After traveling to Charleston to visit her son in college Anne spent some time studying iron balustrades. When she returned she called on her friends son Ben Kastner who had just started Intracoastal Iron Works with business partner Richard Coley. “I asked him to replicate the iron work on the Exchange Building on East Bay Street (in Charleston). He did an amazing job.”

Upstairs the master bedroom opens up with a series of windows showcasing the waterside view.

“The master bedroom had smaller windows in the original house but we really wanted to open up what is the best view in the house ” Kersting says. “With this room we had to rearrange the roofs structure. That opened the room up and really created a space to hang out including a sitting area and sleeping area.” A hand-painted dressing screen from New York Citys Orient Collection of Decorative Crafts covers the wall next to a collection of antique furniture and an E.J. Victor writing desk. Custom-drapery and bed skirts complete the look. Although Anne had the input of friends and family she selected everything herself.

Next to the master what was once the fifth bedroom of the house is now an exquisite closet with the adjoining master bath that according to Kersting was an obvious choice. “Traditionally bathing and dressing go hand in hand ” he says “so it made a lot of sense that they should be together. And because the space was available we created a true dressing room with plenty of natural light.”

The luxurious closet designed by Sue VanNote of Closets and Things is rich mahogany with mirrored double doors and features pull-out shelves hat and shoe racks and folding drawers.

Passing through the closet and into the master bath Emperador brown polished-granite countertops surround the room. The bathroom follows Kerstings stand-alone design and features a vanity and tub and around the corner a vast walk-in shower.

“These are utilitarian spaces ” Kersting says explaining the bathrooms layout. “I wanted to take a traditionally shaped room and insert other individual components that fulfill traditional needs. The wall inserted in the center of that space helps screen the gracious shower.”

Down the hall a guest room known as the pine room because of its expansive view of the neighboring pine trees offers a comfortable home away from home for guests.

On the third level is Annes sons room. Making the most of this smaller area the cozy room features a built-in chest of drawers and a desk that folds into the wall.

“We wanted to maximize the space ” Farlow says “so we bumped out a little hole here and there.”

Two floating nightstands flank either side of the bed with a small bathroom located across the room. Against the far wall a deck brings in plenty of natural light creating the illusion of even more space offering yet another stunning view of the Atlantic from the Sorhagens spectacular home.