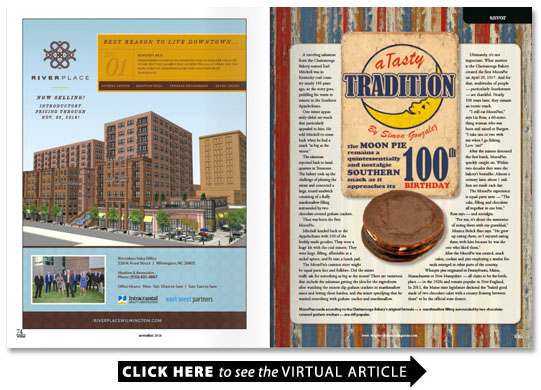 A traveling salesman from the Chattanooga Bakery named Earl Mitchell was in Kentucky coal country nearly 100 years ago so the story goes peddling his wares to miners in the Southern Appalachians.

One miner apparently didn’t see much that particularly appealed to him. He told Mitchell to come back when he had a snack “as big as the moon.”

The salesman reported back to headquarters in Tennessee. The bakery took up the challenge of pleasing the miner and concocted a large round sandwich consisting of a fluffy marshmallow filling surrounded by two chocolate-covered graham crackers.

Thus was born the first MoonPie.

Mitchell headed back to the Appalachians with 100 of the freshly made goodies. They were a huge hit with the coal miners. They were large filling affordable at a nickel apiece and fit into a lunch pail.

The MoonPie’s creation story might be equal parts fact and folklore. Did the miner really ask for something as big as the moon? There are variations that include the salesman getting the idea for the ingredients after watching the miners dip graham crackers in marshmallow sauce and letting them harden and the miner specifying that he wanted something with graham cracker and marshmallow.

Ultimately it’s not important. What matters is the Chattanooga Bakery created the first MoonPie on April 29 1917. And for that multitudes of people — particularly Southerners — are thankful. Nearly 100 years later they remain an iconic snack.

“I still eat MoonPies ” says Liz Ross a 60-something woman who was born and raised in Burgaw. “I take one or two with me when I go fishing. Love ’em!”

After the miners devoured the first batch MoonPies quickly caught on. Within two decades they were the bakery’s bestseller. Almost a century later about 1 million are made each day.

The MoonPie experience is equal parts taste — “The cake filling and chocolate all together in one bite ” Ross says — and nostalgia.

After the MoonPie was created snack cakes cookies and pies employing a similar formula emerged in other parts of the country.

Whoopie pies originated in Pennsylvania Maine Massachusetts or New Hampshire — all claim to be the birthplace — in the 1920s and remain popular in New England. In 2011 the Maine state legislature declared the “baked good made of two chocolate cakes with a creamy frosting between them” to be the official state dessert.

“It’s probably one of the first things I ever started cooking ” says Blake who is from Boston. “I started watching my grandmother make them around the holidays during the Christmas season. She called them black moons. It’s a variation of the MoonPie that most people know. When I make them many people think they’re going to have the traditional MoonPie. And then they try it and it’s different. This is maybe a New England take on it. They are one of the most chocolatey cakes I’ve ever had. The cookie part is very much like a dense chocolate cake.”

Like the traditional MoonPie Blake’s black moons have a comfort food/nostalgia vibe.

“One of the things I miss is my grandmother’s cooking ” he says. “When I bite into one it’s like I’m in grandmother’s kitchen all over again.”

Scooter pies also originated in the Northeast. Burry’s a bakery in Elizabeth New Jersey copied the MoonPie formula sandwiching a marshmallow filling between two round chocolate-covered graham crackers. They also have their own folklore. Some claim they were named after popular New York Yankees’ shortstop Phil “Scooter” Rizzuto.

Burry’s one of the original bakers of Girl Scout Cookies went out of business so there are no more official Scooter pies — or confirmation of the name origin — but variations still can be found.

Little Debbie Marshmallow Pies made in Collegedale Tennessee just down the road from Chattanooga are another adaptation of the chocolate-coated-cookie-surrounding-marshmallow-filling theme.

But for many there is no substitute for the original MoonPie.

“My grandma Vivian Bradshaw used to keep a secret stash of MoonPies and would slip us one when our parents weren’t around ” says Sunna Brown who grew up in Pender County and now lives in Illinois. “She would wink at us and say ‘Now enjoy but be sure to eat your supper.’ I sure do miss her. I still eat them today. I even got my ‘Yankee’ husband hooked on them!”

Beth Williamson Mills a teacher at Rocky Point Elementary has a creative use for them.

“I use the vanilla ones with my classes when we are studying phases of the moon ” she says. “We use chocolate icing to cover up the MoonPie to show the various stages.”

For most it’s all about the experience of eating.

“We zap them — the chocolate ones — in the microwave and it puffs up 10 times its normal size ” Heather Ruddell says. “The chocolate melts.”

Old-timers know the proper way to wash down a MoonPie is with an RC Cola the Georgia-born soft drink.

The practice of pairing the snack with the soda began sometime in the 1930s. It’s uncertain why the MoonPie and Royal Crown Cola became an item but a popular theory holds that each was the biggest item of its kind available for a nickel — the soda came in a 10-ounce bottle — and together they provided the most bang for the dime. Together an RC and a MoonPie became known as the working man’s lunch.

Big Bill Lister Hank Williams’ opening act and rhythm guitarist immortalized the pairing in 1951 with a song called “RC Cola and a MoonPie”:

“I may be just a country boy but brother I get my thrill with an RC Cola and a MoonPie and playin’ Maple on the hill.”

With or without an RC Cola MoonPies were a popular pick-me-up particularly for rural working people.

“When I was young I handed tobacco during the summer for a large farmer in Sanford ” says Charlotte Baggett who’s now in her 70s. “For our break he served us MoonPies Pepsi and peanuts.”

Back then there was only one flavor and size available. During the ’60s and ’70s vanilla and banana were added and for those with a big appetite the supersized double-decker deluxe. Today there’s also strawberry and a trendy salted caramel version. Calorie-conscious consumers can opt for minis.

Over the years MoonPies have attracted almost a cult following.

The streets of tiny Bell Buckle Tennessee (population 500) swell on the third Saturday in June for the RC-MoonPie Festival. The annual celebration of “the South’s original fast-food” includes a parade music cloggers and a MoonPie-eating competition.

There’s also an annual eating contest as part of the Harvest and Hornworm Festival at Duke Homestead in Durham in September. Whoever consumes (and keeps down)fiveMoonPies first wins.

Tuscaloosa County Alabama claims to be home to the oldest such competition inaugurated when a local WalMart had a surplus of the confections. It’s become the biggest attraction for the Labor Day celebration at Tannehill Ironworks State Park drawing some 3 000 people.

Alabama seems particularly crazy about the big round snack. On December 31 in New York City they drop a large lighted ball to bring in the New Year. In Mobile they drop a MoonPie. Specifically a 12-foot 600-pound replica drops down the side of a 34-story downtown skyscraper to the delight of about 50 000 revelers.

A couple of hours before the ball — um pie — drops there’s the ceremonial cutting of the world’s largest MoonPie cooked up for the occasion by the Chattanooga Bakery.

It’s no wonder that Mobile which claims to be the largest per-capita purchaser of MoonPies will be the home for the company’s fifth general store. There are also three in Tennessee and one in Charleston South Carolina selling themed memorabilia like T-shirts hats onesies scarfs mugs glasses magnets clocks lip balm Christmas ornaments and the redneck six-pack — two RC Colas and four MoonPies. There’s even a MoonPie milkshake.

The quintessential downhome snack has been combined with a couple of other Southern traditions: whiskey and NASCAR. There is an official MoonPie moonshine and Bristol Motor Speedway in Tennessee serves a burger that combines two beef patties with graham crackers marshmallow and chocolate.

While MoonPies are primarily a Southern thing folks in other parts of the country know a good thing when they taste it. A BuzzFeed video shows Californians trying one for the first time. They naturally fall into the proper etiquette of how to eat a MoonPie with the cellophane still wrapped around it. You have to catch the crumbs somehow. It’s polite.

One young lady sums up the feelings of generations of MoonPie fans. “Is this the best thing I’ve ever eaten? No. But if you tried to take it away from me I would kill you.”

Drop batter in 1-Tbspn portions onto an ungreased cookie sheet spacing them at least 2 inches apart. Bake for 7-8 minutes or until cakes are baked completely. To make larger ones as shown on right use 2 Tbspns of batter.

Blend all ingredients until fully mixed and refrigerate until firm. (Filling is best when made the day before.)

Spread filling on the bottom of one cookie cake and top with a second to make a cookie sandwich. Enjoy with cold milk.