A Study in White 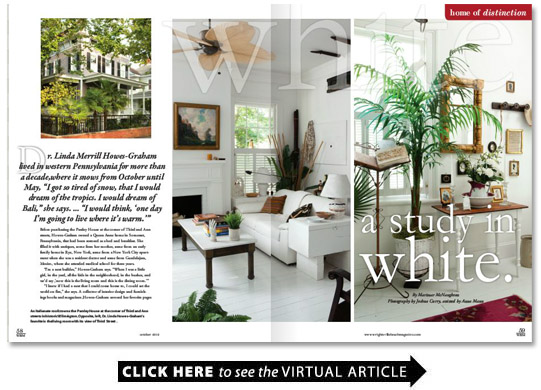 Before purchasing the Parsley House at the corner of Third and Ann streets Howes-Graham owned a Queen Anne home in that had been restored as a bed and breakfast. She filled it with antiques some from her mother some from an early family home in some from a apartment when she was a resident doctor and some from where she attended medical school for three years.

Im a nest builder Howes-Graham says. When I was a little girl in the yard all the kids in the neighborhood in the bushes and wed say now this is the living room and this is the dining room.

I knew if I had a nest that I could come home to I could set the world on fire she says. A collector of interior design and furnishings books and magazines Howes-Graham savored her favorite pages during the long winters before moving to in 2004.

Searching the southern Atlantic coast with a couple of friends Howes-Graham says she fell in love with .

At that time there were lots of houses for sale in the historic district Howes-Graham says.

Wanting a house with three bedrooms and three bathrooms she looked at 25 or 30 most with tiny rooms before she found the floorplan she wanted.

This one had three floors and absolutely basic rectangular rooms she explains.

When she purchased the Parsley House in 2000 the front hall was painted forest green the living room a deep cherry red and the floors were a horrible mess she says. She waited for four years to sell her home. In the meantime she hired a contractor to begin work on her new house.

I told him I wanted everything white she says. First time I came back down after I bought the house they had taken a spray gun and just sprayed. The windows were sprayed. Everything was sprayed. It was half sprayed and half not.

Starting over she told them I want white white white white. I dont want cream. White Is White is Benjamin Moore a really cool white not a hot white. The floors had all this paint sprayed all over everything. I was sleeping in the upstairs bedroom and it was so awful. I put a sheet down. I just had a mattress. It was a white sheet. It looked so nice. Thats when I thought the heck with it. Ill just paint the floors white.

The house has a front porch that overlooks facing east and a side porch on facing south yet because of the tree canopy it does not attract a lot of sunlight to its interior living rooms.

I found through the years the lighter it was the happier I was she says.

For privacy in her front room Howes-Graham hung wide slat working shutters on the lower half of the windows. To allow the passage of daylight into the living room the upper halves of the windows are uncovered. The view exposes the rough bark and leafy foliage of nearby trees. Those elements are reiterated in the warmth of natural wooden objects and the vibrant green of large leafed plants. Hung against stark white walls and arranged on polished white floors Howes-Grahams design feels life affirming. This room is her favorite.

I like to see the world going by she says. I live in this room the most and my bedroom.

Howes-Graham who acquired her mothers love of antiques admits I love primitive ancient looking [things] that have soul that have texture. When I got here I started liking the way designers mix very primitive stuff with beautiful modern furniture.

There are carved cornices at the doorways to rooms a crucifix from Mexico a standing candelabra from Spain. The atmosphere evokes an Old World sensibility like some seacoast captain landing here and unpacking his trunks. Some of her pieces from Bali and Burma were purchased from the Banana Tree in Alexandria Virginia once a three-hour journey from her Pennsylvania home. Others were acquired from Wilmington antique dealer Michael Moore and African art dealer Charles Jones. This month Howes-Graham will travel to South Africa for the first time. She hopes to come home with a zebra trophy that she plans to mount in the entry hall.

Her homes side hall plan supports the arrangement of rooms off narrow corridors.

In two of these corridors Howes-Graham has placed mantels that appear to be authentic to the historic structure. But she uses them to display more of her treasures.

On the main level the living room and dining room open off the corridor that ends with an entrance into the galley kitchen where Howes-Graham has herself painted a lively Caribbean seacoast scene. She has even scored the walls with faint black lines to lend the appearance of horizontal wall planks.

The kitchen extends the width of the house at its rear and opens again into the dining room where a long table offers seating for eight or ten guests. The dining room adjoins the homes side porch overlooking historic Ann Street.

Upstairs the corridor leads to a guest room which adjoins its own bath equipped with authentic cast iron claw foot soaking tub and the master suite.

With its own living room powder room and rear study and entry into the brick paved courtyard the ground level wing awaits its next houseguest. On this floor where the Parsleys originally located their kitchen antiquated 1850s plumbing was reworked inside a custom built in armoire that when opened reveals a tub and shower.

I remember one day a couple years after I had lived here it was in the fall. I was running an errand driving in the car and I thought Why am I so relaxed? And I thought its because winters coming and Im not up North she says. Fall is so beautiful. Winters beautiful. Everything. You go to the beach in winter.