A Stitch in Time: Thread Counts 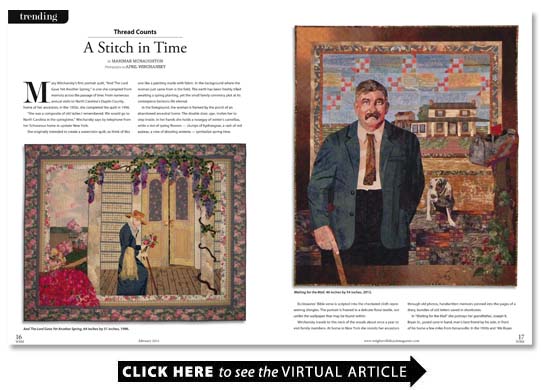 Mary Wirchansky s first portrait quilt And The Lord Gave Yet Another Spring is one she compiled from memory across the passage of time. From numerous annual visits to North Carolina s Duplin County home of her ancestors in the 1950s she completed the quilt in 1996.

She was a composite of old ladies I remembered. We would go to North Carolina in the springtime Wirchansky says by telephone from her Schenevus home in upstate New York.

She originally intended to create a watercolor quilt so think of this one like a painting made with fabric. In the background where the woman just came from is the field. The earth has been freshly tilled awaiting a spring planting yet the small family cemetery plot at its centerpiece beckons life eternal.

In the foreground the woman is framed by the porch of an abandoned ancestral home. The double door ajar invites her to step inside. In her hands she holds a nosegay of winter s camellias while a riot of spring flowers — clumps of hydrangeas a rash of red azaleas a vine of drooling wisteria — symbolize spring time.

Ecclesiastes  Bible verse is scripted into the checkered cloth representing shingles. The portrait is framed in a delicate floral textile not unlike the wallpaper that may be found within.

Wirchansky travels to this neck of the woods about once a year to visit family members. At home in New York she revisits her ancestors through old photos handwritten memoirs penned into the pages of a diary bundles of old letters saved in shoeboxes.

In Waiting for the Mail she portrays her grandfather Joseph K. Bryan Sr. posed cane in hand man s best friend by his side in front of his home a few miles from Kenansville. In the 1930s and  40s Bryan sent letters to his daughter Wirchansky s mother as she traveled around the country from North Carolina to New York California and back east to New York where she met and married her husband.

Wirchansky transferred the handwritten letters onto fabric along with stamps from the era then stitched the fabric pieces into place in the sky.

The most amazing quote from the letters was written during the Depression she says. The Lord will provide. One time since you were here we got down to 10 cents in cash on hand but before night we had collected $20 on debts owing us. If you serve the Lord you can depend on him.

This quilt has like the letters that inspired it traveled the country winning many ribbons in Vermont New Hampshire Pennsylvania Ohio Michigan California and Florida where it was named Best of Country-USA in the International World Quilt Competition in November 2012 in Palm Beach. When it was exhibited during the North Carolina Quilt Symposium Quilt Show in May 2014 at the Burney Center at the University of North Carolina Wilmington it won Innovative first place; Best of Show Other and Viewer s Choice.

My grandfather s mother Susie A. Pearsall who married Kedar Bryan who also lived just outside of Kenansville wrote a diary from 1869 to 1875. It s in the UNCG library archives Wirchansky says. I did a portrait quilt of her with some other pictures on it. And although it s not as clearly visible in the background I also copied excerpts from her diary into that.

Wirchansky s family home is about one-half mile from the Pearsall gate and cemetery. Four generations of her grandparents are buried there. In the 2014 North Carolina show her quilt The Pearsall Gate won Large Wall Hanging Mixed first place. Through black cast iron bars we see the cardinal that signifies life and spring once more.