A Stand Up Activity 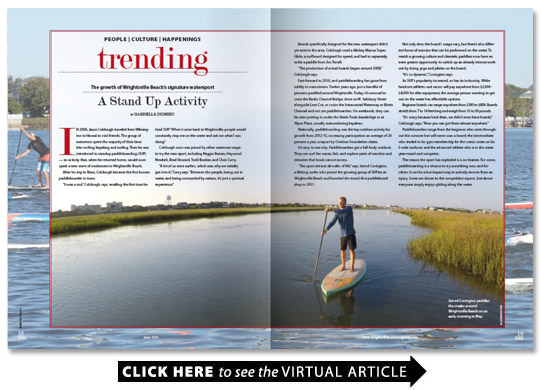 In 2006 Jason Colclough traveled from Wilmington to Hawaii to visit friends. The group of watermen spent the majority of their time kite-surfing kayaking and surfing. Then he was introduced to standup paddleboarding (SUP) — an activity that when he returned home would soon spark a new wave of excitement in Wrightsville Beach.

After his trip to Maui Colclough became the first known paddleboarder in town.

“It was a riot ” Colclough says recalling the first time he tried SUP. “When I came back to Wrightsville people would constantly stop me on the water and ask me what I was doing.”

“A lot of us were surfers which was why we initially got into it ” Curry says. “Between the people being out in water and being surrounded by nature it’s just a spiritual experience.”

Boards specifically designed for the new watersport didn’t yet exist in the area. Colclough used a Mickey Munoz Super Glide a surfboard designed for speed and had to separately order a paddle from Jim Terrell.

“The production of actual boards began around 2008 ” Colclough says.

Fast-forward to 2018 and paddleboarding has gone from oddity to mainstream. Twelve years ago just a handful of pioneers paddled around Wrightsville. Today it’s unusual to cross the Banks Channel Bridge drive on W. Salisbury Street alongside Lees Cut or cruise the Intracoastal Waterway or Motts Channel and not see paddleboarders. On weekends they can be seen putting in under the Heide Trask drawbridge or at Wynn Plaza usually outnumbering kayakers.

Nationally paddleboarding was the top outdoor activity for growth from 2012-15 increasing participation an average of 26 percent a year a report by Outdoor Foundation states.

It’s easy to see why. Paddleboarders get a full-body workout. They can surf the waves fish and explore parts of marshes and estuaries that boats cannot access.

“The sport attracts all walks of life ” says Jarrod Covington a lifelong surfer who joined the growing group of SUPers at Wrightsville Beach and founded the town’s first paddleboard shop in 2011.

Not only does the board’s usage vary but there’s also different forms of exercise that can be performed on the water. To match a growing culture and clientele paddlers now have an even greater opportunity to switch up an already intense workout by doing yoga and pilates on the board.

As SUP’s popularity increased so has its inclusivity. While hardcore athletes and racers will pay anywhere from $2 000-$4 000 for elite equipment the average person wanting to get out on the water has affordable options.

“It’s crazy because back then we didn’t even have boards ” Colclough says. “Now you can get them almost anywhere.”

Paddleboarders range from the beginner who rents throughout the summer but will never own a board; the intermediate who traded in his gym membership for the scenic route on his 5-mile workout; and the advanced athlete who is in the water year-round and competes.

The reason the sport has exploded is a no-brainer. For some paddleboarding is a chance to try something new and for others it can be a low-impact way to actively recover from an injury. Some are drawn to the competitive aspect. Just about everyone simply enjoys gliding along the water.

Regardless of the motivation behind getting on a board there are very few activities like it that allow participants to be fully immersed in nature.

“Have you been to a gym in Wilmington?” Colclough asks. “Wouldn’t you rather be out on the water? You burn more calories there’s fewer negative impacts on your body and let’s face it the scenery is a whole lot better than a gym.”

John Beausang turned to the sport as a way to rehabilitate his back. Rather than getting surgery to fix two herniated discs he opted for an overall lifestyle change that included core-strengthening exercises including SUP.

“Before I started paddleboarding my back would go out a few times a year ” he says. “Since then I’ve been able to avoid subsequent injuries. What started as a health benefit ended up being the start of a decade of immersion into a wonderful paddling culture.”

In addition to being a well-respected waterman Beausang runs the Distressed Mullet a website that has posted over 15 000 articles on SUP.

His love of paddleboarding led him to co-create one of Wrightsville’s many SUP races. After traveling to other competitions Beausang in conjunction with Newkirk Howard James Bain William Pope and Mark Schmidt created the Wrightsville Beach Paddle Club and hosted the first ever Carolina Cup in 2011.

Beausang and Schmidt still direct the race. Beausang handles the majority of the community engagement while Schmidt is more focused on the operations and expansion.

The rising popularity of paddleboarding can be seen in the explosive growth of the Carolina Cup. About 170 paddlers competed the first year. In 2012 it was the largest race on the East Coast with over 400 paddlers. The 2015 event was the largest SUP event in the world organizers say.

“Some people who competed in the original race have even moved here ” Beausang says.

Over 1 000 paddlers from more than 20 countries came to Wrightsville Beach for this year’s Carolina Cup which took place April 21-22. They competed in one of several events including a kids race the Harbor Island Recreational “fun” race Money Island open race and the elite race: a grueling 13.2-mile contest known as The Graveyard.

Sonni H�nscheid of Germany and Michael Booth of Australia captured the women’s and men’s titles in the latter race cementing the Cup’s status as a truly international sporting event.

New this year the Carolina Cup partnered with University of North Carolina Wilmington’s human performance lab to get a scientific look at how these athletes are performing. The goal is for UNCW to gather data on some of the top athletes with the hopes of publishing studies to further expand research on the benefits of SUP.

In addition to personifying the popularity of paddleboarding the event also provides an economic benefit.

“In the second year of the race we brought in over half a million dollars to the city ” Beausang says. “We haven’t run an economic impact race since then but I couldn’t imagine what it is today.”