A Splash of Color 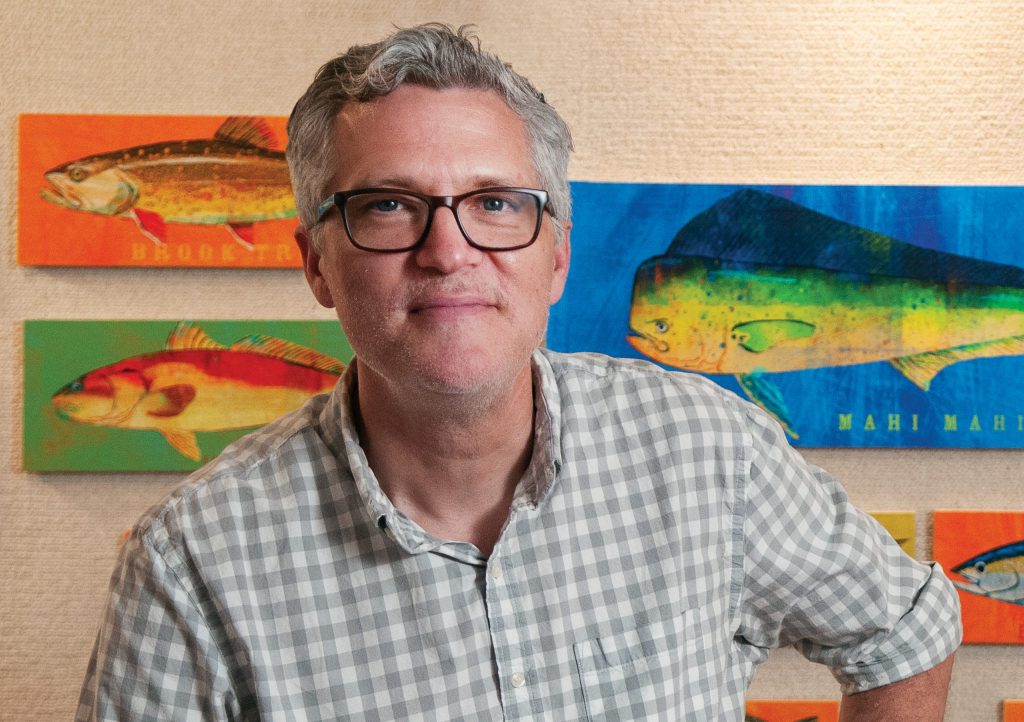 Wilmington artist John W. Golden displays his illustrations alongside the work of his mother, Mary Ellen Golden, at the Golden Gallery in downtown Wilmington. | Allison Potter

The coastal waters of North Carolina are teeming with an exotic collection of sea life. From the spot to the tarpon, the skipjack tuna to the lemon shark, the ocean is home to a vast and diverse collection of swimming critters that has captured the imagination of artists for thousands of years.

That includes John W. Golden. His series “Coastal Decor” has been growing in both size and popularity since 2006, but now he is using modern technology to do something new with these age-old marine muses.

Golden is a digital artist, but his pieces are not confined to the two-dimensional prison of a computer screen. His fish jump out at the viewer in a splash of color from the three-dimensional birchwood boards they live on. Creating one of his famous fish is a multi-phased process that starts on the computer but ends in a tactile and bold piece that immediately draws the eye.

The process starts in Photoshop, where Golden creates his own brushes with custom textures and unique colors. His work is a wide departure from the gray and aquamarine color palette in vogue with much of contemporary coastal art, but he thinks that is a good thing. It’s what draws people to the work.

“I could go back into Photoshop and change it more to that coastal color palette,” he says. “But just because you can do something, doesn’t mean you should.”

Skateboards and skateboard art are a huge inspiration.

“I’ve always loved the way each layer of maple wood is stacked on top of the next. It creates a cool visual effect,” he says.

That visual effect is echoed in the three-quarter-inch birch plywood each print is applied to, adding new energy to the already gorgeous drawings. The rough and visible grooves in the woodwork give the pieces depth and character.

As a final step, Golden paints on a layer of clear coat water-based sealer. This creates brush strokes over the prints that help the colors catch the light.

The final result is a piece of digital art you can hold in your hand, a physical artifact with character and personality. The pieces are made to order and vary in size from a three-foot-wide board to a “fish stick” that will fit right in the palm of your hand.

Golden’s works undergo a long and time-consuming metamorphosis between their conception on his computer to his clients’ wall when they take a piece home, but he says it’s well worth it.

“As much as the computer has become the most significant tool I have, the time before the computer rooted me in analog art and gave me a desire to make it look as authentic as possible,” he says. “The last thing I want is for someone to look at my art and say, ‘Oh, that’s just made on a computer.’”

Golden, who has been making art for more than 40 years, fondly looks back on that idyllic “time before the computer.” He remembers his first show: a series of prints put on display at his mother’s gallery when he just 11 years old.

“They sold well,” he says with a smile. “We put them on Japanese paper, so they were very rustic looking. The prints were made from wood linoleum printing plates, and I was so young my mom [Wilmington watercolor artist Mary Ellen Golden] had to help me to make sure I didn’t cut myself while putting them together.”

His art career continued to evolve. He studied graphic design in college, and his combined knowledge of traditional art forms and digital media has culminated in the wonderful collection of hybrid art that is “Coastal Decor.”

It has been almost 15 years since Golden started his first installment for the collection — an expressive tarpon — but the project is kept fresh by the challenge to make each fish unique.

“It’s like solving a puzzle, and that’s what gets me most excited,” he says. “It forces me to draw on the right side of my brain; to stop looking at something as a whole and to start breaking it up into shapes. I’ll know it’s done when it looks like a fish, but I don’t necessarily know how I’m going to get from a blank page to a finished product, so it’s fun to see what happens in between. There’s something meditative about it.”

That creative process has inspired Golden over his career, and is a requisite for anyone who aspires to make art.

“Prioritize the things you love,” he says. “You don’t have to quit your day job and become a full-time artist if you want to create art. What’s really important is that if you love making things, whether that’s music, or paintings, or prints, you don’t stop doing it. Even if it’s on a small scale. I recently started playing music again. I put the guitar down for almost 18 years, and sometimes I kick myself at what a great guitarist I could have been if I just hadn’t stopped. In short, if you love doing something, do it.”