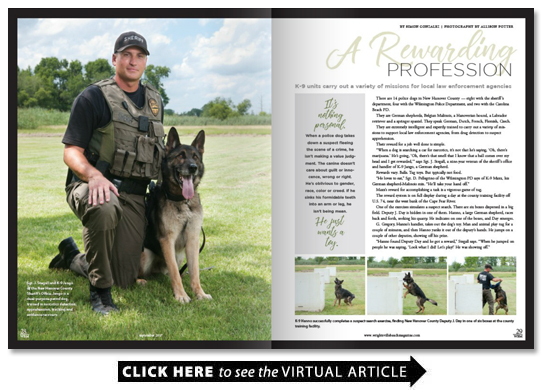 When a police dog takes down a suspect fleeing the scene of a crime he isn’t making a value judgment. The canine doesn’t care about guilt or innocence wrong or right. He’s oblivious to gender race color or creed. If he sinks his formidable teeth into an arm or leg he isn’t being mean.

He just wants a toy.

There are 14 police dogs in New Hanover County — eight with the sheriff’s department four with the Wilmington Police Department and two with the Carolina Beach PD.

They are German shepherds Belgian Malinois a Hanoverian hound a Labrador retriever and a springer spaniel. They speak German Dutch French Flemish Czech.

They are extremely intelligent and expertly trained to carry out a variety of missions to support local law enforcement agencies from drug detection to suspect apprehension.

Their reward for a job well done is simple.

“When a dog is searching a car for narcotics it’s not that he’s saying ‘Oh there’s marijuana.’ He’s going ‘Oh there’s that smell that I know that a ball comes over my head and I get rewarded ‘” says Sgt. J. Stegall a nine-year veteran of the sheriff’s office and handler of K-9 Jango a German shepherd.

“He loves to eat ” Sgt. D. Pellegrino of the Wilmington PD says of K-9 Maxx his German shepherd-Malinois mix. “He’ll take your hand off.”

Maxx’s reward for accomplishing a task is a vigorous game of tug.

The reward system is on full display during a day at the county training facility off U.S. 74 near the west bank of the Cape Fear River.

One of the exercises simulates a suspect search. There are six boxes dispersed in a big field. Deputy J. Day is hidden in one of them. Hanno a large German shepherd races back and forth seeking his quarry. He indicates on one of the boxes and Day emerges.

G. Gregory Hanno’s handler takes out the dog’s toy. Man and animal play tug for a couple of minutes and then Hanno yanks it out of the deputy’s hands. He jumps on a couple of other deputies showing off his prize.

“Hanno found Deputy Day and he got a reward ” Stegall says. “When he jumped on people he was saying ‘Look what I did! Let’s play!’ He was showing off.”

Hanno’s training day isn’t over. Next up is an apprehension drill. Stegall dons a padded bite sleeve. Hanno starts barking and snapping his fearsome jaws. Gregory gives the 90-pound canine the command and he’s on his target in a flash. He clamps down on Stegall’s arm pulling the man to the ground.

He keeps his powerful grip until his handler gives the release command. Hanno immediately lets go and begins to look for his toy.

“When Sgt. Stegall had the sleeve on all he wanted to do was crush his arm ” Day says. “They’re trained to crush it and hold him until we get there. But after that when he took the sleeve off he came to the Sarge and wanted to play. It’s like Jekyll and Hyde. They can turn it on and turn it off.”

The dogs might be in it for the playtime but being a police K-9 — and a K-9 handler — is serious business.

It can be a high-stress job.

“We have two people to worry about our dog’s safety plus our safety ” says D. Soward a corporal with the Carolina Beach PD and the handler of K-9 Nox. “When there is a dangerous situation we’re the front-runners typically. We’re the first ones in. It’s what you got in the job for.”

The K-9 units primarily exist to augment and aid the officers on the street.

“Our main objective is to assist patrol ” Pellegrino says. “We’re not assigned to a sector a geographical area. We float the city. When patrol is busy we assist them on calls. If there’s an area that’s getting hit with a lot of breaking and enterings we’ll go over there and be visible in those areas and try to deter it some.”

Patrol duty is handled by dual-purpose canines dogs trained in narcotics detection apprehension tracking and evidence recovery. They are the German shepherds and Belgian Malinois breeds known for their strength intelligence and agility.

It doesn’t hurt that they look and sound ferocious traits that come in handy when chasing the bad guys.

“It is a factor ” Stegall says. “They are intimidated and a lot of times they will give up.”

The sheriff’s department has five dual-purpose dogs the Wilmington PD four and the Carolina Beach PD two. The sheriff’s office also has three specialty K-9s trained to search for missing persons and for bomb and drug detection.

The latter group includes the county’s superstar dog K-9 Bane. The Hanoverian hound made national news when he found a kidnapped 6-year-old girl in September 2016. Bane tracked her into the woods off River Road and found her chained to a tree.

“When Bane found the little girl we had a lady from Colorado send a first aid kit designed specifically for K-9s ” says Lt. J.J. Brewer public information officer of the sheriff’s department. “We had people sending spa treatments and goodie bags. People were calling from all over the country sending cards.”

Bane’s handler then was S. Dixon who has since left the unit. Master Deputy G. Pedersen who joined the sheriff’s department in 2009 after 22 years with the New York City PD has been in charge of Bane since May.

A celebrity to the public maybe but the deputies affectionately call him the department goofball. Bane belies the stereotype of a police dog. His job is to find missing children and dementia patients who wander off. He doesn’t track suspects so he is not trained to be aggressive.

“When he is tracking and he finds you he’s going to lick you he’s going to jump in your lap ” Stegall says. “He’s happy. And he knows food is coming. He has a food reward. The dog loves those little dollar packets of tuna.”

Bane might never track and apprehend a suspect but he does use the same tool as his more aggressive kennel mates.

The German shepherds and Belgian Malinois are adept at tracking suspects through buildings or through the woods — “That’s the coolest part of the job when you’re tracking someone in the woods ” says Cpl. K. Vithalani a 17-year veteran of the Wilmington PD and handler of K-9 Sultan.

But Pellegrino says the most common calls are drug sniffs. When a patrol unit pulls over a vehicle or enters a building and smells drugs or suspects drugs are involved the K-9s are called in.

“When we get there we’ll walk the dog around the car and see if we get an indication ” Pellegrino says. “They all sit on the odor of narcotics so there’s no damage to the vehicles. In the past every dog used to be aggressive where they all scratched. The trend is everything has become passive to avoid issues with scratching paint.”

The department trains the dogs with samples of illegal drugs obtained from the Drug Enforcement Administration.

“The dogs don’t know what drug they are indicating on they are just indicating on odor ” Pellegrino says. “I like to use the analogy of popcorn. You pop popcorn in the microwave. You eat it and it’s gone. But you still smell it because it stinks up your whole house. That’s what the dog is looking for. He’s looking for the odor not the source. If I have marijuana on my hands and I touch this wall the dog is going to indicate here. That’s how we do it.”

A discriminating nose is common to all the dogs but a language isn’t. Commands are given in a variety of European tongues. But it’s not to prevent suspects from countermanding a handler’s order.

“The common myth is you think we do that so you can’t speak to my dog ” Stegall says. “That’s not true. It’s because that’s what they’re taught over there. When they are brought over here to the United States their whole world has changed. It’s a lot of stress. You can see it in his face. So we say we’ll learn your language.”

The handlers only have to learn a few basic commands in a foreign language.

“Sit down stay bite article search. Not a lot ” Pellegrino says. “We don’t have to become fluent. If that were the case it would be an issue for us simple-minded people.”

They also don’t have to pronounce the words like a native.

“I promise you we don’t say the words right ” Stegall says. “Our Southern twang is twisted on there somewhere. But then the dogs adapt to us.”

They come from countries like Holland Germany and the Czech Republic because those countries produce the best working dogs — the top 1 percent in the world.

All the dogs in New Hanover County came from a vendor in Oxford Florida which imports them from Europe. Prices range from $9 000 for a dog with basic obedience to $20 000 for a dog that is street ready.

When a K-9 retires or when the budget allows for an additional dog Stegall goes to Florida looking for something very specific in what will be the newest member of the force. But it might not fit the common perception of police dogs.

“When you think police K-9 you probably think big bad biting dog right? Mean dog ” Stegall says. “We speak to Boy Scouts we speak at church groups we speak at schools. When that dog comes out everybody gets real quiet and real still and they get nervous. Every time. We do not go down there and look for the biggest baddest dog. I have children these guys have children we’re in the schools we’re in the public. That’s not what we want. We want a very social dog. I can bring him out you can pet him we can all play and then somebody can come out and he can detect that threat and it’s a different mode.”

The men and women who are drawn to this work all have something in common: they love dogs.

“I’ve always grown up around dogs ” says Cpl. K. Murphy a four-year veteran of the Wilmington PD and handler of K-9 Diablo.

Yet if they go in thinking their K-9 will become something like a favorite pet they quickly learn otherwise.

“It’s a lot of work ” Pellegrino says. “You have to get your dog ready to go. Weather doesn’t mean anything to us. We’re out there in the rain. We’re on call for two weeks out of every eight. That’s a lot of on-call taking time away from your family.”

It requires a big commitment. The dogs live with the handlers. There’s vet appointments feeding upkeep and ongoing training to keep the animal sharp. But there are also rewards.

“The whole aspect of being partner with a dog being able to hunt someone down that’s pretty cool ” Vithalani says.

Conversations tend to be one-sided when you work with a K-9 but that can be OK.

“You never have to argue about where you’re going to eat with your partner ” Murphy says.