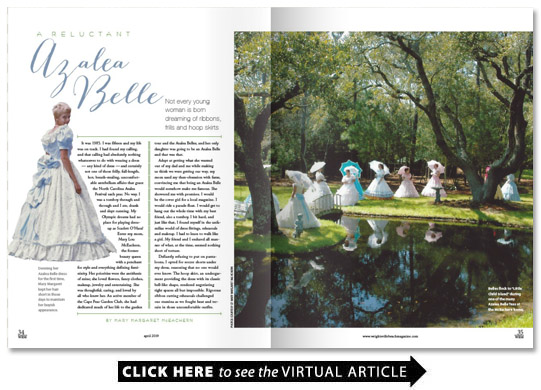 It was 1985. I was fifteen and my life was on track. I had found my calling and that calling had absolutely nothing whatsoever to do with wearing a dress — any kind of dress — and certainly not one of those frilly full-length hot breath-stealing uncomfortable antebellum affairs that grace the North Carolina Azalea Festival each year. No way. I was a tomboy through and through and I ate drank and slept running. My Olympic dreams had no place for playing dress-up as Scarlett O’Hara!

Enter my mom Mary Lou McEachern the former beauty queen with a penchant for style and everything defining femininity. Her priorities were the antithesis of mine; she loved flowers fancy clothes makeup jewelry and entertaining. She was thoughtful caring and loved by all who knew her. An active member of the Cape Fear Garden Club she had dedicated much of her life to the garden tour and the Azalea Belles; and her only daughter was going to be an Azalea Belle and that was that.

Adept at getting what she wanted out of my dad and me while making us think we were getting our way my mom used my then-obsession with fame convincing me that being an Azalea Belle would somehow make me famous. She showered me with promises. I would be the cover girl for a local magazine. I would ride a parade float. I would get to hang out the whole time with my best friend also a tomboy. I bit hard and just like that I found myself in the unfamiliar world of dress fittings rehearsals and makeup. I had to learn to walk like a girl. My friend and I endured all manner of what at the time seemed nothing short of torture.

Defiantly refusing to put on pantaloons I opted for soccer shorts under my dress reasoning that no one would ever know. The hoop skirt an undergarment providing the dress with its classic bell-like shape rendered negotiating tight spaces all but impossible. Rigorous ribbon cutting rehearsals challenged our stamina as we fought heat and terrain in those uncomfortable outfits. We were rewarded for our hard work however with a festive tea party during which we enjoyed wonderful homemade goodies and fun photo sessions in a pretty place. Pictures equaled fame and that was all right with me.

The ribbon cutting took place on a glorious day in Forest Hills and my friend and I were chosen to escort Queen Azalea herself to cut the ribbon. We had become comfortable in our roles and even began to enjoy those ridiculous dresses which were not a bad tradeoff for all of the attention we were getting.

The garden tour opened with the ribbon cutting and it was hot that year. We served as ambassadors in several gardens throughout the weekend standing in oppressive heat for hours. I thanked my lucky stars for comfortable shoes and my light-colored cotton dress which was much cooler than most. The garden owners looked out for us with lemonade and cookies which convinced us that they were angels.

We were among the lucky few chosen to ride in the parade which while thrilling was even more exhausting than garden duty. The constant smiling and waving gave me newfound respect for career beauty queens and other celebrities. When the parade ended we were off to garden duty for two solid days. It was a long weekend.

When our stint finally ended we were exhausted but happy for the experience. We had learned much about local history. We had tasted the rigors of antebellum living and how to handle it with aplomb. We learned a bit about manners and social graces. My Azalea Belle “career ” while brief taught me lifelong lessons and gave me some of my most cherished memories.

The experience brought me closer to my mom who went on to chair the garden tour the following year. She loved all the pageantry and beauty and she loved her friends so staying involved was huge for her. She began sponsoring Azalea Belles and one year she hosted the tea. Our home on Cedar Island was built for entertaining. The expansive lawn fronting the Intracoastal Waterway with its wooded areas and large reflecting pond proved the perfect spot. The event had previously rotated annually but it found a home with my parents. Ever the social butterfly my mom relished the opportunity. The house had large covered verandas from which the view of the Belles gathered on the lawn was stunning.

Even my dad got in on the act. Not previously known for espousing the “frilly ” he so enjoyed designing pink signs and putting pink bows on everything he could get his hands on. The garden club members deciding that he belonged made him an honorary member. He proudly held this title for the remainder of his days.

I was away at school during much of this time. But when possible I came home to help decorate. My favorite job however was that of golf cart chauffeur for more than 100 fully adorned Azalea Belles. The event had grown significantly since my Belle days. With Belles parents media and garden club members we were hosting more than 200 people. Cars lined the road for a half mile and my golf cart provided welcome relief from what would be a tough trudge in full Azalea Belle regalia.

My dad passed away suddenly in 2004. This devastated us but we were buoyed by the support of so many wonderful friends my parents had made through the garden club and through hosting the tea. That support enabled my mom to continue holding the tea until her sudden passing in 2012. Losing her in the same manner as losing my dad was awful and I could not emotionally handle the house which seemed to have itself died along with my mom. I had to let go which meant the tea would have to find a new home.

But not before my parents’ wonderful garden club friends rescued me once more enabling my husband and me to host the tea one last time. It was a glorious day and the Belles seemed to shine brighter than ever providing a beautiful backdrop and framing so many fond memories. I had come full circle ending a journey that started with aversion and finished with appreciation for all things Azalea Belle.

My mom adored her garden club and the garden club adored her so much so that the members renamed the tea in her honor. It is now formally known as the Mary Lou McEachern Azalea Belle Tea. My home my family and that chapter of my life may be gone with the wind but the memories are revived each spring with the promise of new life symbolized so appropriately by each new generation of Azalea Belles. What at first seemed dreadful so long ago has transformed me in ways for which there are no words. Being an Azalea Belle is a once-in-a-lifetime opportunity — a treat that I would trade for nothing!