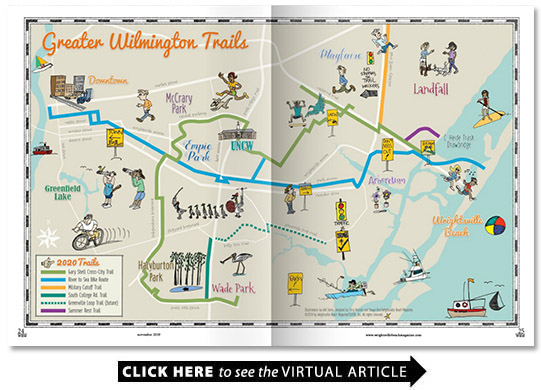 As Wilmington traffic continues to writhe its way toward critical mass the thought of biking or walking to a destination in the cool respite of shady trees and tranquil pathways becomes all the more appealing.

It’s been a long time coming but since February this year runners walkers and cyclists can hop on the Gary Shell Cross-City Trail at the Heide Trask Drawbridge and get just about anywhere across town. After a $35 million Parks and Greenspace Bond passed in 2006 due in part to the work and vision of former City of Wilmington Parks & Recreation Director Gary Shell construction began to link the community together with a series of pedestrian and bicycle trails.

Inspired by the Appalachian Trail Shell was a longtime advocate for a cross-city trail. He was instrumental in planning the now 15-mile greenway which connects Wilmington’s parks and green spaces. More pathways are planned.

“They are deceivingly complex projects ” says Amy Beatty the city’s director of Community Services. “We often joke that they are stormwater projects with a path on top. Here on the coast since we’re so flat we are having to incorporate drainage designs and consider stormwater runoff. I think we’ve come a long way in a relatively short period of time. We were very inclusive of the public and that leveraged strong support to get the projects done. We’re pleased to have support from the public and the landowners; we’ve been very fortunate.”

“I’ve really noticed the number of users increase quite a bit lately ” Parks Supervisor Philip Pope says. “I’ve seen a lot more people jogging walking dogs and riding bikes on the trail. And that’s what we want to see — people using it to the full potential. The Audubon section [connecting Empie Park to Audubon Boulevard] was just finished and there were already a lot of people coming by using it and excited about this new section.”

“We try to do proactive inspections once or twice a month to catch anything that needs attention. And citizens are great about letting us know if there is an issue that needs addressing ” he says.

With Halyburton McCrary and Empie parks all offering access parking and restrooms the cross-city trail has begun to proliferate throughout central Wilmington providing new entry and exit points. The River to the Sea Bikeway even connects with the trail intersecting at Empie Park providing cyclists with an alternate route to get all the way downtown.

As additional extensions of the trail near completion further plans are in development. They include making the trail a part of the East Coast Greenway system which will stretch from Florida to Maine.

“There are several trail projects from the 2014 bond in varying stages of completion though the [Gary Shell] Cross-City Trail is now complete which serves as the spine of New Hanover County’s Greenway ” Beatty says. “Each new greenway added will have its own name.”

Shell died after a battle with cancer in 2011 but his namesake and vision will continue to grow and thrive in the years to come.