A Passion for Preservation 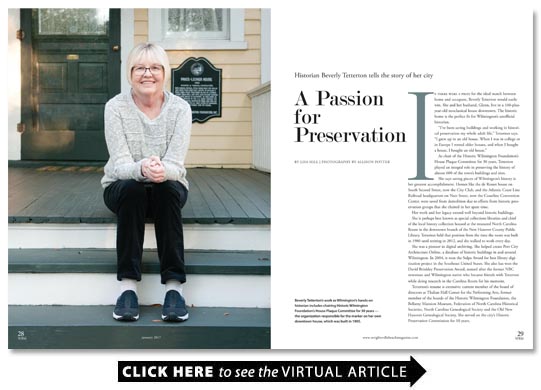 If there were a prize for the ideal match between home and occupant Beverly Tetterton would easily win. She and her husband Glenn live in a 100-plus-year-old neoclassical house downtown. The historic home is the perfect fit for Wilmington’s unofficial historian.

“I’ve been saving buildings and working in historical preservation my whole adult life ” Tetterton says. “I grew up in an old house. When I was in college or in Europe I rented older houses and when I bought a house I bought an old house.”

As chair of the Historic Wilmington Foundation’s House Plaque Committee for 30 years Tetterton played an integral role in preserving the history of almost 600 of the town’s buildings and sites.

She says saving pieces of Wilmington’s history is her greatest accomplishment. Homes like the de Rosset house on South Second Street now the City Club and the Atlantic Coast Line Railroad headquarters on Nutt Street now the Coastline Convention Center were saved from demolition due to efforts from historic preservation groups that she chaired in her spare time.

Her work and her legacy extend well beyond historic buildings.

She is perhaps best known as special collections librarian and chief of the local history collection housed at the treasured North Carolina Room in the downtown branch of the New Hanover County Public Library. Tetterton held that position from the time the room was built in 1980 until retiring in 2012 and she walked to work every day.

She was a pioneer in digital archiving. She helped create Port City Architecture Online a database of historic buildings in and around Wilmington. In 2004 it won the Solpa Award for best library digitization project in the Southeast United States. She also has won the David Brinkley Preservation Award named after the former NBC newsman and Wilmington native who became friends with Tetterton while doing research in the Carolina Room for his memoirs.

Tetterton’s resume is extensive: current member of the board of directors at Thalian Hall Center for the Performing Arts former member of the boards of the Historic Wilmington Foundation the Bellamy Mansion Museum Federation of North Carolina Historical Societies North Carolina Genealogical Society and the Old New Hanover Genealogical Society. She served on the city’s Historic Preservation Commission for 10 years.

Tetterton is also the author of several books. She and Glenn compiled a “North Carolina County Fact Book ” visiting every county in the state during the course of their research. “Wilmington: Lost But Not Forgotten” is an illustrated guide to vanished city landmarks from the old Atlantic Coast Line station to the Bailey Theater on Front Street.

“If it wasn’t for Beverly the city would know a lot less about itself ” says Dan Camacho Tetterton’s partner in her current venture Java Dog Press. “If you read any history book on Wilmington all of these authors have gone to Beverly and asked her for help. A lot of these resources wouldn’t be what they are if not for Beverly. She’s a vital cog in the memory of the city.”

Retirement from a life of work and service generally means relaxation. For Tetterton that is not entirely the case.

Since retiring from the library in July 2012 she has found more time to devote to her own history researching her family through old photographs and getting a DNA test to find out her genealogy. And she pursues other passions: reading traveling to far-off locations like Ireland and getting ready for the arrival of her first grandchild.

For some such pursuits and a lifetime of achievement and accolades might be enough. But Tetterton’s vocation of documenting local history is a call she just can’t ignore and she is still deeply involved in preserving Wilmington’s history and stories for new audiences.

“There are some things that you don’t just give up ” Tetterton says. “When I retired as a librarian why give up historic preservation?”

When the city expanded the Riverwalk city leaders leveraged Tetterton’s expertise to author the plaques that document the history of maritime Wilmington. These signs like chapters of a book show visitors old photos of the area and give them a brief history lesson as they stroll along the Cape Fear River.

Writing these Riverwalk signs was one of the hardest things she has ever done.

“To write small is more difficult ” she explains.

On the Cape Fear River sign for example she had to condense the ecology and history of the river into about 200 characters.

In July 2016 Tetterton and Java Dog Press published a 26-page paperback book “A Brief History of Wilmington N.C.” Gareth Evans the executive director at the Bellamy Mansion and the owners of Two Sisters Bookery in the Cotton Exchange convinced Tetterton to write the short history book claiming that tourists don’t want a voluminous $25 book.

“To say history drives Beverly is too vanilla ” Camacho says. “She’s just innately curious about life. One way to understand life is to look back at history and see what other people have gone through and the struggles they’ve had and the solutions they come up with all the ebbs and flows. I think that’s what drives her. She’s a very curious person. She gets excited about picking up the most obscure little tidbit about some event years ago. She gets a rush from figuring things out whether it’s the genealogy or the history of the building. Every time I meet with her it’s a history class.”

The venture gives Tetterton another outlet to pursue her passion for history by doing original research. Like many historians she tells a fascinating story.

“The buildings that I researched for the Pub Crawl were fun ” she says. “Slainte Irish Pub was built as a shoe store. They had 16 shelves of shoes on both sides of the building something like 5 000 pairs of shoes in the building and boots in the basement. They were the first store to pull a velvet curtain around a woman. Prior to this women would have to take shoes home to try them on and bring them back. It was the first shoe dressing room.”

Other pubs are just as interesting.

“I found out buildings that were robbed and how the robbers got away ” she says. “Duck and Dive Bar and Pub on Dock Street was a poultry store and then became a pornography shop. I mean you can’t make this up. I’ll tell you one thing: History is so interesting. There is no reason to make it up. If I hear a guide or someone say something that is absolutely preposterous I think ‘Why do you have to make this up when the actual history is so much more interesting?'”

When speaking about the type of legacy she’d like to leave Tetterton tells the story of a time she was giving a candlelight tour to visitors in the Temple of Israel on South Fourth Street. She says Rabbi Albert Gordon warned her what to expect.

“Rabbi Gordon said “‘These are the questions that people will ask you. They are more interested in Judaism than they are about the building. They will ask you ‘Do Jews believe in heaven and hell?’ I said ‘What do you believe Rabbi?’ He said ‘I believe we live on in the good things we do in our lives.'” I got to thinking about that. When I drive around Wilmington and I see a building that I saved or helped save or a plaque on a house that in the long run helped save the house too I feel like I’m going to live on in the good things that I’ve done.”