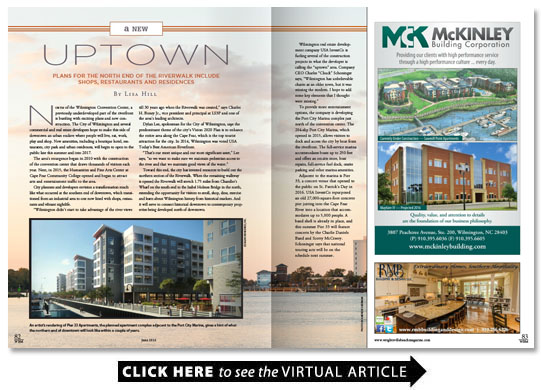 North of the Wilmington Convention Center a previously underdeveloped part of the riverfront is bustling with exciting plans and new construction. The City of Wilmington and several commercial and real estate developers hope to make this side of downtown an urban enclave where people will live eat work play and shop. New amenities including a boutique hotel restaurants city park and urban residences will begin to open to the public late this summer and into 2017.

The area’s resurgence began in 2010 with the construction of the convention center that draws thousands of visitors each year. Next in 2015 the Humanities and Fine Arts Center at Cape Fear Community College opened and began to attract arts and entertainment traffic to the area.

City planners and developers envision a transformation much like what occurred at the southern end of downtown which transitioned from an industrial area to one now lined with shops restaurants and vibrant nightlife.

“Wilmington didn’t start to take advantage of the river views till 30 years ago when the Riverwalk was created ” says Charles H. Boney Jr. vice president and principal at LS3P and one of the area’s leading architects.

Dylan Lee spokesman for the City of Wilmington says the predominant theme of the city’s Vision 2020 Plan is to enhance the entire area along the Cape Fear which is the top tourist attraction for the city. In 2014 Wilmington was voted USA Today’s Best American Riverfront.

“That’s our most unique and our most significant asset ” Lee says “so we want to make sure we maintain pedestrian access to the river and that we maintain good views of the water.”

Toward this end the city has invested resources to build out the northern section of the Riverwalk. When the remaining walkway is opened the Riverwalk will stretch 1.75 miles from Chandler’s Wharf on the south end to the Isabel Holmes Bridge in the north extending the opportunity for visitors to stroll shop dine exercise and learn about Wilmington history from historical markers. And it will serve to connect historical downtown to contemporary properties being developed north of downtown.

Wilmington real estate development company USA InvestCo is fueling several of the construction projects in what the developer is calling the “uptown” area. Company CEO Charles “Chuck” Schoninger says “Wilmington has unbelievable charm as an older town but it was missing the modern. I hope to add some key elements that I thought were missing.”

To provide more entertainment options the company is developing the Port City Marina complex just north of the convention center. The 204-slip Port City Marina which opened in 2015 allows visitors to dock and access the city by boat from the riverfront. The full-service marina accommodates boats up to 250 feet and offers an on-site store boat repairs full-service fuel dock onsite parking and other marina amenities.

Adjacent to the marina is Pier 33 a concert venue that opened to the public on St. Patrick’s Day in 2016. USA InvestCo repurposed an old 27 000-square-foot concrete pier jutting into the Cape Fear River into a location that accommodates up to 5 000 people. A band shell is already in place and this summer Pier 33 will feature concerts by the Charlie Daniels Band and Scotty McCreery. Schoninger says that national touring acts will be on the schedule next summer.

The marina area also includes two new restaurants under construction by Clancy and Theys that are set to open in 2016. Vida Mexican Kitchen a modern Mexican concept is targeting an August opening. BlackFinn Ameripub a sports bar with American cuisine is shooting for Labor Day.

In addition the City of Wilmington purchased a six-plus acre park site directly on the riverfront located north of Pier 33 and the restaurants. Once complete North Waterfront Park will offer passive sitting and shade areas as well as a concert venue. Currently the park is only open for special events but Lee says it should open to the public in about a year.

Also integral to a successful urban area are housing and hospitality options for residents to stay or live where they play. Several apartment and hotel projects are underway in northern downtown and will open over the next few years.

USA InvestCo is developing Hotel Indigo a boutique hotel as part of the marina complex. When it opens in 2017 the nine-story hotel will feature 125 rooms and a rooftop pool and lounge. Together with the Wilmington Convention Center Embassy Suites which is also slated to open in 2017 the two hotels offer a convenient location for visitors to attend the convention center and to experience entertainment options in the uptown area.

Two new apartment complexes will further fill the area’s residential needs. Developer DeWitt Carolinas in Raleigh has planned a seven-story mixed-use $50-million luxury complex called Pier 33 Apartments next to the marina. The complex will include 300 apartment homes ranging from studios to two- and three-bedroom homes. It will also feature 32 000 square feet of ground floor retail space a 700-space parking garage and a host of amenities for residents.

Construction is scheduled to begin in the third quarter of 2016 and Todd Saieed President and CEO of DeWitt Carolinas estimates the first phase of units will begin leasing in late 2017. The apartment complex sits on five acres of a seven-acre parcel and Saieed says DeWitt Carolinas is working on concepts to build out the additional two acres.

McKinley Building Corp. is developing the 280-unit Sawmill Point apartment complex north of the marina. The complex includes a gated parking deck standard granite kitchen counters and rooftop patios on some units. Residents will have the option to rent a boat slip. The first apartments will be available for lease in late 2016 or early 2017 says company president Ken Dull.

The goal for all this development is to draw even more people to the riverfront whether tourists or nearby residents.

“There are 200 000 people on the other side of the Cape Fear River in Brunswick County and they go to Myrtle Beach for entertainment ” Schoninger says. “We want to start attracting them to some nice stuff here in Wilmington. We need the assets to attract them so that’s what we’re trying to build.”