A Medley of Musical Milestones

As the Wilmington Symphony prepares for its golden anniversary concert, the focus is on the future 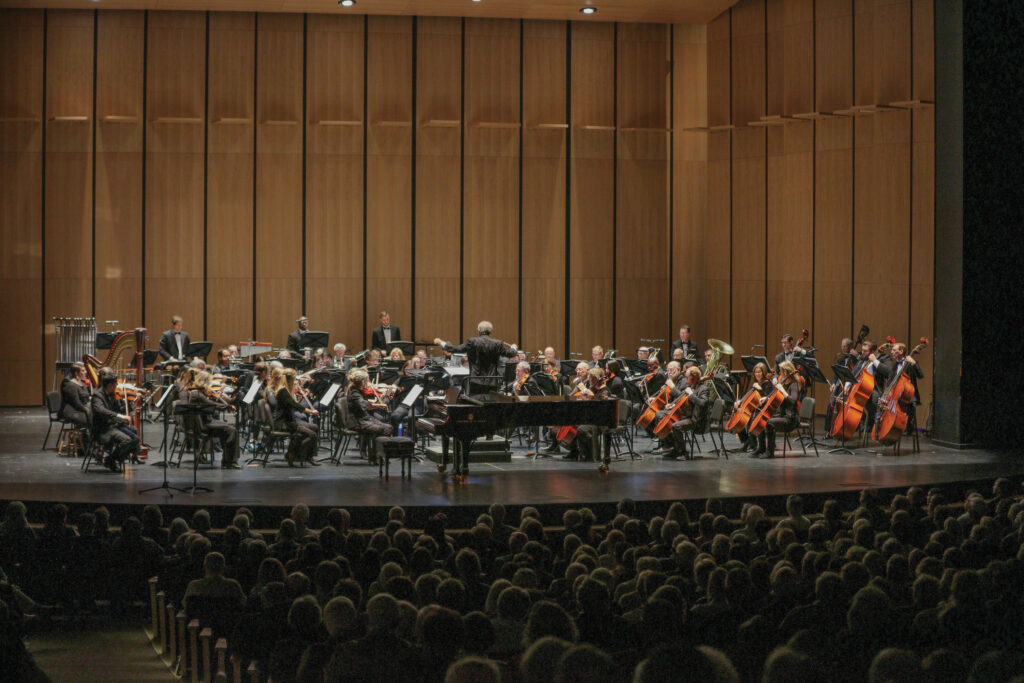 The WSO performs at the Wilson Center in downtown Wilmington. Photo courtesy of WSO

As the Wilmington Symphony Orchestra prepares to celebrate its 50th anniversary, looking back was not on Executive Director Liz Scanlon’s mind.

“Our focus is coming up strong for our 50th anniversary, but we’re not looking to the past,” says Scanlon. “We’re really focusing on creating a new symphony.”

Eager to put the challenges of the last year behind them, the symphony took advantage of the pandemic-imposed downtime by instituting new programs and concerts, as well as introducing new leaders for the upcoming season. Most notable is the addition of concertmaster Christine Maynard.

Maynard began as a student in the first class of the youth orchestra and now serves as the orchestra’s instrumental leader. She exemplifies what the symphony strives to do for the residents of the Wilmington community — cultivate a lifelong love of classical music.

Founded in 1971 “by people who just wanted to play together,” says Maynard, whose mother has been playing in the orchestra since 1983, the symphony, like most start-ups, initially struggled.

“The first concert stunk!” Scanlon says, recounting what one of the first members said. But there was little doubt that the fledgling group would persevere. Case in point: the member who gave that not-so-glowing first review is on the symphony board today.

Another significant milestone to be celebrated is the hiring of Steven Errante as conductor 35 years ago. Errante says performance and education enrich each other, so it’s no accident that the Wilmington Symphony Youth Orchestra began under his tutelage in 2001 and remains an integral part of the organization.

The youth orchestra, seen as a complement to area school orchestras, features programs such as the upcoming Rochestra, which will give students a chance to gain a deeper appreciation for classical music by combining it with contemporary music and instruments. Also new this year is the option for students to perform in chamber ensembles.

Scanlon sees the youth orchestra as much more than just performing.

“It boosts their confidence,” she says. “It creates leaders.”

Funded through grants, donations, fundraising events and ticket sales, the previously all-volunteer symphony is now able to offer a stipend to its performers.

The orchestra boasts a full roster of 72 players, all local.

“And when you actually have full sections, there’s more variety of music available to you,” Maynard continues.

For the last six years, the symphony has called the Wilson Center at Cape Fear Community College home, and it’s been a welcome change from the Kenan Auditorium on the University of North Carolina Wilmington campus because of its greater capacity and superior acoustics. “It’s a better experience on the whole,” Scanlon says.

The 50th anniversary concert is scheduled for Feb. 20, 2022, 50 years to the day of the first concert. Tickets went on sale in August. The orchestra will be highlighting its greatest hits of the last half-century and Errante’s favorites. A soirée with food and wine will be held before the concert, and there will be an opportunity to mix and mingle with the musicians afterward.

But Scanlon is quick to add that Wilmington Symphony concerts are not intended to be buttoned-up events.

The anniversary will be trumpeted during the entire 2021-22 season, which begins on Oct. 2 with a show featuring Paolo Gualdi on piano playing works by Bizet and Chopin. It includes the world premiere of Errante’s newly commissioned work, Azalea Suite, and Beethoven Lives Upstairs, where actors from Thalian Association Community Theatre will join the musicians on stage.