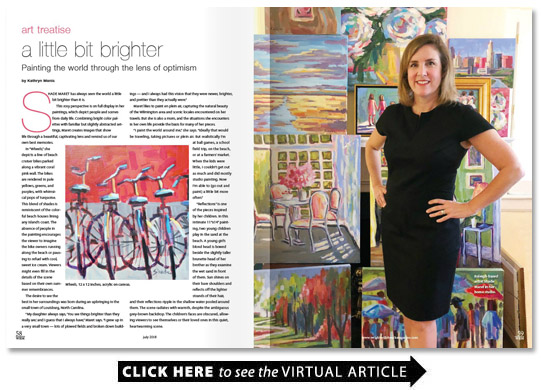 Shade Maret has always seen the world a little bit brighter than it is.

This rosy perspective is on full display in her paintings which depict people and scenes from daily life. Combining bright color palettes with familiar but slightly abstracted settings Maret creates images that show life through a beautiful captivating lens and remind us of our own best memories.

In “Wheels ” she depicts a line of beach cruiser bikes parked along a vibrant coral pink wall. The bikes are rendered in pale yellows greens and purples with whimsical pops of turquoise. This blend of shades is reminiscent of the colorful beach houses lining any island’s coast. The absence of people in the painting encourages the viewer to imagine the bike owners running along the beach or pausing to refuel with cool sweet ice cream. Viewers might even fill in the details of the scene based on their own summer remembrances.

The desire to see the best in her surroundings was born during an upbringing in the small town of Louisburg North Carolina.

“My daughter always says ‘You see things brighter than they really are ‘ and I guess that I always have ” Maret says. “I grew up in a very small town — lots of plowed fields and broken down buildings — and I always had this vision that they were newer brighter and prettier than they actually were.”

Maret likes to paint en plein air capturing the natural beauty of the Wilmington area and scenic locales encountered on her travels. But she is also a mom and the situations she encounters in her own life provide the basis for many of her pieces.

“I paint the world around me ” she says. “Ideally that would be traveling taking pictures or plein air. But realistically I’m at ball games a school field trip on the beach or at a farmers’ market. When the kids were little I couldn’t get out as much and did mostly studio painting. Now I’m able to [go out and paint] a little bit more often.”

“Reflections” is one of the pieces inspired by her children. In this intimate 11″x14″ painting two young children play in the sand at the beach. A young girl’s blond head is bowed beside the slightly taller brunette head of her brother as they examine the wet sand in front of them. Sun shines on their bare shoulders and reflects off the lighter strands of their hair and their reflections ripple in the shallow water pooled around them. The scene radiates with warmth despite the ambiguous grey-brown backdrop. The children’s faces are obscured allowing viewers to see themselves or their loved ones in this quiet heartwarming scene.

The positive memory of children playing at the beach is one that has a nostalgic appeal for Maret herself. She grew up visiting Wrightsville Beach every summer with her family and even worked a season at Robert’s Market.

“It was the place where we went to escape our small town and just get away for a while ” she explains.

Her fondness for the ocean and the Wrightsville area is seen in “Friends.” The painting — also composed on a small canvas requiring the viewer to lean in close — depicts three women in sun hats and bathing suits. The background is abstracted in Maret’s signature style and suggests the women are standing on the shore as waves break in front of them with their ankles disappearing under the incoming tide.

The central figure gently grabs the arm of the woman to her right for support as the group gazes inquisitively at the water and sand. The coral-colored underpainting peeks through Maret’s blue-green scene preventing the viewer from reading a “real” likeness in the image. Complemented by Maret’s linear loose brush strokes “Friends” invites its audience to reflect on our own treasured beach days with loved ones.

“I was one of those kids who drew [and] won the poster contests and pumpkin carving competitions and those early successes made it easier to return to it later ” she says. “My colors were even brighter then.”

She remembers mixing her own dye from pokeberries that grew in her yard. The berries yielded a dazzling shade of pink that she describes with a chuckle as “a color that is not of this world but somehow actually is.”

Despite the early promise she never planned to be an artist. Maret was working as a reporter for Bloomberg in Atlanta and was several months pregnant with her son when she and her husband moved to the Triangle area.

“I had to quit my job but I never really planned to ” she says.

The ultimate push to revisit her passion for visual art came from a friend who was visiting the family’s new home. Maret had painted a few things for her kids’ rooms and for herself but didn’t consider it to be anything more than a hobby. The friend asked if she’d painted a piece that was hanging in the living room. She hadn’t but Maret said the question made her ask herself “Why am I not painting?”

While painting ultimately won out over writing Maret maintains that her writing days positively influenced her art career.

“Art really gave birth to writing especially if we think back to examples like the Lascaux cave drawings ” she says. “And there are so many writers who are also painters now and in history. But even at a basic level a writing background is a solid foundation because it definitely prepares you to meet a deadline.”

Maret’s early propensity for bright shades continues in pieces like “Rainy Day.” This 20″ x 16″ composition depicts a group of figures sheltering under umbrellas as they walk through a summer downpour. The group moves along a path flanked by tall dark trees. Their umbrellas are rendered in shades of pink and blue which are mirrored in their clothing.

Though Maret does not show the rain itself the scene has the appearance of light reflecting on a wet surface. The solid path and the tops of the umbrellas are highlighted with big swaths of yellow and other pastel shades. The long geometric brushstrokes and elongated paint sections making up the background recall water running down a wall or window. The effect is similar to looking through a camera lens when it’s raining; the entire scene has a glow and a hazy thickness to it.

Her signature style evolved immediately and organically after she returned to painting and includes loose brushstrokes textural application of acrylic paint plein air painting and varying canvas sizes. She often works in series or phases that follow a theme canvas size or color scheme.

Maret typically focuses on one painting at a time. This allows her to move quickly — she’s been dubbed a “speed painter” by many friends — while still enabling her to revisit finished pieces with the perspective of some time and distance. Her pieces recall both impressionistic and expressionistic styles in their attention to variation in light and color and their palpable relatable emotion.

This unique combination of features is motivated by an interest in design.

“My work is differentiated by color and design elements ” she says. “It blends realism with abstraction and a little bit of impressionism — some people even call it expressionistic. I do have a little bit more of a linear style than typical plein air. My work started off like that once I started using acrylics; it’s always been my style and I can’t really tell you why. I do really love the design elements and switching the components around to read better as a whole.”

Maret hopes that others will enjoy her work in some way but she doesn’t necessarily think about cultivating an audience as a big part of her creative process.

“I hope they get the same feelings that I do from it but I don’t think that’s necessarily what does or should happen ” she says. “I don’t really think about it that way; I’ll never know what others think. I think of it as trying to reveal what others are not able to see.”

Big and small Maret’s paintings reveal something about the everyday that we may not otherwise notice or appreciate — a subtle gesture of trust and affection between friends the special bond between siblings a picturesque scene created by an inconvenient storm. Maret’s compositions are unique in their appearance but evocative of universal and moving themes.