A Lesson in Nutrition: Healthy Food Can Be Tasty Food 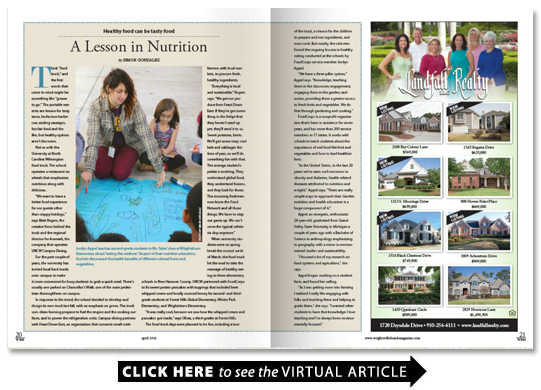 Think “food truck ” and the first words that come to mind might be something like “grease to go.” The portable eateries are known for tasty tacos bodacious barbecue sizzling sausages fun fair food and the like but healthy options aren’t the norm.

Not so with the University at North Carolina Wilmington food truck. The school operates a restaurant on wheels that emphasizes nutritious along with delicious.

“We want to have a better food experience for our guests other than crappy hotdogs ” says Matt Rogers the creative force behind the truck and the regional director for Aramark the company that operates UNCW Campus Dining.

For the past couple of years the university has invited local food trucks onto campus to make it more convenient for busy students to grab a quick meal. There’s usually one parked on Chancellor’s Walk one of the main pedestrian thoroughfares on campus.

In response to the trend the school decided to develop and design its own truck last fall with an emphasis on green. The truck uses clean-burning propane to fuel the engine and the cooking surfaces and to power the refrigeration units. Campus dining partners with Feast Down East an organization that connects small-scale farmers with local markets to procure fresh healthy ingredients.

“Everything is local and sustainable ” Rogers says. “We get our produce from Feast Down East. If they’ve got something in the fridge that they haven’t used up yet they’ll send it to us. Sweet potatoes beets. We’ll get some crazy cool kale and cabbages this time of year so we’ll do something fun with that. The average student’s palate is evolving. They understand global food they understand fusions and they look for those. The incoming freshmen now know the Food Network and all those things. We have to step our game up. We can’t serve the typical cafeteria slop anymore.”

When university students were on spring break the second week of March the food truck hit the road to take the message of healthy eating to three elementary schools in New Hanover County. UNCW partnered with FoodCorps to fix sweet potato pancakes with toppings that included beet whipped cream and locally sourced honey for second- and third-grade students at Forest Hills Global Elementary Winter Park Elementary and Wrightsboro Elementary.

“It was really cool because we saw how the whipped cream and pancakes got made ” says Olivia a third-grader at Forest Hills.

The food truck days were planned to be fun including a tour of the truck a chance for the children to prepare and mix ingredients and even cook. But mostly the visit reinforced the ongoing lessons in healthy eating conducted at the schools by FoodCorps service member Jordyn Appel.

“We have a three-pillar system ” Appel says. “Knowledge teaching them in the classroom; engagement engaging them in the garden; and access providing them a greater access to fresh fruits and vegetables. We do that through gardening and cooking.”

FoodCorps is a nonprofit organization that’s been in existence for seven years and has more than 200 service members in 17 states. It works with schools to teach students about the importance of real food like fruit and vegetables and how to lead healthier lives.

“In the United States in the last 20 years we’ve seen such increases in obesity and diabetes health-related diseases attributed to nutrition and weight ” Appel says. “There are really simple ways to approach that. Garden nutrition and health education is a huge component of it.”

Appel an energetic enthusiastic 24-year-old graduated from Grand Valley State University in Michigan a couple of years ago with a Bachelor of Science in anthropology emphasizing in geography with a minor in environmental studies and sustainability.

“I focused a lot of my research on food systems and agriculture ” she says.

Appel began working on a student farm and found her calling.

“As I was getting more into farming I realized I really like engaging with folks and teaching them and helping to guide them ” she says. “I wanted other students to have that knowledge. I love teaching and I’ve always been environmentally focused.”

She learned about FoodCorps while working on the farm applied to be a service member and was assigned to Wilmington. As soon as she arrived she began to see the need for nutrition education.

“It’s pretty vital ” she says. “One of my schools recently did a study and they found there’s a very high rate of children coming into kindergarten already at risk for obesity and diabetes. A 5-year-old shouldn’t be at risk for obesity.”

Malnutrition is also a concern at the three schools designed as Title I because of high poverty rates.

The problem isn’t necessarily a lack of food. It’s a lack of nutritious food and a lack of knowledge in identifying good food and knowing where it comes from.

That’s if their local store even sells lettuce. Some students live in areas classified as “food deserts ” meaning there isn’t a fully stocked grocery store within one mile.

“If you get into the core of Wilmington you are in the food desert ” Rogers says. “The corner store is the only place that sells anything. Ask a kid that’s 6 or 7 where food comes from and they might say McDonald’s. They don’t know about farms and growing food.”

Appel teaches at the three schools once a week. She has explained the life cycle of a plant and helped cultivate vegetable gardens at each facility. She talks about healthy cooking and provides recipes for delicacies like kale chips. She tells the children why fruits and vegetables are important.

On a breezy sunny March afternoon at Wrightsboro Ms. Salas’ second-grade class gathers outside by the school’s greenhouse and a raised plant bed to learn about “eating the rainbow.”

Appel divides them up and gives each group a different colored fruit or vegetable. The assignment is to do research from cards she provided and report on the health benefits of food in that color group. The findings are recorded on a life-size poster made from the outline of one of the students.

The hope is that the young students will become ambassadors for nutrition taking the message of healthy eating home to their brothers and sisters parents even grandparents.

“It’ll come back later on in conversation ” Salas says. “What they enjoy doing is going home and talking about it.”