A Home for the Holidays 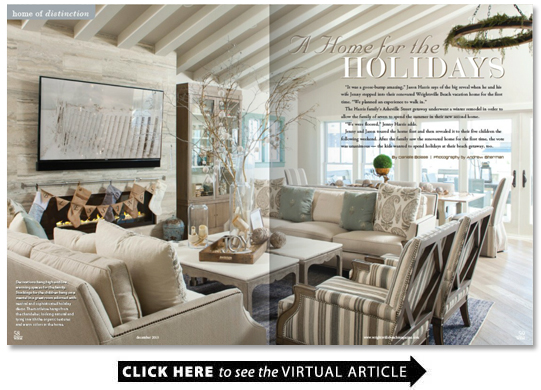 “It was a goose-bump amazing ” Jason Harris says of the big reveal when he and his wife Jenny stepped into their renovated Wrightsville Beach vacation home for the first time. “We planned an experience to walk in.”

The Harris family’s Asheville Street getaway underwent a winter remodel in order to allow the family of seven to spend the summer in their new second home.

“We were floored ” Jenny Harris adds.

Jenny and Jason toured the home first and then revealed it to their five children the following weekend. After the family saw the renovated home for the first time the vote was unanimous — the kids wanted to spend holidays at their beach getaway too.

Jenny and Jason purchased the house about one year ago and wanted to begin the remodel immediately to be ready in time for summer vacation. From their primary home in High Point North Carolina they hired local contractor Chambliss & Rabil and interior designer Anne-Marie Barton who operates AMB Design in Salt Lake City Utah to complete the interior overhaul. The recrafted space would be presented to the clients in a big reveal showing them a top-to-bottom turnkey design presentation complete with hors d’oeuvres candlelight and music.

“They were waiting for my text saying it’s time ” Barton says. “The most satisfying part of our job is the minute the client walks in. We feel we haven’t accomplished our goal if the client doesn’t have a reaction. If we get that reaction we are happy. This one was extra special because they wanted a getaway and that was exciting and kept us going throughout the remodel.”

Jenny and Jason grew up in High Point and have been together since college. Five children later it was becoming expensive and logistically difficult to travel for vacations. It was time for a permanent beach getaway and Wrightsville Beach was the ideal place.

The family found a house with a floor plan that was the perfect fit including all six bedrooms they needed. After functioning as a rental for several years the home needed to be gutted.

Jenny’s father met Norman Chambliss III owner and COO of Chambliss & Rabil at a football game and referred him to Jenny and Jason. They interviewed Chambliss and his son Yates and thought they were the best fit for the renovation project. The homeowners worked closely with the job site supervisor Eric Tracey who was at the house every day implementing and contributing to the creative vision.

“Eric is a solver ” Jason says. “If there was a problem or we had an idea he would jump all over it and you could see the wheels spinning.”

The homeowners only made four visits during the remodel process — all strategically planned by Barton.

“I fell in love with how she approached design ” Jason says. “We wanted someone who could be committed to this. She said ‘We have a formula for this and it includes four site visits.'”

Barton explains the first visit is to create a vision before the deconstruction occurs to decipher the scope and promise of the home.

“We want to capture the essence of the home ” she says. “Then we identify what will stay and what will go completely drawing out the spaces. We have our secondary meeting with a full table of samples and plans to see if the clients connect or disconnect with anything on the table. It’s touch and feel — very dynamic and exciting for the client. They get the dream right then. We leave with a basket full of yeses and take it back to the studio.”

Since this was a long-distance project Barton created a design binder that was a resource for the builder and subcontractors. It included inspirational images CAD drawings and all specifications including the ceiling design in the master bedroom.

“If a subcontractor was here and had a question they could flip through and find it in the book ” Jason says.

The final trip for the homeowners was to see the finished product and experience the big reveal.

“We asked if we could do a gracious living package — beyond the cabinetry finishes and furniture ” Barton says. “We wanted the warmth in place the minute they walked in. We planned food to be on the counter towels to be folded so they could start living right then. What happens when we work remotely is we inevitably have a concoction of an army. All of this while we are installing the furniture.”

An expert in furniture himself Jason is the co-owner and executive vice president of the High Point-based Furnitureland South known as the largest furniture store in the world with more than 1 million square feet of showroom space. He also is founder president and CEO of The Design Network (TDN) an interactive broadband website featuring videos and original series about home design and furnishing featured in the October 2015 issue of WBM.

Jason met Barton several years ago after providing furniture for one of her projects — a commercial for CBS sportscaster Jim Nantz’s penthouse in Colorado. When Jason decided to feature his own renovation on TDN Barton’s combination of design aesthetic and on-screen presence made her the perfect choice as both a designer and host.

“After [the commercial] I started the network and reached out to her ” Jason says. “She agreed to produce a couple of series and I got to know her aesthetic — organic modern.”

Barton says the term modern in this case does not mean high tech.

“I want the materials to reveal a texture that is believable and natural ” Barton says. “I think it comes from within. It’s a drive to create order and simplicity.”

With a design driven by textures and warm neutrals the main living spaces are open to each other and united by a vaulted ceiling. Two light fixtures hang from a contrasting center beam while the dimension of the beam embraces the dynamic. Jason says the idea for the light fixtures was to have them feed into something more substantial and have it connect with the floor.

“The vaulted ceiling has to connect all those corners different bevels and pitches. It was a challenge and I love a challenge ” Eric Tracey says.

The family’s High Point home has more of a lodge feel with darker colors. The couple was hungry for something different: light coastal colors and consistencies. The natural white oak floors show driftwood undertones that were then tied into the trim work and furniture.

Ample main living room seating accommodates the family of seven. Two sofas are placed facing each other in front of the fireplace the large dining area is back- dropped by the ocean view and bar stools line the kitchen island. Suspended floating shelves hang from metal cables as an accent to the kitchen.

“Anne-Marie likes to design kitchens that are self-serving and make it available to guests ” Jenny says.

A sitting area in the master bedroom leads up to a raised level for the bed and offers a spectacular ocean view. Accent beams peak toward the center where purposeful lighting hangs down.

The main floor also includes a guest suite commandeered by the family’s youngest child and a back staircase to a widow’s watch above. This rooftop balcony overlooks ocean to sound with a firepit and music piped from an integrated sound system beneath the benches.

The ground floor welcomes the children with their own family room kitchen eating area and four bedrooms. A large sectional grounds the family room while the cocktail table offers pullout ottomans that tuck in underneath.

“This house is for our family. We want it to be a family getaway since it’s hard for us to travel with seven people. This makes it easy ” Jason says.

The Harrises will continue to enjoy Wrightsville Beach weekends summer months and the holidays. The Christmas decorations are up and the family of seven is ready to celebrate the holidays in their new home.