A Home Away for the Holidays 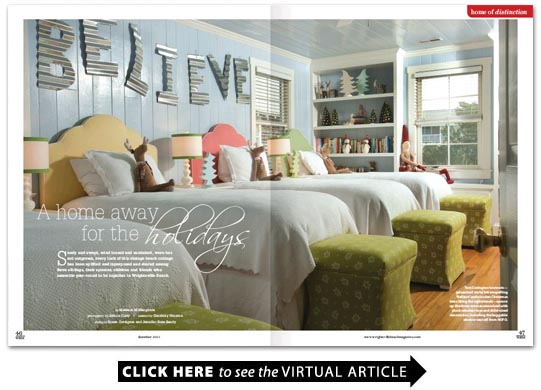 Sandy and swept wind tossed and sunbaked worn but not outgrown every inch of this vintage beach cottage has been uplifted and repurposed and shared among three siblings their spouses children and friends who assemble year-round to be together in Wrightsville Beach.

Though some of the rooms are small the house just rambles around has lots of space and lives really well. Every part gets used ” explains Alison Davis Thorp.

She is one of three Davis siblings who own the vintage Wrightsville Beach cottage on North Lumina Avenue between the bridges on Banks Channel also affectionately known as “the sound.”

“The whole point of the cottage was so that we could all be together ” Alison says. Scattered from North Carolina to Texas this is where the children of J. Holmes Davis IIIsisters Alison and Ashley and brother J. Holmes Davis IVshare the cottage retreat year-round with their spouses their children and friends.

“Its almost like a second home to us ” Alison says. Shes the spokesperson for the group.

Alison and her husband Jimbo live in Charlotte with their children Peyton 19 and James 17. Ashley Davis Burlingame and husband John also live in Charlotte with Marshall 18 Mary Corbin 16 and Hannah 12. Originally from Charlotte and Raleigh Holmes and wife Cammy now travel from Dallas Texas with their three childrenHolmes 13 Eliza 10 and Marguerite 6perpetuating a family tradition of togetherness in Wrightsville Beach.

Their father was the only one of three brothers to leave the Wilmington and Wrightsville area to rear his family elsewhere. For 20 years he rented a summer cottage on the sound to be near his brothers Peter Davis and Michael Davis who owned their own cottages. After his death his children continued to rent the home. For decades the Davis siblings from Charlotte have been coming down to Wrightsville Beach.

“We spent so much time in Wilmington and Wrightsville with our grandparents uncles cousins and extended family ” Alison explains.

“We had always known that if we were going to buy something we really wanted to be in that area of the beach between the bridges on the sound side. We had always loved being within walking distance to Roberts and the restaurants.” With their mom just a few doors away and Uncle Peter even closer the Davis siblings have lots of friends and family nearby.

“We talked about it for a lot of years before we bought the house ” Alison says. “Its really a way to keep the family together.”

Already tucked into the fabric of the historic community that developed after the Great Fire in 1934 the Davis Cottage was built in 1941.

With three master suites that the three couples rotate a four-bed dorm room upstairs for the younger girls and a downstairs suite and bunk room for the older girls and all of the boys the Davis clansix adults and eight children ages six to 20can occupy the stately shingled cottage all at once.

“We have a bed for everybody ” Alison says. “All families can be there comfortably we really enjoy each other.”

The living room is used all of the time but a favorite time to be there is in the morning.

“We love hanging out drinking coffee reading the paperit truly is a fun part of the day there are always funny stories being told kids are coming in and out breakfast is being served and plans are being made. We purposely did not put a TV in the living room so that we could focus on each other ” Alison says.

The location and the porches were one of the first things that attracted the family to the house.

“They are truly an extension of the house and we use them constantly hanging out on those porches in the rocking chairs or hammock. I would say that the front porch with the swing is a favorite ” Alison says.

The house they bought in 2007 belonged to Harold Chappell and his wife who lived on the sound year-round. The interior wall and ceiling paneling was dark the furnishings antique. Of that dcor the paneling crown molding an authentic telephone niche and hardwood floors remain.

In the bedrooms she added vintage white chests of drawers retooled with era hardware and drawer pulls. An array of eclectic crystal doorknobs mounted on beveled wood slabs function like hooks and are part of the look.

In one of the three master suites Covington designed and built an elevated pie safe with lattice doors to disguise an electronic mlange. In the same room she repurposed a traditional breakfront buffet now a bureau.

Covington had already fabricated the dining room table a distressed turquoise frame with a galvanized metal surface before she met her clients. With that starting point she says it was not hard at all to convince them to use shades of turquoise throughout the dining area as the primary wall tone.

A custom corner cupboard for displaying dishes and trays that match a built-in hutch which dates to the homes 1940s origins is another of Covingtons inventions. To open up the space that also functions as a passage from the kitchen into the living room she moved the chandelier several feet off center and painted it white to match a collection of rattan dining chairs.

As old-fashioned as it may sound in the handful of years since they bought the cottage the Davis siblings have picked up where they left off resuming the Wrightsville Beach traditions entrenched in their memories since childhood.

Those traditions surround good company good food and being on the water. Like brother-in-law John Burlingames summer shrimp and crab boils. Burlingame sets the table and prepares the feast of fresh shrimp and crabmeat tossed with corn on the cob new potatoes and sausage then serves everyone on the dock.

On the Fourth of July they pack a picnic lower the boat and cruise north toward Shell Island or Richs Inlet.

“We use the boat a lot skiing tubing wakeboarding crabbing. We also use the dock a ton ” Alison says.

The kids swim in the channel; the dogs romp on the sandy beach; everyone comes and goes through the ground level den stocked with beach towels bathing suits and sunscreen.

Alison says the dock gazebo is a great hideout especially when the sun has gotten a little too hot. “Its a nice place to go for a little shade. We go to the beach too but use that dock all the time.”

For Thanksgiving they all spend a couple of days with the extended Davis family at a family place on the Cape Fear River. Alison adds “The day after Thanksgiving we move to the beach cottage for the flotilla weekend!”

For the New Year they usually arrive a few days early with houseguests in tow. By then Covington who also doubles as the familys property manager and provisioner has stocked the refrigerators the pantry and the bedroom suites with staples. All thats missing is a trip to Motts Channel Seafood for shrimp and grits supplies.

The family that doesnt skip an Easter Sunday a Memorial or Labor Day weekend or the famed North Carolina Holiday Flotilla observes every Thanksgiving weekend and cherishes every holiday at the beach but one Christmas.

That may change when they see what theyre missing.