A Guild of Their Own 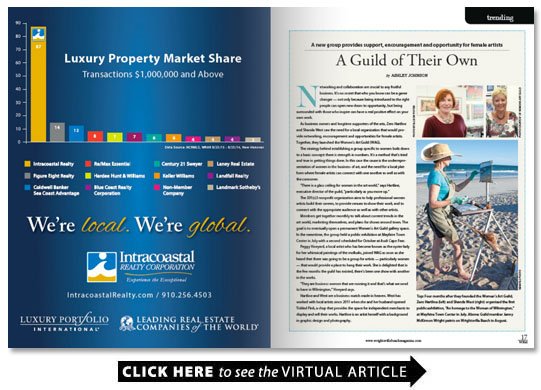 Networking and collaboration are crucial to any fruitful business. It’s no secret that who you know can be a game changer — not only because being introduced to the right people can open new doors to opportunity but being surrounded with those who inspire can have a real positive effect on your own work.

As business owners and longtime supporters of the arts Zero Hartline and Shanda West saw the need for a local organization that would provide networking encouragement and opportunities for female artists. Together they launched the Women’s Art Guild (WAG).

The strategy behind establishing a group specific to women boils down to a basic concept: there is strength in numbers. It’s a method that’s tried and true in getting things done. In this case the cause is the underrepresentation of women in the business of art and the need for a local platform where female artists can connect with one another as well as with the consumer.

“There is a glass ceiling for women in the art world ” says Hartline executive director of the guild “particularly as you move up.”

The 501(c)3 nonprofit organization aims to help professional women artists build their careers to provide venues to show their work and to connect with the appropriate audience as well as with other artists.

Members get together monthly to talk about current trends in the art world marketing themselves and plans for shows around town. The goal is to eventually open a permanent Women’s Art Guild gallery space. In the meantime the group held a public exhibition at Mayfaire Town Center in July with a second scheduled for October at Audi Cape Fear.

Peggy Vineyard a local artist who has become known as the oyster lady for her whimsical paintings of the mollusks joined WAG as soon as she heard that there was going to be a group for artists — particularly women — that would provide a place to hang their work. She is delighted that in the few months the guild has existed there’s been one show with another in the works.

“They are business women that are running it and that’s what we need to have in Wilmington ” Vineyard says.

Hartline and West are a business match made in heaven. West has worked with local artists since 2011 when she and her husband opened Tickled Pink a shop that provides the space for independent merchants to display and sell their works. Hartline is an artist herself with a background in graphic design and photography.

A transplant from San Francisco where she and her husband owned an advertising agency Hartline came to Wilmington ready to embrace her creative side full time. Her home is littered with paints canvases and new works in progress. When she arrived in the Port City Hartline started searching for a way to get involved with other local women pursuing a career in art and came up short.

She began researching cities that were already doing the type of thing she was looking for and doing it well. She discovered the concept of a guild a group that was exclusively for established professional artists.

WAG has a rigorous application process. Interested artists must go through a juried application before becoming a member. They’re required to have a portfolio.

West and Hartline came up with the idea but they knew they couldn’t begin this kind of undertaking on their own.

“We sat down with other local artists in town before we started ” West says. “It was important to us that we hear from them.”

The more they talked with local artists the more they realized that Wilmington has an abundance of talented women just waiting for an opportunity to be noticed.

“I think Wilmington has the potential to be an Asheville by the sea ” Hartline says.

Apparently they weren’t the only ones who felt a need for this kind of pairing in the local women’s art community. WAG drew in 25 artists off the bat when it formed in March. It grew to 35 members by the time its first show “A Homage to the Women of Wilmington ” in July.

The show was a success. It attracted a large crowd of supporters and buyers. Vineyard sold four pieces at the show.

“They are so organized. They know exactly what they’re doing ” Vineyard says about West and Hartline.

Vineyard a former educator then successful real estate agent has always set aside time to express herself creatively. But it wasn’t until the last few years that she brought her talent as a painter to the forefront. She uses watercolor pencil acrylic and collage to tell her own story of the natural world around her.

The members of the Women’s Art Guild range in mediums from all kinds of paint photography 2-D 3-D clay encaustic and fabric art.

Betsy Parker who has been working in stoneware porcelain clay and terracotta for more than 30 years joined the guild as a way to reach a wider audience and also to move away from the preconception that 3-D artists are “craftspeople” rather than artists.

“Opportunities to present 3-D work in the same venue and within the same parameters as 2-D can expand folks’ understanding and appreciation of 3-D pieces ” she says.

Parker is appreciative of the enthusiasm of the leadership and fellow members of WAG as well as the friendships made collaboration and the surge of ideas that have come from the organization. For her all of these aspects are healthy for increased creativity business growth and personal satisfaction.

Katherine Clark a young 30-something photographer joined the Women’s Art Guild as a way to get her fine art photography before the public. As a commercial photographer Clark has an impressive resume boasting names like Old Navy Whole Foods and The Washington Times along with a handful of local businesses and publications.

While she’s done well her work in commercial photography has left Clark on the outside of the local art circle. Joining WAG has given her an opportunity to make connections.

“Flying solo is tough when you don’t know where to go or who to contact so the guild has given me an opportunity where I otherwise would not have one ” she says. “Working with these ladies has introduced me to so many artists and galleries. Plus some of these women have become very dear friends of mine.”

The opportunity to meet other artists also drew Elizabeth de Sherbinin who transitioned to Wilmington from Raleigh. (See full story about de Sherbinin on page 62.) De Sherbinin primarily paints landscapes done in oil with palette knife or brush. She joined after exhibiting in the Mayfaire show.

“This is a great way to get to know local artists and be part of the local art community ” de Sherbinin says.

The next show “Painting the Blues ” a partnership with the Pretty in Pink Foundation is scheduled to take place Oct. 22-23 at Audi Cape Fear. This show will be on a larger scale. A ticket purchase includes a meal prepared by a celebrity chef cocktails and live jazz.

The blues theme doesn’t only refer to the jazz. Hartline is always thinking business smart. In planning for the October show she reached out to interior designers in the area and asked them what’s in.

“A lot of people want to consult with their interior designer before committing to purchasing a piece of art ” Hartline says.

The answer she got was “blue ” so that’s what the work will cater to.

The venue choice for the first two shows was intentional. There is a lack of galleries away from downtown and WAG is targeting midtown and the Wrightsville area. Lumina Station has been mentioned for a permanent gallery.

“There is a lot of opportunity for artists here in this area ” Hartline says.

WAG hopes to eventually provide mentoring by offering apprenticeships and partnering with high schools and colleges for joint shows.

The guild also exists to close the gap that remains between men and women in all aspects of professional art such as gallery representation and solo shows.

There is evidence — albeit small steps — toward equality in artist representation. An article published by Art News last year stated that from 2000-2014 the Guggenheim in New York increased the number of solo shows by a woman from zilch to 14 percent. At the Museum of Modern Art the count of work by women was only 16 of the total 410 pieces on display in 2004 when it opened its new building. In 2015 that number had increased from 4 percent to 7.

Those numbers still might seem grim but there are many large and small initiatives within cities and communities that serve as think tanks for professional women visual artists and as vehicles to help take their careers to the next step. The Women’s Art Guild hopes to fill that niche in Wilmington.

“It is a lot of work and I don’t know how they do it ” Vineyard says “but I’m thrilled with it.”