A Full House for Summer 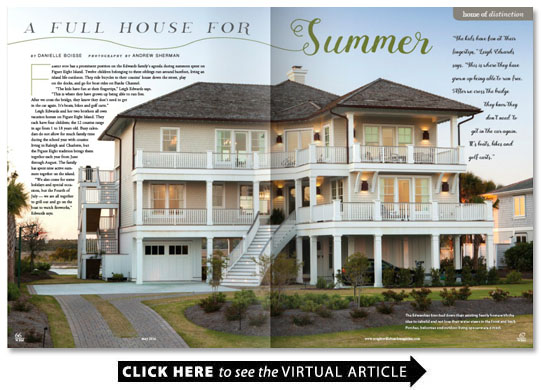 Family fun has a prominent position on the Edwards family’s agenda during summers spent on Figure Eight Island. Twelve children belonging to three siblings run around barefoot living an island life outdoors. They ride bicycles to their cousins’ house down the street play on the docks and go for boat rides on Banks Channel.

“The kids have fun at their fingertips ” Leigh Edwards says. “This is where they have grown up being able to run free. After we cross the bridge they know they don’t need to get in the car again. It’s boats bikes and golf carts.”

Leigh Edwards and her two brothers all own vacation homes on Figure Eight Island. They each have four children; the 12 cousins range in age from 1 to 18 years old. Busy calendars do not allow for much family time during the school year with cousins living in Raleigh and Charlotte but the Figure Eight tradition brings them together each year from June through August. The family has spent nine active summers together on the island.

“We also come for some holidays and special occasions but the Fourth of July — we are all together to grill out and go on the boat to watch fireworks ” Edwards says.

Leigh and Rob Edwards bought a house with Leigh’s brother nine years ago and then her brother decided to build his own house with builder Jimmy Burris of J.R. Burris Construction.

The Edwardses were at a crossroads — the once-shared house needed to be updated but they didn’t want to move and lose their location or views. They decided to knock the house down and build new with Burris now a family friend.

“I have built for a bunch of people with four kids and that’s because the island is family oriented ” Burris says. “The main reason they come is for the quality of life. It has beautiful beaches that aren’t crowded. There are no commercial buildings just bicycles and golf carts.”

The family-oriented aspect put a firm timetable on the construction project. The Edwardses wanted to be in their new home in time for warm weather.

“We built the house in record time. We had to finish in time for summer ” Burris says.

Burris knocked down the old house in August of 2014 and completed the new one by the following June.

“We managed to not miss a summer ” Leigh Edwards says.

Interior designer Tina Williamson of T Williamson Interiors helped the Edwardses before construction and finished off the house with complementary soft goods that warm each space with color-coordinating fabrics.

“Crisp whites were her base neutral. Leigh wanted a clean and crisp palette so we used bright white with one color in each of the rooms ” Williamson says. “That crispness in the house is what sets it apart.”

White walls throughout the house offer a clean aesthetic and an opportunity for texture in the floors. Wide plank white oak floors that were painted white and then sanded over for refinishing achieve a coastal look. A vaulted tongue-and-groove ceiling with three beams adds height and dimension to the interior while bringing focus to the view of the water activity out back.

The Edwards family craved an open and shared great room space that was meant for fellowship. It includes the kitchen with an island designed to be an additional gathering place.

“We wanted the kitchen island to be a welcoming place to plop down and if someone was in the kitchen they didn’t feel like they were missing out on anything ” Leigh Edwards says.

Williamson agrees that the island adds to the warm family-oriented theme.

“The island says ‘here comes the food.’ I have watched Leigh stand at the island making and handing out sandwiches. That’s just what kind of house this is ” she says.

With views of Banks Channel in the back of the house and a pond in the front the Edwardses can see the water from several porches and the ground floor loggia.

“We can look out on our upstairs deck and see far in each direction including Wrightsville ” Edwards says. “We like sitting outside more than we like sitting inside.”

The open air space on the ground level includes a picnic table that seats about 20 people while a Ping-Pong table sofas and a television give the children a place to be in the shade and not go inside sandy and wet. They frequently use the two outdoor showers. Tabby concrete spans the area. The top floor dining area is used for family dinners and off-season entertaining for adults.

With a style that could be described as classic mixed with Southern coastal rattan motifs and pops of color reflect a Palm Beach influence. Accent colors such as cerulean blue coral navy and yellow are tastefully dispersed through the house while patterned wallpaper in the bathrooms and grasscloth walls on the kids’ floor add to the coastal flavor.

The house was designed to be kid-centered. The Edwardses’ three sons have bedrooms on the ground level — or kids’ floor — and their daughter has a bedroom on the main level.

“In the redesign they wanted more views more outdoor spaces and more room for the children and their friends ” Williamson says. “Each of the bedrooms has an extra bed for a friend.”

“On the kids’ floor the pool table was a must. It was a mandatory request from the children ”

Williamson says. “We used a lot of pieces they already had and then we added grasscloth to the walls because we needed something that would hold it all together.”

Details in finishes such as chrome rattan wicker and sisal create an eclectic mix stylish and well-equipped for 12 kids plus their family and friends.

“We knew we were going to have a full house but we wanted it to work well with entertaining for the kids their friends and our friends ” Edwards says. “My kids live for being at Figure Eight in the summer — it’s their fantasyland. They boat wakeboard wake surf fish paddleboard kayak and play on the docks.”

For these dozen cousins once they cross the bridge to Figure Eight Island barefoot summers and freedom create a strong family tradition.