A Foundation of Hope for Wounded Heroes 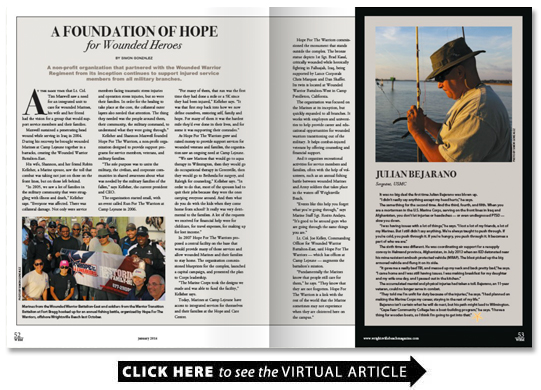 A non-profit organization that partnered with the Wounded Warrior Regiment from its inception continues to support injured service members from all military branches.

At the same time that Lt. Col. Tim Maxwell saw a need for an integrated unit to care for wounded Marines his wife and her friend had the vision for a group that would support service members and their families.

Maxwell sustained a penetrating head wound while serving in Iraq in 2004. During his recovery he brought wounded Marines at Camp Lejeune together in a barracks creating the Wounded Warrior Battalion-East.

His wife Shannon and her friend Robin Kelleher a Marine spouse saw the toll that combat was taking not just on those on the front lines but on those left behind.

“In 2005 we saw a lot of families in the military community that were struggling with illness and death ” Kelleher says. “Everyone was affected. There was collateral damage. Not only were service members facing traumatic stress injuries and operation stress injuries but so were their families. In order for the healing to take place at the core the collateral outer layers also needed that attention. The thing they needed was the people around them their community the military command to understand what they were going through.”

“The sole purpose was to unite the military the civilian and corporate communities in shared awareness about what was needed by the military families of the fallen ” says Kelleher the current president and CEO.

The organization started small with an event called Run For The Warriors at Camp Lejeune in 2006.

“For many of them that run was the first time they had done a mile or a 5K since they had been injured ” Kelleher says. “It was that first step back into how we now define ourselves restoring self family and hope. For many of them it was the hardest mile they’d ever done in their lives and for some it was supporting their comrades.”

As Hope For The Warriors grew and raised money to provide support services for wounded veterans and families the organization saw an ongoing need at Camp Lejeune.

“We saw Marines that would go to aqua therapy in Wilmington then they would go do occupational therapy in Greenville then they would go to Bethesda for surgery and Raleigh for counseling ” Kelleher says. “In order to do that most of the spouses had to quit their jobs because they were the ones carrying everyone around. And then what do you do with the kids when they come home from school? It really was very detrimental to the families. A lot of the requests we received for financial help were for childcare for travel expenses for making up for lost income.”

In 2007 Hope For The Warriors proposed a central facility on the base that would provide many of those services and allow wounded Marines and their families to stay home. The organization commissioned blueprints for the complex launched a capital campaign and presented the plan to Corps leadership.

“The Marine Corps took the designs we made and was able to fund the facility ” Kelleher says.

Today Marines at Camp Lejeune have access to integrated services for themselves and their families at the Hope and Care Center.

Hope For The Warriors commissioned the monument that stands outside the complex. The bronze statue depicts 1st Sgt. Brad Kasal critically wounded while heroically fighting in Falluajah Iraq being supported by Lance Corporals Chris Marquez and Dan Shaffer. Its twin is located at Wounded Warrior Battalion-West in Camp Pendleton California.

The organization was focused on the Marines at its inception but quickly expanded to all branches. It works with employers and universities to help provide career and educational opportunities for wounded warriors transitioning out of the military. It helps combat-injured veterans by offering counseling and financial support.

And it organizes recreational activities for service members and families often with the help of volunteers such as an annual fishing battle between wounded Marines and Army soldiers that takes place in the waters off Wrightsville Beach.

“Events like this help you forget what you’re going through ” says Marine Staff Sgt. Rosito Andaya. “It’s good to be around guys who are going through the same things you are.”

“Fundamentally the Marines know that people still care for them ” he says. “They know that they are not forgotten. Hope For The Warriors is a link with the rest of the world that the Marine sometimes may not experience when they are cloistered here on the campus.”