A Flair for Southern Fare

BY Sara Leary and Jordan Smith 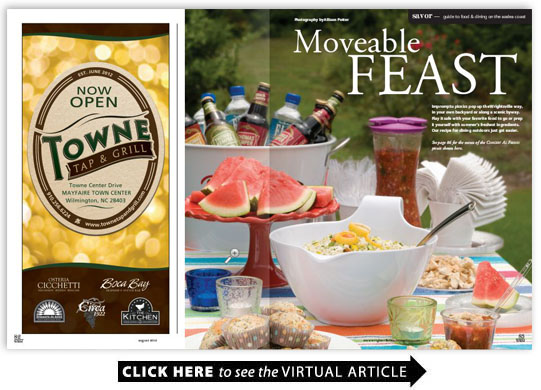 Call it Carolina Boil Shrimp Boil or by its authentic name: Frogmore Stew this Low Country one-pot seafood dish is often served outdoors in restaurants and on social occasions on tables sometimes covered in newspapers.

“Its one of those feel-good dishes ” Bain says. “There are a million different variations but what I like to do is start with small potatoes boiling water and a pinch of salt. A lot of people add Old Bay or hot peppers for seasoning. Youll hear of all different flavor variations. Each family has their own unique way of doing it ” he explains.

The dish is simple enough with only five key ingredients potatoes corn onion sausage and shrimp
although Bain admits to having tried different types of seafood to spice things up a bit.

Because the history of preparing seafood dates back to the beginning of time thousands of chefs professional and otherwise have claimed to be the first to discover a new food technique.

The case is no different when dealing with a Low Country Boil. Some claim it originated in New England. Others like cookbook author Jean Anderson tie it to the South saying it emerged from the marshes of a small South Carolina town.

The community of Frogmore found between St. Helena Island and Beaufort is where the boil gets one of its many nicknames and where Anderson first heard of it. In her cookbook “A Love Affair with Southern Cooking: Recipes and Recollections ” she shares her experience with Frogmore Stew and provides a downsized eight-serving recipe for home kitchens.

Southern culinary expert John Martin Taylor says the owners of Gay Seafood Company in Beaufort claim to have invented the boil in the 1960s but he thinks it is just a natural way of doing things.

“Nothing could be more truly regional ” Taylor says.

Taylors “Hoppin Johns Lowcountry Cooking” features plenty of recipes; one of his favorites being Frogmore Stew. Taylor heard of the iconic Low Country dish sometime after his 1967 high school graduation. He often serves his with local smoked sausage just-picked corn and shrimp right out of the nets.

Sean Franklin a local Carolina Beach chef says that Low Country boils have been a traditional Southern feast for quite some time but he isnt sure if one location can be labeled the official origin.

“Everyone wants to be first at something great ” says Franklin one of the co-owners of The Sawmill a restuarant at the southern end of the county known for its Calabash-style fried seafood. Named for the coastal Brunswick County town that calls itself the Seafood Capital of the World lightly breaded and fried seafood was originally served buffet style in the 1930s at fish camps in the Calabash area. Now paired with hushpuppies and coleslaw the golden-brown fried fish and the Eastern North Carolina city are popular nationwide.

Ceviche
Taste of the Southern tropics

Regardless of a seafood styles point of origin one thing all agree on is the importance of freshness and flavor. With its history anchored in the Southern Hemisphere ceviche is a unique way of preparing seafood that relies on marinating and seasoning without cooking.

Ceviche also spelled cebiche and seviche gains its name from the Mexican verb cebar meaning to saturate which is the main instruction in all ceviche creations. Diced flounder snapper tuna crab shrimp or even conch are marinated in citrus juices. The saturated meat should be placed in a cold refrigerator for at least two hours or until it is cooked. Boca Bay chef Shawn Repasy says that the acids in the citrus juices are what break down and cook the fish. Repasy uses pineapple lemon and lime juices when he creates ceviche. The acids found in these juices alter the structure of proteins in fish making the flesh opaque firm and safe to eat. Once the meat loses transparency it is ready to be served. If the seafood still appears raw inside more marinating is required while chilling.

Like the variations of seasoning found in Low Country boils ceviche flavors are vast. In Josefina Howards collection of recipes “Rosa Mexicano ” the various flavors of ceviche de pescado or fish ceviche are attributed to numerous countries along the Latin American coast. With origins in Latin America and the Caribbean flavors and marinating mixtures are unique to each culture and region. Hot peppers cilantro and lemon are popular seasonings as well as chili paste and lime. Orange and coconut juices are sometimes combined for a softer flavor. In the Bahamas onions tomatoes green peppers sour oranges (or Key limes) and habanera peppers are used with fish and conch.

Locally Boca Bay on Eastwood Road in the Wrightsville Sound area serves up shrimp and scallop ceviche as an appetizer.

“Ceviche is pretty popular amongst our customers; we serve it year round ” Repasy says. “Our specific recipe includes shrimp and scallops but I know plenty of people that use grouper and lobster for their dishes too.”

Old-fashioned Calabash
It doesnt get any more Southern than this…

As pure as the marinated ceviche process may be seafood really cant get much more Carolina than good old Calabash. For Sean Franklin it only takes 350 degrees of clean vegetable oil and locally harvested seafood to start a fantastically fried meal.

“The quality of the seafood is most important in any case especially in fried food ” says Franklin who has 25 years of cooking experience in self-described “mom and pop” restaurants. “We use a lot of local product at The Sawmill and often buy from fishermen near Hampstead.”

At The Sawmill Franklin washes everything from shrimp and grouper to flounder and catfish with egg milk and a decent amount of salt to keep a good flavor on the meat artfully frying up anything his customers order.

“I usually put a little Texas Pete and Worcestershire into my wash ” Franklin admits. “Then I just soak up the seafood in the sauce drain it and put it in cracker meal. I shake off the excess and drop the pieces into hot oil to fry it up real nice.”

Low Country boils ceviche and Calabash seafood are all simple enough to recreate at home but there is one thing to consider: timing.

“People get nervous cooking seafood because of the issue with timing ” says James Bain. “Calabash can easily be burned ceviche over-marinated and shrimp over-boiled or worse soggy. All three of these dishes really come down to the last minute ” Bain says. “Thats a good thing since you dont have to worry about cooking them all day. If you make it simple on yourself its going to be easy.” – SL