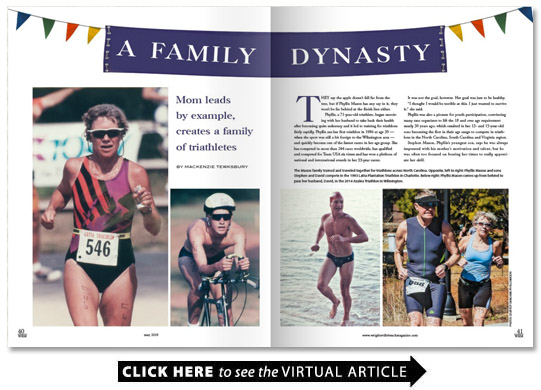 They say the apple doesn’t fall far from the tree but if Phyllis Mason has any say in it they won’t be far behind at the finish line either.

Phyllis a 71-year-old triathlete began exercising with her husband to take back their health after becoming quite sedentary and it led to training for triathlons fairly rapidly. Phyllis ran her first triathlon in 1986 at age 30 — when the sport was still a bit foreign to the Wilmington area — and quickly become one of the fastest racers in her age group. She has competed in more than 244 races worldwide has qualified and competed for Team USA six times and has won a plethora of national and international awards in her 33-year career.

It was not the goal however. Her goal was just to be healthy.

“I thought I would be terrible at this. I just wanted to survive it ” she said.

Phyllis was also a pioneer for youth participation convincing many race organizers to lift the 18 and over age requirement nearly 30 years ago which resulted in her 13- and 15-year-old sons becoming the first in their age range to compete in triathlons in the North Carolina South Carolina and Virginia region.

Stephen Mason Phyllis’s youngest son says he was always impressed with his mother’s motivation and talent but he was often too focused on beating her times to really appreciate her skill.

“I always have flashbacks of freshman year in high school when the teacher asked me if I beat my mom in the Wrightsville Beach Triathlon. I sheepishly said ‘no’ and the whole class exploded. I remember one of the varsity football starters going crazy saying something like “Your mom beat you? If I couldn’t beat my mom I don’t know if I could live with myself.” It was horrifying at the time but I laugh about it looking back — she would have easily beaten anyone in that class ” he said.

Phyllis remembers training with her husband David and two sons David and Stephen. They would go on “fun” 30-mile rides on Earth Cruisers. While training they would order four large pizzas and finish every single bite. On race days she would pack up her Chevrolet Suburban with her husband the back seats jam-packed with four large bicycles and head out together. They first raced the triathlon at Wrightsville Beach; then they began to travel all over the state and beyond for a series of races every summer from Goldsboro to Raleigh to Charlotte and beyond.

“We’d pull up to a race and everybody knew who we were ” Phyllis said. “The race director would always say ‘You’re putting my kids through college!’

“Those race fees were not cheap ” she laughed.

But the price tag was well worth Phyllis’s effort of leading by example for her children to ensure they lived a healthy active lifestyle — something Phyllis once lost sight of.

“I got quite heavy when we first moved here and had the two children ” she explains. “I was stuck at home� I became very sedentary for the first time in my life. I was not able to go out and really get out and get a workout in.”

So when her husband a doctor decided to start working out she decided to join him.

“I needed to start running because I had a bad family history of all the men dying at young ages ” David said. “Phyllis had gone from putting me through medical school — she was a chemist — to moving down here and scrubbing toilets and changing diapers and being trapped in the house. So when I started running I would come back to the house and say ‘tag you’re it ‘ and then she would go run.”

The training started out with just running but their friends urged them to think about triathlons. Phyllis was a lifelong swimmer so she figured she’d give it a shot. Their training was extensive; they tried to do three swims three bike sessions three runs and three weight sessions a week totaling about two hours a day. Their first race the Wrightsville Beach Triathlon hooked them immediately.

Looking at Phyllis’s resume it would be hard to believe that she once lost touch with her active competitive lifestyle. The sport has taken her to Switzerland New Zealand Germany Hawaii Canada and beyond. She has been named the fastest woman in her age group in New Hanover Pender and Brunswick County for 15 consecutive years. She says she would sometimes be out of the water a whole two minutes before everybody else and would often pass much younger racers on her bicycle.

Phyllis was so good in fact that those younger racers she passed often trained just to beat her. “I had a big target on my back ” she laughed. “They always let me know when they finally could beat me.”

Her husband was well-known delivering babies for many women in town and for years Phyllis remembers being known as “Mrs. David Mason.” But at triathlons David says he got a taste of the opposite.

“She was Dr. Mason’s wife and then I was Mr. Phyllis Mason. That was a pretty quick switch ” he laughed.

But the sport has produced much more than awards bragging rights and healthy bodies Phyllis says. It gave her lifelong memories with her family that they continue to cherish.

“We felt like it was the best time of our lives when the four of us were doing races all over the place ” David said. “Those were good days.”

Phyllis’s oldest son David Mason Jr. says he remembers when his parents started competing but he was mostly interested in TV and video games — “it just seemed like adult stuff ” he says. At the time he says it was an accomplishment for them just to participate. But by the time he was in middle school triathlons were a major part of his parents’ lifestyle and they were doing much more than just participating. One day he surprisingly agreed to go on a bike ride with his mom and it wasn’t long after that that he and his brother were competing in triathlons as well.

“My life began to revolve around triathlons too. I was a strong swimmer and I got good at cycling. I loved it. It felt like a great accomplishment when my triathlon times approached and then surpassed those of my parents.”

David said he was always impressed by his parents and the exercise and racing soon just began to become who they were.

“I have fond memories of seeing my mom flex her biceps.”

Phyllis still exercises about two hours a day to feed her “addiction ” but she has since retired from triathlons. When she thinks about the past 33 years she says she has nothing but gratitude for what the sport has taught and given her.