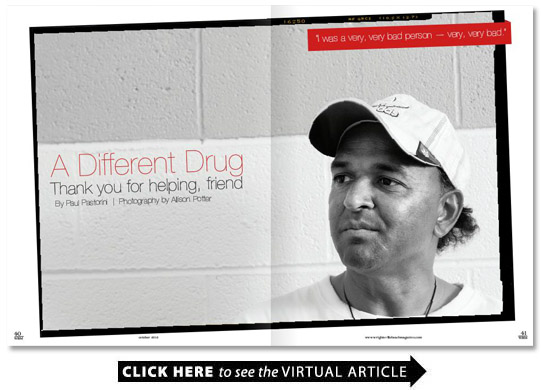 Every Sunday for the last four years Derick Allen unlocks the door to a
nondescript building in Sunset Park at 2:45 a.m. This Sunday is no exception. He begins his work alone in a simple kitchen unloading and organizing a variety of different foods some of which require meticulous prep work. Over the course of the next six hours he will have again successfully completed what he now believes to be his lifes passion and purpose: volunteering in the name of Jesus.

Derick Allen was born in Georgetown Guyana in South America and became a product of the streets following his grandmothers death when he was 13.

He snorted cocaine and shot heroin stole from innocent families distributed narcotics prostituted himself and was in and out of prisons and rehabs for the better part of the next 20 years.

Along the way he married at 19 and moved out of the streets and into a low-rent apartment. In his mid-20s a drug friend introduced him to South Americas black market where he made $1.5 million as a middleman moving exotic animals from Venezuelas border and selling them to South American buyers.

Allen had it all: a beautiful wife a daughter a house two cars two
motorcycles a boat and a lot of money. But within a few years he slipped back into familiar habits and traded everything for cocaine.

It wasnt long before he was back where it all started on the side streets of Georgetown digging for food in trashcans and looking for the next needle.

Life is about choices. Every choice we make has consequences Allen says.

From an early age hardly anyone cared for or even acknowledged Allens existence and he came to learn among other things one harsh truth that those in need of the most help are often neglected and left to their own devices.

Its difficult to imagine Allen in these circumstances as he prepares food alone for the homeless sometimes upward of 200 men women and children at a time. He often wears a freshly pressed white buttoned-down shirt tucked into gray slacks. The only evidence pointing to another life are the baggy pants and loose white short-sleeved shirt hes chosen to wear today; that and the tattoos on each of his forearms which become more apparent as he washes his hands and checks the time on his wristwatch.

Its shortly after 3 a.m. at Early Bread a Christ-centered ministry located in a one-floor building as humble as the tenants of its own religion. Nametags of other volunteers (some recovering drug addicts who have come and gone) from various denominations pepper wall-to-wall red-checkered window curtains. The names hang like silent witnesses to the ministry here.

Right now Allen is preparing 60 pounds of donated chicken which hes carefully cleaned and marinated in ketchup olive oil chopped onions and salt and pepper. The amount of work left before breakfast is served at 7 a.m. seems insurmountable: 300 slices of cheese and buttered toast 520 eggs either scrambled or hard boiled an industrial-sized pot of steaming grits pans of savory roasted potatoes and onions and meats the chicken and often ham or turkey or bacon.

There is a steady rhythm though to Allens work. He moves methodically with specific intent and without worry never slowing down or speeding up. Constant. He flips on a floor fan and sips his coffee before continuing to cook.

The people always come to help friend he says through a thick South American accent.

By 5:30 a.m. volunteers start trickling in some plucking their nametags from the window curtain and introducing themselves to new volunteers. For his part Allen shifts to delegation assigning one person to crack eggs two people to the stovetop one to slice fruit others to arrange donated pastries on trays and bag overflow bread one to wash dishes two to make the cheese and buttered toast and two to carry coffee pots and other necessary items to the dining room for set up. He does this after saying Thank you for helping friend and offers coffee to each of them as they go to work.

The guests begin to arrive with the sunrise around 6:30 a.m. by foot bicycle or church vans. They take seats in the dining hall just as volunteers complete last-minute preparations. In the kitchen a circle is formed by joined hands. Deacon David Hueholt whose church St. Peter the Fisherman oversees the work of Early Bread leads the prayer. Deacon David asks if anyone is here for the first time and whether there are any prayers that need to be lifted up this morning. Some request prayer for an end to violence in the world; others ask to donate to Compassion a foundation geared toward helping struggling children survive in countries like Kenya. One man his voice shaky with sadness and hope requests prayer for his son who shares the same disease of addiction that he may find it in himself to seek help. Then Allen speaks:

I was an addict for 25 years on the street. Today Derick is 13 years 10 months and 18 days clean. Me am better than nobody. An addict is an addict. I try everything to stop using and nothing work. Then I try Jesus and Jesus work friend. On the street no one is safe; in prison you go to get food and a good nights sleep. Today Jesus is in my heart friend.

He says this without embarrassment and without eloquence but with the kind of genuine honesty that can only be reached through profound humility. For a moment youd think based on peoples expressions that they have found relief through Allens message.

He ends by saying My thoughts will be on my recovery living and enjoying life without the use of drugs. Just for today I will try to fight it with the help of Jesus to the best of my ability.

Prayer typically ends with the Serenity Prayer and the Lords Prayer and with a newfound energy the group gets back to work.

In the dining room the homeless have formed a single line that wraps around the three walls surrounding the food line. Following a welcome and prayer by Deacon David Allen reminds those assembled that the women and children will be served first.

From a row of simple tables now loaded down with hot wholesome foods guests are greeted (many by name) with compassionate smiles and served as much as they want. There is music plenty of food and the kind of camaraderie that can only be found through the virtues of service love and kindness. For one hour they are free.

The more you help people the faster they heal Allen says.

Allen began volunteering the first day after his third attempt to stay clean. He was being held in a South American jail cell awaiting trial for larceny with the possibility of a ten-year sentence. A priest named Andy Carto approached his cell on the seventh day and offered to pay for his drug debt and recovery. It totaled $375 000. He told Allen Live for your family; live for Jesus and if you can help somebody help them.

That message has stayed with Allen for nearly 14 years and in all
likelihood it will continue to stay with him.

Each year he travels back to the same streets he grew up in (in Georgetown) passing out plates of hot rice and slip-slaps to addicts and the homeless and carrying the message of Jesus along with his message of hope: I came from these streets; with Jesus friend you can make it too.

He plans to move back to Georgetown Guyana in four to five years to run his own volunteer feeding program.

But for now Allen scans the dining room in a nondescript building of Sunset Park watching the group finish its meals.

As they start to leave seemingly satisfied and grateful to have been helped Allen says I would like to do this for the rest of me life.