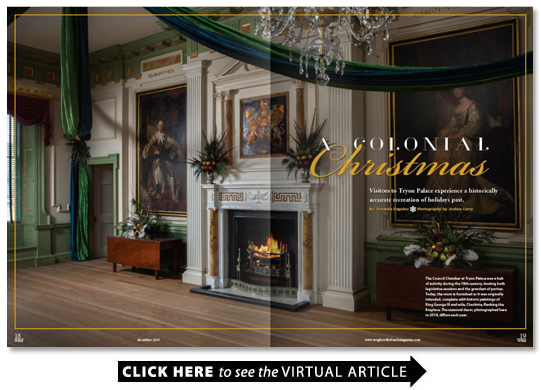 The team creates lavish wreaths and centerpieces. They move furniture and decorate trees. They set tables drape fabric and design elaborate costumes as the colonial Christmas is recreated.

Boxwood wreaths are embellished with holly berries apples dried yarrow pomegranates and pheasant feathers. Wreaths made with glossy magnolia leaves are dotted with tallow berries and balanced with a bouquet of oranges peacock feathers and a large pineapple. In the palace rich cerulean crushed satin taffeta weaves through an evergreen garland on the mantel joining above the fireplace with a painstakingly designed 3-foot tall arrangement of seasonal fruits.

“The decorations accurately reflect all the natural things that would have been used in a historical setting ” says Tryon Palace research historian Siobhan Fitzpatrick. “In the 1770s they would have had garlands done in boxwood and other greens and decorated with the fruits and berries that were available. All of those natural materials are period appropriate — lemons apples pineapples mistletoe different evergreens artichokes.”

With the help of greenhouse manager Freda Pyron many of the items used are grown on site although there are things that must be ordered in advance Fitzpatrick says because of the sheer volume needed. While many fruits are grown within the palace gardens it would be a challenge to produce the amount needed for the grand celebration.

Fitzpatrick is tasked with researching the annual theme for the celebration and helping develop a plan to bring the era to life. If fabric is going to be draped on the fireplace Fitzpatrick is the person who ensures that fabric was used to decorate during this period and the color is historically accurate as well.

“Everything is constructed on site by gardening staff household staff and volunteers over the course of about two weeks ” Fitzpatrick says. “We create all the floral arrangements and slowly everything will be moved into place. All of the themes are inspired by the time period and the materials that were available during the time period. It’s a lot of fun. It’s a big job but it’s definitely one that is very rewarding too. Everyone is always so excited by how beautiful it turns out and it is such a wonderful experience to see how much our visitors enjoy it.”

Tryon Palace is not as one author described it a historic restoration. It is history imagined and reconstructed. The shape of the entry pilasters the color of the draperies the placement of the kitchen garden and all the understated details were taken from historic records. But that has little bearing for guests. For all intents and purposes Tryon Palace is a historic site the first capital of North Carolina and home to the oft-loathed royal Gov. William Tryon.

Tryon choose English architect John Hawks to design his North Carolina home. Construction began in 1767 and three years later on Dec. 5 1770 Tryon celebrated its completion. It was a short-lived residency. After much upheaval Tryon fled North Carolina in 1771 to become governor of New York. Josiah Martin next in line for the post abandoned Tryon Palace in May 1775. Soon after Patriot forces took over the palace.

It went on to serve many purposes including as the state capital building a boarding house school and Masonic lodge before being consumed by fire in 1798. The stable office and one basement wall were all that remained. Reconstruction of the site was completed with painstaking detail from the books on the library shelves to the plants in the kitchen garden. Along with the original architectural plans Tryon left behind a complete inventory of the items that were in his home.

The reconstruction of the historic palace was led by Gertrude Carraway and funded through a trust established by Maude Moore Latham. Groundwork and research began in the mid-1930s although the project took years to gain steam. The former palace site had been developed since it was destroyed by fire more than 125 years earlier. To build the palace again more than 50 buildings were moved Highway 70 was rerouted and a new bridge was constructed over the Trent River.

Latham died in 1951 before construction began. Her daughter Mae Gordon Kellenberger carried on her mother’s mission. The site opened to the public in April 1959.

The site opens its doors daily to visitors throughout the year. While most tourist destinations see an uptick in visitation during the summer months Tryon Palace’s biggest month is December.

“There are two separate things for visitors to be aware of ” says Craig Ramey marketing and communications manager. “People can come to Tryon Palace anytime in December and they can see the grounds transformed into Christmas. The holiday decorations are up for the entire month and are included in the regular admission price. But we also have a Candlelight Christmas celebration that is traditionally held two Saturday evenings in December and allows guests the chance to go a little deeper into the colonial celebration.”

This year four of the historic structures on the site will come to life with tales of Christmas past as volunteers and staff members in period costumes perform scenes in each of the buildings that set the scene for holiday celebrations. Candlelight Christmas will take place December 12 and 19 from 4:30 – 9:30 p.m.

In the Stanly House the family searches for their missing daughter Elizabeth who eloped in 1814. In the Commission House a 1950 Christmas Eve is enacted as the homeowners busily prepare for their children and grandchildren to visit the next day. Preparations are underway for a grand ball in the palace. The women practice their dances in corseted ball gowns while the staff prepares the dining room.

As guests meander from room to room the historical importance of Tryon Palace and the region itself takes shape.

“Each year there are certain aspects that we want to be sure the public can experience during our Candlelight events — fireworks decorations of specific houses hot cider and cookies circus acts in the tent and the chance to tour some of our buildings by candlelight. Those are things people can always expect ” Ramey says. “But what we try to do internally is make sure that it’s not going to be the same story as the year before. The stories the vignettes are different from year to year and each year we choose a different theme to weave those stories around.”