A Coastal Thing with a Southern Swing 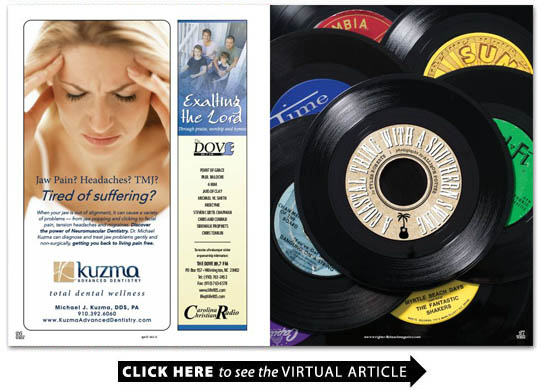 Its a hot summers day. Its the rushing wind through a topless car. Its a midnight stroll on the beach. Its a hotdog on the boardwalk. Its a trip to the fishing hole. Its boy meets girl. What is it you may ask? It is the smooth coastal sounds of southeastern Carolina beach music.

For nearly 50 years beach music has engaged multiple generations in a musical tradition that was born in the Cape Fear region. It is the convergence of soul rhythm and blues country and a little bit of rock and roll. All of these influences are wound up to produce a sound that is distinctively regional and characteristic of the fun-loving lifestyle that is portrayed in the lyrics.

On a Thursday night in Wilmington N.C. Jim Quick and Coastline take the stage at a local music venue. The dance floor is empty but all of that changes once the band plugs in. Vibrations bounce from the instruments and speakers off the wall and into the listeners ears uniting everyone in the room. For some fond memories well up from within. For others the music evokes the anticipation of good times yet to be had and memories yet to be made. Like a magnet the music pulls both young and old to their feet and onto the dance floor.

“It is hard for anybody to listen to beach music and say I dont like it. It is just happy feel good music ” says Jim Quick the lead singer and frontman of the band. Quick grew up in Scotland County North Carolina in a place known as Gum Swamp. He had his first taste of music listening to the soulful sounds of The Dominoes and Sticks McGhee which were favorites of his caretaker Miss Ruby.

Quick and his band began working with beach music legend the late General Johnson of the Chairman of the Board in the 1990s. It was a chance for the young band to learn from a man that had recorded beach music classics such as “Carolina Girls” and “Give Me Just a Little More Time.”

“He was the number one lure ” Quick says. “We have to go in and grab those college kids and the General was the best at that. He was a pro.” General Johnson mentored Quick teaching him how to hook listeners and create disarming set lists that had crowds in a sense dangling on a string.

At any given Chairman of the Board show in Wilmington it was not uncommon for the room to be shoulder to shoulder. Lifelong fans would shag dance casually in an open area while college kids crowded the stage shouting the words of Motown classics that were written decades before they were born.

But this scene is not unique to the Chairman of the Board. Other beach music bands like Band of Oz which also worked with General Johnson include songs in their set list that are targeted to attract new generations of beach music fans.

“You will be shocked to see how many high school and young college age kids are out there shagging and just like the beach music ” says David Hicks the drummer for Band of Oz “but we also want to give them a little bit of dynamite and throw that mix in.”

In addition to the bands classic originals like “Shaggin” and “Ocean Boulevard ” Hicks says that Band of Oz will infuse songs that are currently topping the pop charts to keep its act up-to-date. It appears to work. After nearly 35 years of performing as the Band of Oz the band continues to perform five nights a week and bring in new fans.

Freddy Tripp who has played the keyboard and sung with The Fantastic Shakers since 1986 says that during the course of 36 years the bands fan base has come to include the original fans children and grandchildren. Maybe it is in the way that the music has remained the same that has retained loyal fans and invited new listeners.

“I think every genre of music has progressed in a way that it has lost its original flavor ” says Quick. “I think everything does that from relationships to countries but there is something about beach music that holds steady. There is some kind of element in that music that has held steady for 50 years and it shows no sign of dying.”

Like an old family album the traditions the memories and the regional flavor of beach music has continued to be cherished year after year.

“It is something that we have held on here in the southeast with pride ” Quick says.

Move outside of North or South Carolina and performing beach music is a whole different ballgame Quick says.

“Even coastal states on the Gulf of Mexico like Alabama and Louisiana are unfamiliar with beach music ” Quick says. “I have to leave out a lot of the antics and colloquialisms that refer to Carolina beach music.”

“It is such a unique heritage to our part of the country ” Tripp explains. “The Carolinas and the southeast can call beach music their own style of music that is unique to them which is really great.”

One similarity that is shared by beach bands is the musicians enthusiasm on stage. They are constantly in motion shuffling their feet to the beat of their own music and keeping the party alive. Whether it is Quicks high leg kicks the Band of Ozs cheery choreography or the Fantastic Shakers swaying to the vintage sounds of doo-wop the musicians appear to be having the times of their lives on stage. The energy is contagious and it spreads through the crowds.

Beach music is often played at weddings festivals parties and celebrations where hearts are filled with joy and scrapbooks are filled with memories. Perhaps that is what is at the heart of beach music. In a world that is sometimes unhappy angry and obscene beach music offers an outlet.

“Even though it is my job it is their vacation when they come to see me ” Quick says. “Even if it is just a two hour vacation.”

Beach music is a chance to escape into a simple sun-drenched world filled with black and white memories a chance to celebrate the high points in life and leave troubles at the door.

“Usually when you are performing people are there to have a good time and enjoy the music ” Tripp says. “They see a lot of their old friends and make new friends.”

Tripp also attributes beach musics success to its affability. The songs beats are made for dancing the lyrics are made for singing and the atmosphere is friendly and inviting.

“It is just a nonthreatening form of music about the good experiences in life ” Tripp says. “That kind of thing has stood the test of time.”