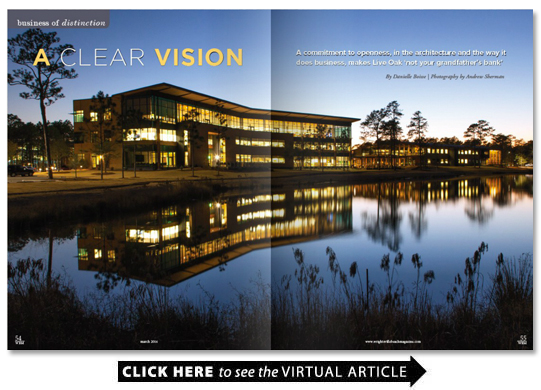 Transparency is paramount at Live Oak Bank both in its beautiful corporate headquarters in Wilmington and in the way it conducts its business.

“All the offices are like a glass shower — you are exposed to the world ” says Lee Williams vice chairman of Live Oak Bancshares. “Transparency is a big deal at Live Oak Bank part of the Live Oak culture and mission. There are no private meetings; everyone knows who is coming in. All that leads to collaboration cross-pollination and eye contact. Throughout the course of the day that helps our efficiency.”

Live Oak Bank employs more than 300 people at the two-building 10-acre campus off Shipyard Boulevard behind Verizon and Wilmington Ortho parceled out from a more than 100-acre tract owned by the MacRae family.

A combination of light glass and wood indigenous to North Carolina offers a physical transparency. The architecture is pure with interiors of white walls enhanced with natural daylight a glass fa�ade cypress ceilings and custom millwork. Contrary to most designs the stairs are aesthetically prominent and with views and infinite daylight they are the preferred way of passage. Elevators are disguised in the floor plan and almost never used.

“The typical office building is a rectangle with offices and cubicles around the perimeter ” says Laura Miller of LS3P the lead designer on building one. “We took that model and split it in half. We are horseshoe-shaped here. It’s not the most efficient layout by any means. What COE Chip Mahan Lee Williams and bank president Neil Underwood wanted us to do was to give everyone a phenomenal view of the live oaks. The only offices that don’t have windows are the storage rooms that turned into offices because Live Oak grew so quickly.”

Everyone on the design and build team had the same goal.

“We all wanted it to relate to the outdoors ” Bozeman says. “We felt it needed to be organic and blend with the outside.”

It’s all part of the bank’s philosophy that an aesthetic workplace will attract — and keep — the best talent.

“We wanted to create an open collaborative atmosphere that was as unique as our business model in an effort to attract and retain talent forever ” Mahan says.

ive Oak Bank was founded in 2008 with a goal to finance small business growth nationwide. It now lists $1.1 billion in assets with “$800 million to $900 million in deposits half of which are local Wilmington deposits ” Williams says. The branchless bank lends to niche industries in 50 states and has made 3 400 loans over the eight years including 1 000 in 2015 according to Williams.

“We are different ” Williams says. “We are not your mother’s father’s or grandfather’s bank. We find industries we can understand and we hire people that were in the industry. They have a bond and common language with the business owner.”

The bank had 55 employees when it started planning for construction of the new campus in 2011. At a cost of $11.8 million the first building was intended to house 100 employees inside 37 000 square feet at a site down in the Barclay Commons area.

“It evolved — most of the time it was a moving target ” says Philip May project superintendent with Clancy & Theys.

The campus has attracted attention well outside the Cape Fear region. The first building has won national design awards and been featured in Architect Magazine.

“Not a lot about that building is common ” says Chip Overman senior project manager at Clancy & Theys. “Those king post trusses and metal tension rods are an architectural element as well as structural element. It was a good effort on the designers and structural engineers to coordinate that to provide a very aesthetic accent to the ceilings. The post and beams are glue laminated southern pine. This is another architectural feature that also has a structural element. The glue laminated beams and columns gives the engineers very specific data that they can use when designing the building so they can account for the structural design and strength needed as well as provide that really organic look that Live Oak Bank wanted. They were very clear about wanting a very natural organic structure both inside and outside. By making it a horseshoe they were able to increase the exterior wall area of the building. With the use of windowing and curtain walls glass walls they were able to bring a lot more natural light into the building. It is by no means what you would build if you wanted to build the most cost-efficient structure. They recognized they were spending more money to benefit their people. Obviously it is much more desirable to have natural light and windows than an interior space filled with cubicles.”

Building two was completed in July 2015 at a cost of $18 million. It houses the sales force of Live Oak within its 57 000 square feet in addition to its onsite restaurant The Grove which buzzes with social interaction.

“There were two main things different one was the size [20 000 more square feet] and the other a very nice campus amenity a 125-seat restaurant and commercial kitchen ” says Danny Adams the LS3P lead designer on building two. “It is an employee restaurant. It is about 6 000 square feet. It is at one end of the building which allowed us to build a lot of exterior seating terraces and patios that are outdoor spaces.”

Another addition was an open visitors’ lobby.

“When we designed the first building the bank was thinking of themselves as a very non-public kind of company ” Adams says. “The first building has a very small lobby that was not ever meant to orient a lot of visitors. What they found as they’ve evolved and continued to grow business that didn’t end up being the case. Now the front door for the bank is in the second building. It has a two-story lobby with a lot of waiting and amenity areas. Because now the second building is really the public front door to the bank we worked with local artist Dumay Gorham who installed a 30-foot high sculpture on the front of the building that is the logo tree for Live Oak Bank.”

The two buildings are joined by a covered connector. The outdoor seating areas adjacent to the restaurant have retractable shade awnings and canopy roofs that can be opened or closed depending on whether the desire is for sun or shade.

The numerous common areas are designed to encourage employee interaction and enhance the work experience. Several fully equipped break rooms are strategically placed near workspaces. Building one houses a 2 000-square-foot gym for employees; aerobics classes and massages can be part of employee lunch breaks.

A large dog park built by Clancy & Theys is another perk that was developed by understanding the employee demographic.

“All the young people come out of college they don’t have a boyfriend they don’t have a girlfriend but they have a dog ” Williams says. “On good weather days there are 15 to 20 dogs out there with cameras where the employees can go in and look at their dogs.”

The average age of an employee is 29. The bank has hired more than 100 UNCW graduates as part of its staff.

“Live Oak Bank has a laid-back atmosphere. We didn’t want it to be corporate ” Bozeman says.

Employee workstations were custom designed providing each employee with floor space storage and room on their desks for multiple screens. These stations are faced with natural cypress indigenous to North Carolina and were made by North State Woodcraft in Shallotte North Carolina.

“There was over 101 000 linear feet of cypress used in the construction ” Overman says. “This equates to over 55 000 board feet. We also used a good deal of white oak and Ipe wood.”

The glass fa�ades in both buildings give every employee a view of the live oaks that were transplanted from South Carolina to serve as the logo for the company.

“There is so much natural light in the building that most days the lights aren’t on ” Miller says.

In keeping with the emphasis on aesthetics trees were important. There were three long leaf pines in the middle of the courtyard that were built around for a year until the difficult choice was made to cut them down. But otherwise every effort was made to keep move relocate or repurpose the trees.

“We tried to keep as many trees as possible ” Miller says.

The employee amenities extend far beyond the interior to the outdoor spaces and attractive landscape. Balconies outdoor sitting and gathering spaces with pond and woods views and a jogging trail are also thoughtfully placed.

It’s all part of a workplace culture that led American Banker Magazine to rank Live Oak as No. 1 on its list of Best Banks to Work For in 2014 and 2015.

“If you read all the self-help books it says the three most important things in a company are its stockholders its customers and its employees ” Williams says. “Well if we were writing the book we would not include any of that. We would say the most important thing is the employees. If you take care of your employees you don’t need to worry about the customers or the stockholders.”

Something is clearly working. In a November 17 2015 feature Forbes noted “In the eight years since it first began lending Live Oak has leapfrogged up the ranks of the largest Small Business Administration’s 7(a) lenders to the number two slot by dollar volume behind only Wells Fargo.”

The 10-acre site allows for future growth which is already necessary. A third building is planned with more likely to follow.

“It will be a copy of building two without the restaurant but it may be taller. Building four five six and seven we will have to wait and see ” Williams says.

The bank went public July 27 2015 trading under the ticker symbol LOB on the NASDAQ Stock Market.