A Celebration of Beauty and Friendship 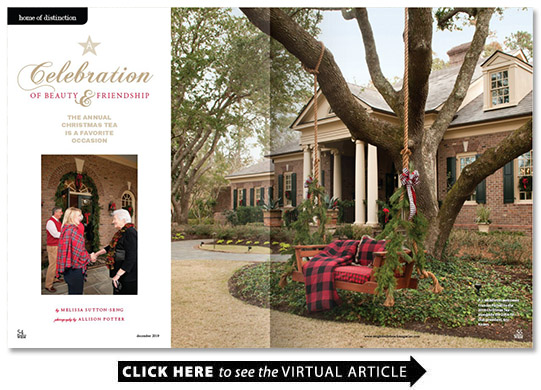 The Annual Christmas Tea is a Favorite Occasion

Each December the Cape Fear Garden Club gathers to celebrate the season with an annual Christmas Tea. And what better setting than in the home of one of its own surrounded by festive decorations and delicious food created by members?

The Cape Fear Garden Club was established in 1925 and has been holding an annual Christmas social for the past 60 years.

“It’s a chance for the ladies to let their hair down but be pretty at the same time as they would put it ” 2018-19 club president Eric Kozen says.

Kozen is one of the few male members. He says he’s learned a lot from the women of the club including the fantastic decorating they accomplish at each year’s Christmas Tea.

The Tea is hosted by a different member each holiday season. The homes and gardens are always lovely of course but there also needs to be space in the home and parking outside for 100 or more guests. It’s one of the challenges that comes with being among the largest garden clubs in the country; the Cape Fear Garden Club has over 400 members as compared to the 20 or 30 members other clubs generally have.The 2018 tea was held at the home of P. J. and Allan Middleton.

The club is a nonprofit organization best known for the annual Cape Fear Garden Club Annual Azalea Tour. Most of its events during the year have a public service or educational program. But the members-only Christmas Tea is purely social a chance to enjoy one another’s company and get into the holiday spirit.

Which isn’t to say that no learning takes place. Those responsible for the baking and decorating often teach one another new techniques and attendees frequently take photos in order to repeat at home what they experience at the event.

Two committees are responsible for creating the magic of the annual Tea: the Flower Arranging Committee and the Hospitality Committee. The Flower Arranging Committee is chaired by Hillary McNeir. The committee made up of about 40 women is responsible for all the decorating. Once the venue has been secured McNeir and a small team of five or six committee members meet with the homeowners to discuss possibilities. The team takes pictures of the rooms to be decorated and then sets out to look for ideas and plan their designs.

The second committee at center stage for the Christmas Tea is the Hospitality Committee. Experts in more than gardening the Garden Club has a long tradition of made-from-scratch delicacies. Every year for the Azalea Festival ribbon cutting ceremony each member bakes two to three dozen cookies — no store-bought confections allowed. At the Christmas Tea far more than cookies are on offer. lma Fennel is the long-time chair of the Hospitality Committee. She and her team make an array of finger foods for the event. Inspired by the festive treats of the annual holiday party a cookbook titled A Christmas Tea has made the accumulated culinary expertise of the club accessible to anyone who wants to learn from its tasty traditions.

Two or three weeks before the Tea all the designs have been chosen and it’s time to start bringing the vision to reality. The entire committee convenes at the home to strategize. Photos of each design idea are placed in the respective rooms and members select which space they want to focus on. The women work in teams to shop for and then begin working on the decorations.

More than a yearly decking of the halls the collaborative creative experience is a chance to build friendships and learn new skills. Some club members are reluctant to join the Flower Arranging Committee with its Christmas Tea responsibilities citing a lack of decorating experience. There’s no need to fear McNeir says. There are always members present to teach new skills to those who want to learn; someone who makes bows or another who’s good with flowers. Committee members find that once they get started they’re creating something beautiful and having a great time in the process.

There’s a mix of live and artificial greenery depending on the location it’s to be hung. Unwanted cuttings are collected from Christmas tree lots and foliage from the gardens of Club members and friends. Last year’s decor included trimmings of cryptomeria also known as Japanese cedar from the home of Kozen’s father as well as Leyland cypress trimmings from various gardens — all with permission of course.

For the many yards of garland included in the 2018 decor the committee twisted together three strands of greenery: two strands of Fraser fir and one strand of Leyland cypress. The ladies positioned the strands of fir with needles pointing in opposite directions to achieve a fuller look. They then twisted the fir and cypress strands together before hanging the garlands and adding bows and other embellishments.

Inside the home the decor was carefully crafted to complement the spaces and furnishings already in place. The committee always makes sure to incorporate treasured items from the homeowners’ personal collection of decorations.

“The one thing I did was the Christmas tree in the foyer that was all of mine. I have done that same tree every year since the kiddies have been born ” says P. J. Middleton. “I felt honored to do that.”

The Flower Arranging Committee gathers inspiration from a variety of places from department store displays and magazine pages to Pinterest boards. They say it’s all about being open to new ideas and being willing to learn new things.

McNeir says the principles her committee uses on a grand scale when decorating for the Christmas Tea can be incorporated into any home. She suggests taking a wreath — live or artificial — and adding small accents that appeal to you. Remember it’s not scary she says. Experiment until you find a look you like then repeat it the next year or try something totally new.

“Anything you have can be embellished and changed from year to year ” McNeir says. The key to becoming a good decorator? “Keep your eyes open and use your imagination.”

McNeir says the principles her committee uses on a grand scale when decorating for the Christmas Tea can be incorporated into any home. She suggests taking a wreath — live or artificial — and adding small accents that appeal to you. Remember it’s not scary she says. Experiment until you find a look you like then repeat it the next year or try something totally new.

“Anything you have can be embellished and changed from year to year ” McNeir says. The key to becoming a good decorator? “Keep your eyes open and use your imagination.”