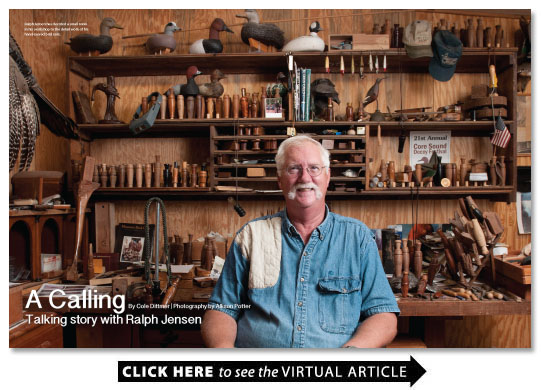 Dusty wood blocks rough timber cutouts and goose duck and turkey calls make up the wooden menagerie around Ralph Jensens shop. You can be sure there is a story for every one of them.

Jensen has received an extraordinary amount of acclaim and requests for his hand-carved calls since he began making them 12 years ago but he cannot be classified as merely a waterfowl call maker. Jensen has worked with wood for more than 40 years. He easily identifies the point in his life when that desire took hold and changed it forever.

It is hard to imagine Jensen a soft-spoken man as the living incarnation of the character from Easy Rider he claims to have been. Without his rough past he says he probably would have never found himself as the owner of his carpentry business The Masters Touch.

That [woodworking] is a gift Jensen says. I was very destructive growing up and it really was my reputation until I was about 22. I had been with motorcycle people gang people really had a rough background but then I went to a little home prayer meeting that my mother had wanted me to go to.

Walking barefooted into the home in Greensboro North Carolina sporting a broken toe bell-bottoms and a head of hair that flowed to his waist Jensen says he was puzzled by the respect he felt for the young South African preacher speaking that day. After the preacher called for anyone who needed to be healed to come up to him Jensen says he jokingly walked up to the man asking for his toe to be healed. He came away with much more.

This is the first guy I had seen like that who I thought was real he recalls. It came out of me before I knew what I was doing I told him I wanted to be cleansed from the inside out and after I walked away inside me there was this heavy weight I had since I was a kid about Christianity and it just lifted off me I felt so light.

With his newfound faith Jensen says he immediately changed his ways and decided to try his hand at carpentry. With no prior experience and no family history in the trade Jensen was thrown into millwork and cabinet making at the Snow Lumber Company in High Point. All the time he was learning on the fly Jensen says his hands were guided by something outside of himself that guidance still continues today.

Jensen turned his carpentry skills toward carving after picking up an old two-dollar duck call missing its reed. It started out really odd and it was just a fluke that any of this ever happened he says. Being inquisitive I had to figure that out; I never had a duck call. Whenever I went duck hunting somebody else blew.

The first reed Jensen carved for that call was made of reclaimed heart pine that had been submerged in the Cape Fear River for hundreds of years sanded down to one ten- thousandths of an inch.

Twelve years and hundreds of calls later most of the ideas Jensen gets for his calls come from his customers who send him anything from a portrait of a dearly departed birddog to pictures of ducks geese and turkeys. Whether these calls will take the actual shape of these figures or be carved in relief on the outside Jensen starts with a sketch selects the wood making cross hatches and sanding until the small wooden instrument comes to life.

Jensen has caught the attention of one of North Carolinas most famous artists Bob Timberlake who he first met in 2004.

Hes got some of my first duck calls and first goose calls and he gave them to his grandson Jensen says.

Timberlakes latest commission portrays a mallard head. The birds bill is wide open mid-quack. Jensen says this particular call is going to be one of his most collected pieces because of the unique design of the call and because of the rarity of the wood a piece of an English walnut tree grafted into an American walnut tree that is more than 150years old.

In fact that is so rare I had a wood guy tell me not to even touch it but I had already cut it up he laughs.

Other rarities that have found themselves transformed into Jensens calls include a piece of a library door from a chapel in Bath England that dates back to the thirteenth century; the stock of a Parker shotgun that belonged to Wilmingtons own Admiral Edwin Anderson Jr.; the soundboard of a nineteenth century square piano with ebony and ivory inlaid from the pianos keys; and even a chunk of rosin that he uses in his turkey calls given to him by the man who made fiddles for Bill Monroe the renown bluegrass musician of Grand Ole Opry fame. Jensen says that rosin is the secret to what makes his turkey calls so effective.

This came from Germany. Its not from a pine tree but it is the very finest rosin to use for a bow for violin Jensen says. When you go to make a purr thats the killer thats what gets them they cant take it because it is like the purr of a satisfied hen.

Having fabricated calls out of a wide array of items he says no job has been too challenging.

Ive never turned a job down especially out of fear of not being able to do it because I knew where the gift came from; thats the whole truth to the story Jensen says. That is where The Masters Touch came from.

A man can have a couple decoys and hes got a good collection says D.C. North whose collection of waterfowl decoys numbers a few more than a couple. While his is not growing at the pace it was in the early years of his 45-year history of collecting decoys North says there is still a choice few out there left to hunt. Ill do it until the day they put me out at Oakdale North says. There is plenty of stuff out there to find; I get just as thrilled today picking up something he says.

A lifelong hunter waterfowl conservationist writer and known around the area for his skills as an auctioneer North says what began as an extension of his passion for collecting all types of American folk art and artifacts became a source of many friendships stories and something to pass on to hischildren.

I just enjoyed watching these old timers put [decoys] out when they went hunting and Id take my children and wed go what youd call picking or door knocking so they all grew up around it North says. Ive bought and sold these things for oh lord 45 years now and had a lot to do with developing collections for other individuals.

Sandpipers mallards wood ducks canvasbacks pintails swans and geese deck the halls of Norths Currie North Carolina home each of which he can date and recite their point of origin.

While he is not able to ­identify the carver of each of his decoys he can say with certainty that every one of his birds has been used on the water.

There are a lot of people that acquire things just because they think its the cool thing to do he says.I dont collect anything that is considered decorative; I want these things to have been in the water and shot over. Bam!

I like anything from off Cobb Island; its just so darned naturalistic the way they carved them he says. You never see many of them carved in the same head position; they always seem to have a little variation because they were all made by hand. North says his oldest decoy a black cygnet circa 1850 dates to the time when the use of decoys became more prevalent.

There werent many decoys before 1840 or 1850 and the reason for that is they couldnt sell the ducks because they were limited as far as the refrigeration until these sailing ships were able to get ice he says. Then the demand by traders for decoys soared. They would anchor off the coast and these guys would take hundreds of decoys out in a barrel. Sometimes they would get about three dollars for a pair of canvasbacks and one dollar for the little ruddy ducks.

Determined to demonstrate that each of his birds still float North pulls down a circa 1880 merganser with its original paint fills the kitchen sink with water and sets the 132-year old decoy afloat just as steady as its living counterpart.

What North appreciates the most about his artifacts is the way in which they provide a glimpse into American history and the history of the only folk art solely developed in America.

Once neglected by collectors and scholars folk art has become one of the most popular and exciting fields in American arts and antiques now North says. Thats the fun part about this is you go back in history and these people they didnt know it but they were leaving stories behind.

One decoy in particular that North is proud of is a black duck carved around the turn of the nineteenth century by the three Caines brothers in Georgetown South Carolina. As North recalls the Caines brothers hunted for Bernard Mannes Baruch a confidant to seven presidents and a Wall Street millionaire who bought the 17 500-acre Hobcaw Barony in Georgetown in parcels between 1905-1907. As the story goes during one particular flood event the decoys washed out of the hunting shack on the barony and onto the side of Highway U.S. 17 where passersbys seeing them picked them off the side of the road.

Those are probably one of the most sought after decoys now North says. Only 40 of them are still known to exist today.

Only retired 10 years from his career in the brick industry North says he thoroughly enjoys the time he is able to spend at home with what he calls his floating sculptures his orange tabby Jerome and the Canada geese that have just begun stopping by his backyard pond on their way south as they do every year. He doesnt hunt these geese but with a wry smile he says he has a little pond out back a ways he visits to get his fill.