A Bridge to the Future 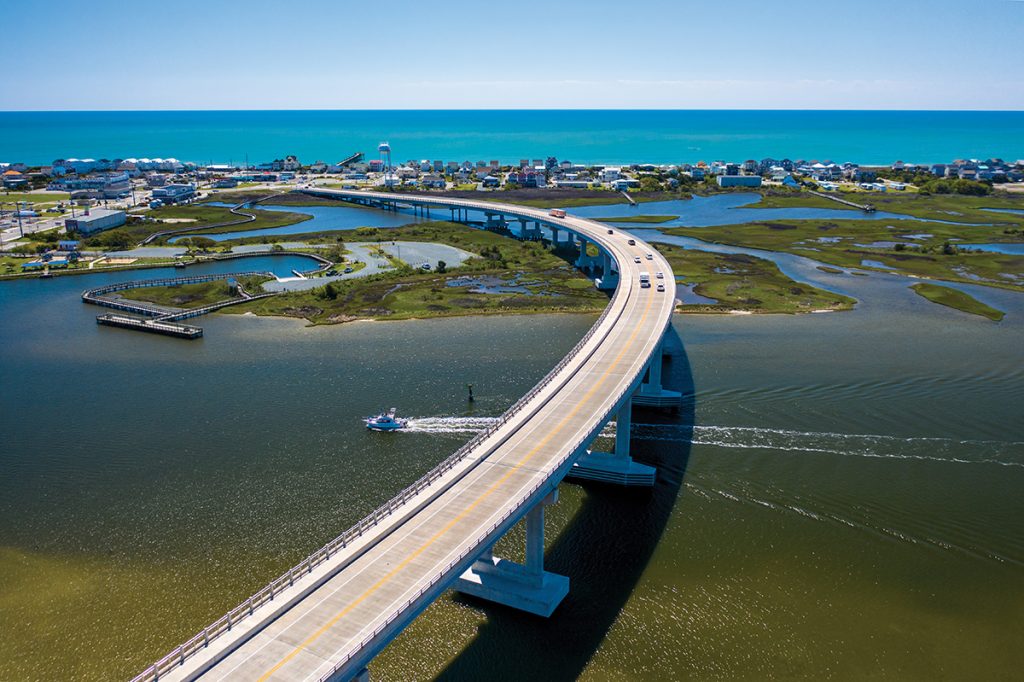 Completed in late 2018, the new Topsail bridge has become something of a tourist attraction. Renn Williamson.

It makes for a swift and safe drive from the mainland to Topsail Island, but the Surf City bridge is so much more than a new road. It’s a scenic path for outdoor enthusiasts and a gateway to an economic boom.

The bridge, completed in early December 2018 — a full nine months ahead of schedule — was designed with cyclists and pedestrians in mind. There is one auto lane in each direction with ample bicycle shoulders and a 10-foot wide multi-use pedestrian path, protecting walkers from vehicles by a concrete barrier.

“The bridge has become a popular walking path, with the largest hill around,” says Hampstead resident Deborah Farmer. “Many people walk it at sunset or sunrise to catch the magnificent views of the sun shining on the water.”

The bridge’s design is aesthetically pleasing. Better still are the views from it. It sits 65 feet above the sound and is nearly a mile long.

“It is a beautiful bridge. As you are coming onto the beach with the high rise, you can see the ocean and across the beach and Topsail Sound,” says Wilmington orthodontist Greg Richardson, who owns a property on the island. “It is much more scenic and awe inspiring as you are coming onto the island than at ground level before with what we called the Old Pickle Bridge.”

Richardson is speaking of the old Surf City swing or turning bridge, which was built in the 1950s and slowed car traffic many times each day to let boats pass.

“My family called it the Pickle Bridge because it was green,” Richardson says.

Hundreds of residents and island visitors loved the swinging bridge. The thumpity-thump of driving across it was a signal to sleeping children that they did not have to ask one more time, “Are we there yet?”

“When visitors saw the bridge, they knew they had arrived at the beach,” Farmer says. Her husband, Jim, plays bass guitar for a local bluesy rock band named “Turnbridge Band.”

Others felt so connected to the bridge that it prompted photographer Jeff Wenzel to create a 50-minute documentary called “Swing Bridge Memories,” which is available on YouTube.

Change is not always quick, easy or unanimous. But thriving towns must flow with the wave of progress.

“I think the new bridge really brings credibility, and raises the standard of the whole place,” says Scott Franko, marketing director for Treasure Realty and a member of the Chamber of Commerce. “When you have something that modern it makes a really big statement. It is iconic. We just had our first Holiday Flotilla recently in Sound Park. That bridge is not just a connection point, but where it is located affects so many things all around it.”

Sprucing up shared community spaces is a plus. Increased business access is also a plus, but comes with some tough decisions.

“That bridge forced businesses to move or relocate or close down or figure out some new things,” Franko says. “Other businesses have chosen to relocate like right around the ends of the bridge, on both ends.”

Along with the modernness of the bridge, Surf City is updating a few things.

“The town is even considering changes to some of the ordinances that will further benefit the community,” he says. “All of a sudden you are seeing an economic pressure to progress into the future, where before, Topsail has always been known as very quiet, quaint, sort of the opposite of progressive.”

Franko pointed out the location of the bridge has been good for the city park.

“Surf City has revamped Sound Park, it has revamped the streetscaping, it has opened up more parking,” Franko says. “It has become a place for the community to gather more often and in larger numbers. They are hoping to plan the first Jam on the Bridge. From my point of view, I’ve seen it have a pretty tremendous impact. There is reason to cross the bridge. People are doing it for exercise, for fun, for pictures, for the scenery. They park on one end and get a good walk in, get something to eat, go shopping. It just sort of connected everything in a way it wasn’t connected before.”

One more perk of the new bridge — which is deemed a part of N.C. Highway 210/50 — is the capacity to provide better hurricane evacuation. No one hopes to see that implemented any time soon.