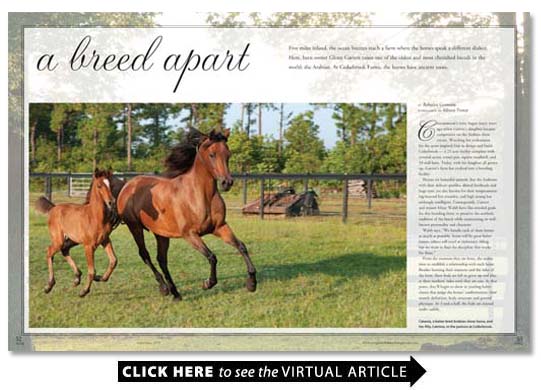 Five miles inland the ocean breezes reach a farm where the horses speak a different dialect. Here barn owner Glenn Garrett raises one of the oldest and most cherished breeds in the world: the Arabian. At Cedarbrook Farms the horses have ancient roots.

Cedarbrooks story began many years ago when Garretts daughter became competitive on the Arabian show circuit. Watching her enthusiasm for the sport inspired him to design and build Cedarbrook a 25-acre facility complete with covered arena round pen equine treadmill and 33-stall barn. Today with his daughter all grown up Garretts farm has evolved into a breeding facility.

Horses are beautiful animals but the Arabians with their delicate profiles dished foreheads and large eyes are also known for their temperament: big-hearted but sensitive and high strung but strikingly intelligent. Consequently Garrett and trainer Missy Walsh have like-minded goals for this breeding farm: to preserve the aesthetic tradition of the breed while maintaining its well-known personality and character.

Walsh says We handle each of these horses as much as possible. Some will be great halter horses others will excel at endurance riding but we want to find the discipline that works for them.

From the moment they are born she makes time to establish a relationship with each horse. Besides learning their manners and the rules of the farm these foals are left to grow up and play at their mothers sides until they are one. At that point theyll begin to show in yearling halter classes that judge the horses conformation: their muscle definition body structure and general physique. At 2-and-a-half the foals are trained under saddle.

Arabians are so versatile Walsh says explaining what she loves most about training these horses. They can do anything.

This might be why Arabians are so popular in the United States today. Along with their distinctive looks and personality theyve had tremendous success in a number of disciplines from dressage to western pleasure hunt seat to carriage driving.

All of our horses have been shown on some level Garrett says But many of them have regional and national titles in various disciplines. Actually Arabians have become so popular here and the breeding programs are so well-received that farms like Cedarbrook are getting international attention even from their homeland.

Our horses are all over the world now Garrett says But surprisingly many of our clients are from the Middle East.