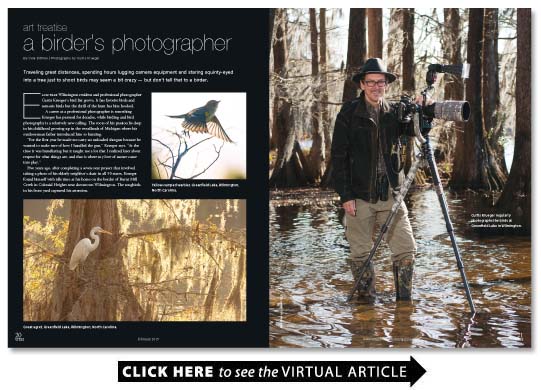 Traveling great distances spending hours lugging camera equipment and staring squinty-eyed into a tree just to shoot birds may seem a bit crazy — but don t tell that to a birder.

Each year Wilmington resident and professional photographer Curtis Krueger s bird list grows. It has favorite birds and nemesis birds but the thrill of the hunt has him hooked.

A career as a professional photographer is something Krueger has pursued for decades while birding and bird photography is a relatively new calling. The roots of his passion lie deep in his childhood growing up in the woodlands of Michigan where his outdoorsman father introduced him to hunting.

For the first year he made me carry an unloaded shotgun because he wanted to make sure of how I handled the gun Krueger says. At the time it was humiliating but it taught me a lot that I realized later about respect for what things are and that is where my love of nature came into play.

Five years ago after completing a seven-year project that involved taking a photo of his elderly neighbor s chair in all 50 states Krueger found himself with idle time at his home on the border of Burnt Mill Creek in Colonial Heights near downtown Wilmington. The songbirds in his front yard captured his attention.

Being a photographer I just started taking pictures of them and got some really decent images right in my front yard he says. But then I started counting birds a couple years ago. Birding has different divisions; there are bird watchers and birders. Bird watchers he explains identify a lot of birds and are really interested in them. The mindset of avid birders requires they count every bird they see and know all the species.

The devotion of birders was apparent when Krueger first attended a warbler festival in Ohio the Biggest Week in American Birding which takes place each spring on Lake Erie.

There are more people that show up at this park than you would ever imagine Krueger says. All kinds of different levels of birders all kinds of photographers the biggest lenses you will ever see. My jaw just dropped the first time. I thought I was semi-serious about this thing and then you see that.

For Krueger making the switch from shooting still lifes and landscapes to moving targets necessitated a shift in his thinking.

For most things in my photographs I am there ahead of time waiting for the light to turn perfect he says. With birds you try to put yourself in their habitat but whether you get close to it one day is just up to fate. I ve got the camouflage I ve got the blind ? by the end of it you have thousands of dollars of equipment in your hands just to take photos of little birds.

Combining bird photography with birding has also proved a challenge but so far Krueger has managed to identify and count 350 bird species in a couple of years.

You don t always get a really long look at a bird to be able to identify it he says. Being a photographer my birding is actually a lot slower than other birders because I really want a photo of it not just count it and move on.

To differentiate his work from other bird photographers Krueger has begun using his extensive experience in photo editing to manipulate bird images to make more arty compositions. Layering a variety of elements from different photos on top of each other Krueger produces an image with a silhouetted bird and colorful more abstract backgrounds.

When observing a bird Krueger can tell whether the image would be a good candidate for a sharp defined traditional bird photo or one of the more abstract prints based on lighting background and the bird s pose. A bird posed with bad lighting or a bad background could make for a good abstract print.

I am not just looking for that perfect light — it can be the perfect pose Krueger says. A lot of times I m looking at it as something that would be a good image by manipulating it.

To shoot birds Krueger has traveled everywhere from Bosque del Apache National Wildlife Refuge in New Mexico to the Florida Everglades. He also enjoys taking a walk around Greenfield Lake the Basin at Fort Fisher or Wallace Park to hunt. Regardless of where he is Krueger said approaching any subject or locale with an open mind is key to making a living as an artist.

I think a lot of making a living as an artist is you have to be adaptable Krueger says. I can t specifically say tomorrow I am going to wake up take this photo and it will sell. It just doesn t work that way. You come up with an idea you explore it and you hope it works.