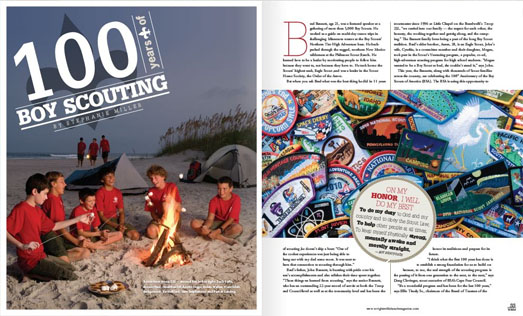 Brad Bennett age 21 was a featured speaker at a gathering of more than 5 000 Boy Scouts. He worked as a guide on multi-day canoe trips in challenging Minnesota waters at the Boy Scouts Northern Tier High Adventure base. He backpacked through the rugged northern New Mexico wilderness at the Philmont Scout Ranch. He learned how to be a leader by motivating people to follow him because they want to not because they have to. He took home the Scouts highest rank Eagle Scout and was a leader in the Scout Honor Society the Order of the Arrow.

But when you ask Brad what was the best thing he did in 11 years of scouting he doesnt skip a beat: “One of the coolest experiences was just being able to hang out with my dad some more. It was neat to have that connection to scouting through him.”

Brads father John Bennett is bursting with pride over his sons accomplishments and also relishes their time spent together. “Those things we learned from scouting ” says the senior Bennett who has an outstanding 22-year record of service at both the Troop and Council level as well as at the community level and has been the scoutmaster since 1996 at Little Chapel on the Boardwalks Troop 232 “we carried into our family the respect for each other the honesty the working together and getting along and the camping.” The Bennett family loves being a part of the long Boy Scout tradition. Brads older brother Aaron 28 is an Eagle Scout Johns wife Cynthia is a committee member and their daughter Megan took part in the Scouts Venturing program a popular co-ed high-adventure scouting program for high school students. “Megan wanted to be a Boy Scout so bad she couldnt stand it ” says John.

This year the Bennetts along with thousands of Scout families across the country are celebrating the 100th Anniversary of the Boy Scouts of America (BSA). The BSA is using this opportunity to honor its traditions and prepare for its future.

“I think what the first 100 years has done is to establish a strong foundation for us to build on because to me the real strength of the scouting program is the passing of it from one generation to the next to the next ” says Doug Clevinger scout executive of BSAs Cape Fear Council.

“Its a wonderful program and has been for the last 100 years ” says Ellis Tinsley Sr. chairman of the Board of Trustees of the Council. A Wrightsville Beach resident and one of a long line of Tinsley Boy Scouts scouting for more than 75 years Dr. Tinsley Sr. learned from his father the value of scouting and passed it on to his sons and his sons passed it on to their sons.

Traditional values have attracted many new families with no scouting history. “Size doesnt matter ” says Andrew Zeldin district executive Masonboro the Wilmington hub. There are many ways a boy can be successful in Boy Scouts. “Its not whos the toughest. Its about mental physical character strength.”

Zeldin tells the story of a young man with a physical and mental disability who worked through the Cub Scout program and spoke to a group of 70 people about his experience. Standing in front of that audience the Scout felt so proud and there wasnt a dry eye in the room. “It speaks to the philosophy of kids being able to succeed advance and be rewarded for hard work ” Zeldin says.

Zeldin recalls a meeting he had scheduled at a church that was interested in chartering a Cub Scout troop. His father-in-law a big Duke fan had scored some tickets to the ACC tournament with Duke in the finals for the same night as the meeting. The father-in-law offered the tickets to Zeldin who chose to go to the meeting instead. The Pastor of the church was a Duke grad and the two men joked about skipping town together and going to the game. When the time came to speak and Zeldin told the gathering about the tickets and why he chose the meeting over the game how scouting helped him become a better person five parents signed on as leaders.

Parents are a cornerstone of the organization. They accompany their young Cub Scout to his first meetings and can take on leadership or support roles over the years.

The goal of the Scouts is to strengthen family bonds whether parents attend meetings or not. The parents are the ones to “pass their son off” on some of his rank advancements things like setting the table at home. “A boy doesnt instinctively know how to set the table ” says scout executive Clevinger. “A mom has to be there to help him to show where the proper place is for the fork where the glass goes. Thats just a small example of good-quality moments that mother and son get to spend together and that boy learned something from the process. And from the process of learning something he got to spend a few precious moments with his mother.”

The boys teach each other too and in the process learn how to be independent. Kyle Davis 16 is a member of Troop 232 and one of the youngest troop members to be elected to a leadership position. “The troop should be run by the boys not the adults ” says Davis. “Theyre there to watch over us and give us a little bit of correction but its the senior patrol leader who figures out what the boys want to do and how to make it happen.”

The transition from Cub Scouts to Boy Scouts is a critical one and Davis remembers that time. “The older boys come down and talk with the younger guys and show them all the cool things they get to do when theyre older. You get to carry a knife and play with fire ” says Davis laughing. “Thats attractive I guess.”

Boy Scout values have stayed the same over the last 100 years but the times and the nature of being a boy in todays world has gone through seismic shifts. There are a lot of distractions that keep kids isolated. BSA is all about interaction young people interacting with good adult role models interacting with the out-of-doors learning new skills hands-on activities. “Its not the boys whove changed its the outside influences that have changed ” says John Bennett. Good citizenship good community involvement and physical fitness have always been the bedrock of the BSA. “There has been a lot of pressure for scouting to compromise and weve not done that. Its one of the things I respect so much about the Scouting program ” Bennett says.

The Boy Scouts have had their share of controversy when it comes to compromise or lack thereof but they have held firm to their values and have emerged even stronger. In the Cape Fear Council which includes New Hanover Brunswick Pender Scotland Hoke Robeson Bladen and Columbus counties their numbers remain solid with more than 5 000 scouts paired with 15 000-16 000 volunteers.

The Boy Scouts national organization has a storied history beginning with its founder William D. Boyce a multi-millionaire businessman. Boyce discovered the Boy Scouts while stopping off in London en route to Africa in 1909. While there as legend has it Boyce got lost in the dense London fog and was guided to safety by a Boy Scout. Impressed by the boys sense of duty Boyce learned more about the organization and imported it to the United States. The Boy Scouts incorporated in February 1910 when 34 national representatives of boys work agencies met in temporary headquarters in a New York YMCA. Along the way there have been many milestones. In 1911 the Scout Oath and Scout Law were adopted. The Order of the Arrow BSAs honor society was introduced in 1915. Cub Scouts was formally launched in 1930. By 1980 there were 30 million Cub Scouts.

Scouts have a long history of service during difficult times. They were called on during the 1918 influenza epidemic and again in 1934 when President Roosevelt asked for their help with the distressed and needy.

Closer to home the YMCAs Boys Department launched the organization here in 1914. The present name Cape Fear Council BSA was made official in 1989.

Local celebration of the 100th anniversary has been packed with events reporting to the Governor in February an Eagle Scout gathering at the Court House had more than 200 Eagle Scouts in attendance. Troop members spent time over the past year carving a 20-foot totem pole that sits at the entrance to Camp Bowers in Bladen County a “striking symbol of the 100th Anniversary celebration ” says Clevinger. “And were not stopping there ” he says. “Were going to make sure that every generation in the years to come benefits from scouting.”

For information on how to register your child as a Scout or how to get involved as a volunteer in the Scouting program call Andrew Zeldin at (910) 395-1100 ext. 21 or e-mail him at [email protected].

For more information about the local Scouting program and the Cape Fear Council visit the web site at www.capefearcouncilbsa.org. Happy Scouting!

“One can only imagine what a Scout customer in 1910 would think about todays Merit Badge offerings that include Nuclear Science and Aviation. The BSA has altered added or eliminated many Merit Badges from the original 57. “Core” outdoor skills Merit Badges such as Camping and Canoeing health related Merit Badges such as First Aid and Personal Fitness and responsibility/civic related Merit Badges such as Citizenship in the Nation and Citizenship in the World have been “required” in some form or fashion since 1910. During the past century some of the core Merit Badge names and requirements have changed to keep pace with evolving youth interests and advances in technology and knowledge but the content of required Merit Badges necessary to achieve the rank of Eagle Scout has remained relatively unchanged for 100 years.” Chad Paul Eagle Scout 1983 Assistant Scout Master Troop 232